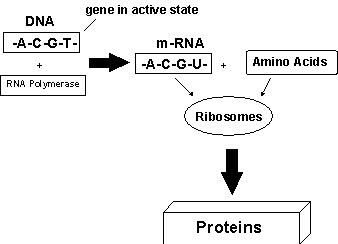 The transcription of information from DNA to mRNA is where non-coding DNA is encountered (Figure 2). 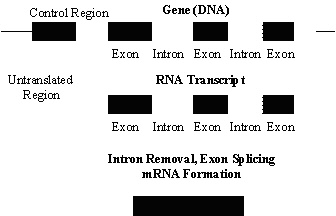 A gene is a length of both coding and non-coding DNA comprised of specific regions termed exons, introns, and control regions. Exons contain coding DNA strands that will ultimately be translated into portions of the protein. Introns consist of non-coding DNA interspersed among the exons. The control regions facilitate gene transcription regulation and identification. Genes are initially transcribed into an RNA transcript containing the introns and exons transcribed from the DNA introns and exons. The RNA transcript is then processed to remove the introns and to combine the exons to form the mature mRNA molecule. The mRNA then leaves the nucleus and finds the ribosomes (Figure 1).

There were two lines of evidence that non-coding DNA was non-functional. First, the sequences in exons, but not introns, were "conserved" (i.e., the same or very similar) among members of the same species, implying exon sequence was crucial to survival and intron sequence was unimportant. Second, large variation in intron sequence had little impact on the organism as a whole. Evolutionists, assured of the non-functional status of non-coding DNA, claimed "junk" DNA was evidence for evolution and against intelligent design. A designer would never create a DNA sequence 99% of which was meaningless junk, they reasoned. Further, they claimed that "junk" DNA is what would be expected from a random and imperfect process of mutation and selection. Allegedly, coding DNA sequences would evolve because of their potential impact on survival while non-coding DNA, presumed to be genetic remnants of evolutionary ancestors, would remain essentially unchanged (during evolution) because they were immune from selection pressures. Hence non-coding DNA was regarded as a record of an organism's phylogenetic history.

But the evolutionists were premature in their judgment about what evolutionary theory predicted and about the non-functional status of non-coding proteins. DNA is a fairly fragile molecule, often incurring damage and needing repair. The maintenance of DNA is a resource-demanding enterprise requiring many enzymes for copying sequences and correcting mistakes—an enterprise requiring much energy. Why would natural selection maintain useless DNA at such a high cost? It probably would not.

There is evidence that protein sequences are optimized to reduce the energy requirements for their production. It has also been experimentally demonstrated that non-coding DNA can be easily lost in just a few generations in a fly species. Because there is evidence for selection of resource-efficient processes and there exist readily available mechanisms for eliminating non-coding DNA, the persistence of non-coding DNA sequences strongly suggests this "junk" DNA may actually be functional. Also, if useless DNA were ever accidentally "switched on" by some mutation, the resulting RNA and protein would at best waste resources and at worst even be harmful; surely selection would have eliminated this potential difficulty. Cave dwelling fish that have lost their vision and birds on isolated islands that have become flightless serve as good examples of what selection does when a function is no longer needed; the useless function is eliminated.

Several functions of non-coding DNA are now known. Untranslated portions of mRNA serve as sites of attachment to ribosomes (Figures 1 and 2). Organisms with an increased genome size usually develop more slowly. Some species of salamanders with a larger than usual genome (contain more non-coding DNA) are better able to survive in cold environments due to a reduced metabolic rate. Introns apparently facilitate gene regulation and organization. Introns may guide the folding of DNA in the nucleus thereby ordering gene expression (creates an index) and hence development of an organism. Some introns catalyze their own removal during the RNA transcription process revealing a level of complexity previously unappreciated. Some introns are now thought to code for RNA that plays a role in ribosome production and regulation. Non-coding DNA may signal the expression of some genes and the repression of others. The length of the untranslated portion of mRNA (Figure 2) can determine the RNA cytoplasmic half-life (how well it binds to the ribosome) and thus its rate of expression into proteins. Non-coding DNA on the ends of chromosomes help maintain integrity of the chromosomes and thereby perpetuate cell lines. Some non-coding DNA repairs breaks in broken DNA. There is evidence that some non-coding DNA sequences may help bacteria to adapt to otherwise lethal changes in their environment. Non-coding DNA may also be the genetic material used for microevolutionary changes. This would help explain how some organisms can have significant changes to their phenotype in a few generations, much faster than a mutation/selection mechanism could operate, even if beneficial mutations were highly probable.

And so the theory of "junk" DNA seems to be going the way of vestigial organs. At one time, there were over 100 human organs alleged to be vestiges of ancestral evolutionary forms.2 Today there are only a few dubious examples remaining. As medical science discovered the functions of these organs, vestigial organs lost their status as evidence of evolution. The same is true of non-coding DNA. Few scientists now consider non-coding DNA to be non-functional. Nevertheless, evolutionists now have other ways to claim that non-coding DNA is evidence for evolution! It seems that whether non-coding DNA is functional or non-functional, evolutionary theory predicts it!

As Christians we should have known that non-coding DNA would someday be shown to have function because God made it.

"I will praise thee; for I am fearfully and wonderfully made: marvelous are thy works; and that my soul knoweth right well." Psalms 139:14 (KJV)

"O Lord, how manifold are thy works! in wisdom hast thou made them all: the earth is full of thy riches." Psalms 104:24 (KJV)