"For sheer numbers, no other ocean beings can match viruses. Thousands, sometimes even millions of these molecular parasites inhabit every drop of surface seawater, outnumbering even bacteria by 10 to 1... evidence that suggests that viruses are a powerful force in the sea, and one that determines how many plankton and ultimately how many fish, and even humans, an ocean ecosystem can support... viruses must have a profound influence on the WHY DID GOD CREATE VIRUSES?

A major line of reasoning used to argue against the creationist worldview is ‘why a benevolent God would create pathogenic organisms whose sole function seems to be to cause disease and suffering?

Given the current state of the United State's vaccine supply and the US Public Health Service's ominous forecasts for this flu season, this question is likely to be on the minds of more than just anti-creationists this year. Chiron, a major manufacturer of flu vaccine, will not be distributing any influenza vaccine this flu season, and on October 19, 2004, HHS Secretary Tommy G. Thompson announced to a worried public that, in order to ensure an ample supply of influenza vaccine for the most vulnerable Americans, people not in the priority categories should forgo getting the flu vaccine because it takes a shot away from someone who needs it more (http://hhs.gov/news/press/2004pres/20041019a.html). 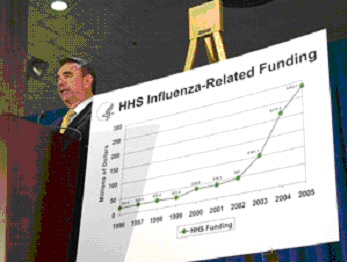 The Work of a Benevolent God?

The account of Noah and the flood is often criticized by the claim that God must have wanted pathogenic viruses in the world: because they exist today, God must have brought them on the ark. 1 However, the common public perception that the only function of viruses is to cause disease is incorrect. It is true that viruses cause many common diseases such as cold sores, hepatitis B, herpes, yellow fever, viral meningitis, chicken pox, colds, mononucleosis, mumps, rabies, polio, shingles, smallpox, warts, viral pneumonia, AIDS and some cancers. However, research has now found a substantial amount of evidence that they serve several major roles in ecology and are actually essential for life. They serve numerous beneficial functions that we are just beginning to research and understand. 2

The relation between viruses and their hosts is complex, and usually begins when a virus makes contact with a potential host cell. All known life forms can be “infected” by viruses, but some life forms appear to be less prone than others; for example, some species such as arthropods and gymnosperms can carry viruses without experiencing adverse effects. 4

Attachment: Viruses and all animal cells contain projections, typically glycoproteins, that allow a virus and animal cell to make contact and to chemically and mechanically bond. To infect a cell, the antigens on the virus surface must fit into the cell's receptor sites. The fit is usually species-specific; thus a specific virus type will infect only a specific animal or plant type. However, some virus types such as rabies and influenza have a wide range of hosts.

Penetration: Subsequent to attachment, most viruses are drawn into the cell by a process called endocytosis, the same process the cell uses to take in nutrients. Some virus types can pass directly through the pores in the host's cell membrane and others, such as bacteriophages, remain outside the cell but inject their DNA into the cells (Figure 1). 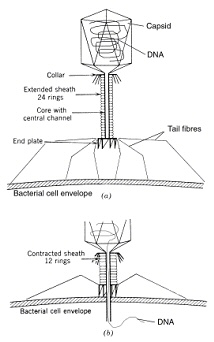 Figure 1 - The bacteriophage injection mechanism is an example of a complex accessory structure that enables viruses to bind to the host cell. a) virus attaches to host cell with sheath extended. b) sheath contracts injecting bacteriophage DNA into host cell. 5

Transfection: The viral DNA is spliced into a specific site on the host DNA by integrase. The enzyme does this by cutting the circular plasmid DNA, then splicing in the new DNA and repairing the two splice sites.

Replication and Synthesis: The viral DNA or RNA directs the host cell to produce copies of viral nucleic acids and proteins, including enzymes.

Assembly: Once inside the cell, the virus can set up what might be likened to the biological equivalent of an assembly line (Figure 2). In one type of phage the tail is assembled by first constructing the protein scaffolding. Protein building blocks are then added one at a time. This process of addition stops when another protein acting as "measuring tape" determines that the tail is the proper length. A signal is then produced indicating that the structure is complete and the scaffolding protein detaches to be used again in making other virus tails.

Release: The new viruses are released from the cell to infect other cells, spreading even more genes to other cells.

Where Do They Come From? Figure 2 - Replication cycle of a bacteriophage 6

Some evolutionists hypothesize that viruses "evolved" from bacteria by natural selection. In this process, as they become parasites, they lost all the complex protein structures that bacteria require. Others hypothesize that viruses were the first form of life, and that bacteria evolved from them (as did all other life). The fatal problem with this theory is that viruses are not living, and in order to reproduce and to make ATP, they require all of the complex cellular machinery present in bacterial cells. Other scientists speculate that a reverse symbiosis occurred, and that viruses arose out of cell parts such as bacterial plasmids and other organelles, and eventually evolved into separate forms of life. 7

So far evidence is lacking for each of these theories. Both bacterial plasmids and viruses contain the nucleotide sequences required to initiate replication. While these structures are necessary for the function of each, this does not prove either's phylogeny. Further, all "ancient" viruses so far discovered in "ancient" amber and other places are fully developed, functional viruses.

What Good Are They?

According to Jerry Bergman, the importance of viruses is closely related to the importance of bacteria, which supply our fertile soil and atmospheric gases. 8  Bacteria cleanse our water supply, play a role in stabilizing the atmospheric nitrogen concentration, and regulate the acidity or alkalinity of the soil environment.

Scientists now believe that viruses have a relationship with bacteria that is akin to bees carrying pollen from flower to flower, thus causing cross-fertilization. Viruses carry not only their own genes, but also those of other creatures, especially those of bacteria. 9  Walter ReMine believes that God intentionally created and released life forms into the environment in a particular time sequence, much like a computer goes through a sequence of distinct stages during its "system bootup" process. 10  The bootup of an entire planetary biosphere would have many problems. Perhaps our designer God had to solve these problems by releasing organisms, like viruses, in a particular timed sequence, each stage building on the previous one.

If viruses are a part of God's amazing plan that allows life on earth marvelous adaptive abilities, it would make sense that He would provide us with instructions for dealing with the more troubling aspects of their existence. In a previous article (January 2004, An Ounce of God Ordained Prevention is Worth a Ton of Worldly Cure) we discussed the amazingly effective Mosaic rules regarding hygiene that God ordained well before the concept of viruses and germs was discovered.

However, thousands of virus types exist in host cells without problems. Problems that do cause disease are a result of reshuffling of virus genes, genetic mutation of the host, or a breakdown in the general health of the host organism. Research is showing that viruses are a critical part of life. Holmes has noted:

"For sheer numbers, no other ocean beings can match viruses. Thousands, sometimes even millions of these molecular parasites inhabit every drop of surface seawater, outnumbering even bacteria by 10 to 1... evidence that suggests that viruses are a powerful force in the sea, and one that determines how many plankton and ultimately how many fish, and even humans, an ocean ecosystem can support... viruses must have a profound influence on the entire oceanic ecosystem. When protozoans eat bacteria, energy passes along the food chain leading from protozoa to other zooplankton to larger predators, including fish. But when virus-infected bacterial cells burst, their energy-rich cell contents spill into the water for other bacteria to scavenge. ‘Viruses tend to keep nutrients away from the big stuff and keep them going around in the little stuff,' says Fuhrman. If so, viruses have shaped the entire structure of the ecosystem." 11

The instructions recorded by Moses in Leviticus, Exodus, Numbers and Deuteronomy are strikingly similar to the Center for Disease Control's recent flu-prevention advice (http://www.cdc.gov/flu/protect/0405shortage.htm).