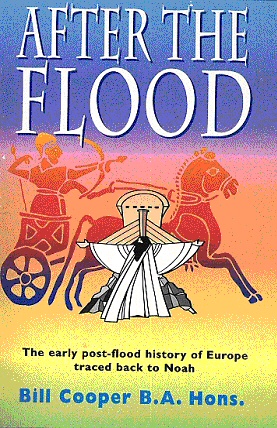 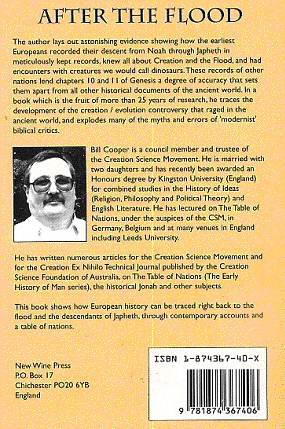 Cooper began investigating the part of Genesis which names names—the part that tells of the ancestors of nations. He reasoned that if the record of Noah and his descendants given in Genesis were true, then there should be some mention of the names of these individuals in the records and documents of other Middle Eastern nations, in addition to the Bible. Allowing for the vast time periods involved and possibly the loss of documents due to decay, etc., he decided that if only 40% of these names could be found, he would be satisfied. To his amazement, he found not only 40% but over 99% of the names to be verified.

He then went beyond this test. He went outside the bounds of the Middle East to carry his search into Europe, specifically requiring that the documents and records had to date from a time before any European nation was converted to Christianity. Therefore, there would be no possibility of copying the names from Christian documents. Cooper wrote concerning the Biblical account in Genesis, chapters 10 and 11:

"The Table of Nations had listed all the families and tribes of mankind in their correct groupings, whether those groupings were ethnological, linguistic or geographical. All the names, without exception, were accurate, and in more than twenty-five years of searching and analyzing, I uncovered not one mistake or false statement of fact in the Table of Nations.

"It has to be said here that such a result could simply not be expected or obtained from any comparable historical document, especially one as ancient as this."

There we find record of the three sons of Noah—Shem, Ham, and Japheth. In the mythology of the old world, Japheth was regarded as the father of many peoples. The Greeks called him Iapetos, the son of heaven and earth and the father of many nations. He is called Pra-Japati in the Sanskrit Vedas of India, Father Japheth, the sun and lord of creation, the source of life for his descendants. Romans called him Ju-Pater, Father Jove, and later Jupiter. Saxons traced their royal house from him, whom they called Sceaf. Cooper reminds us that all these peoples were pagans who had no knowledge of Genesis.

Gomer, the first son of Japheth, fathered the Cimmerians who lived near the Caspian Sea. Riphath was a son of Gomer. His descendants were named Riphaei by Pliny and Riphaces by Melo. The similarity in names is apparent: Riphath (Genesis) - Riphael (Pliny) - Riphaces (Melo).

Documents from the 14th century BC tell of Tegarama, a region where descendants of Togarmah settled. Togarmah was another son of Gomer. Again, note the similarity in the names: Tegerama and Togarmah.

Yet much of the history tracing man's origins and the origin of nations back to the flood has not been included in our history books. Why?

The history of the early Britons was practically "erased" because of the massacre of British Christians by Rome near the end of the sixth century AD. This included many scholars and monks. Then, for about 500 years, only Roman, Saxon, and later Norman versions of history were taught.

But in the 1130s archdeacon Walter of Oxford gave a book to the British monk Geoffrey of Monmouth. The book was a very ancient copy of the history of the early Britons, whose language was even then so ancient that it sorely needed translating into Latin before the language became forgotten. However, this book has been criticized. Some criticisms, along with answers, are listed below:

Why then the criticism of the book? Cooper tells us, "... it is an account that flies entirely in the face of everything that we are taught nowadays about where we come from, ..."

Cooper gives much evidence that the book of Geoffrey of Monmouth is not a forgery. He gives an account of the descent of six Anglo-Saxon royal houses from Woden, who is traced back to Japheth and Noah. There Cooper gives six lists from four nations, which trace the ancestry of Woden. A comparison of these lists indicates that Woden is descended from Noah.

Cooper points out that after the fifth generation following the flood, the lines of the British and Irish Celts diversify. Before that, the four names of their ancestors are common to both. And it is in the fifth generation after the flood that, according to the Bible, the dispersal of the nations from Babel took place! This would of course explain the separation of these two lines of descent.

Cooper writes, "...we note in these ancient genealogies that after the fifth generation the Irish and continental pedigrees diverge in a most pointed way in exact accordance with the Genesis account."

Now, let's look back to something mentioned earlier—the appearance and development of some civilizations faster than one would expect. This has been said of Egypt and others.

Consider this: after the Flood, there was no civilization left; but, just as Noah had prepared for a world after the flood by bringing animals on the Ark with him, perhaps he had also prepared by bringing with him source texts of technical knowledge. Certainly, knowledge of agriculture, architecture, mathematics, and other types of knowledge would prove useful if one were basically starting all over again to rebuild a whole world. It makes sense to bring such knowledge along.

And, if such knowledge was available to the early builders and founders of the most ancient civilizations, then we would expect them to develop somewhat more rapidly than if they were starting out from scratch, with no accumulated knowledge.

There is much more in Cooper's book. For example, the descent of a Chinese people, the Miautso, from Adam, with similar names to those found in Genesis, based on their own oral history and without having the Bible to copy it from.

A very interesting area of research is dealt with in Cooper's book, showing amazing corroboration of the Biblical account of the descent of nations from Noah. To quote one reviewer, "This book is bold in its thesis, well argued in its analysis, fascinating in its detail and will no doubt be particularly controversial to those scholars whose assumptions and paradigms it seeks to refashion."