There are many natural phenomena which evolutionary geologists say require many thousands or even millions of years to bring about. However, creationists have long held that most geologic processes can take place quickly if the conditions are right. Some of these phenomena include formation of the Precambrian granite "basement" rocks of the earth's crust, radioactive decay, canyon formation, petrified forest formation, coal formation, the rapid laying down of several successive sedimentary layers, formation of clastic dikes, formation of vast fossil graveyards, and stalagmite and stalactite formation.

Evidence for the rapid formation of the granite basement rocks of the continents has come from the study of polonium radiohalos. 1  Polonium">www.halos.com Polonium is one of several elements in the uranium radioactive decay chain which ends in lead. Polonium decays by emitting alpha particles (helium nuclei) with kinetic energies characteristic of polonium. The alpha particles penetrate the surrounding rock, eventually coming to rest and converting into helium gas by picking up two electrons from the environment. The rock is discolored at the location the alpha particle comes to rest. After enough alpha particles have been emitted, a sphere of discoloration results. Cross sections of the sphere appear as a ring that is called a radiohalo. Eventually the decay products of polonium will be converted into lead. The lead formed can be analyzed for its isotopic composition. Different elements give different halo patterns and different lead isotope products.

Most elements which form radiohalos are thought to have been derived from uranium and moved through the granite by hydrothermal action. Indeed, the pathways or alpha recoil tracks connecting parent and daughter elements in granite can be detected, even if there is only one recoil event. Studies have shown that there are millions of polonium radiohalos in granites which have rings and lead that are derived only from polonium and that have no alpha recoil tracks connecting them with precursor elements. Another interesting fact about radiohalos is that they fade when heated to temperatures well below the melting point of granite. Since some polonium isotopes have short half-lives (one isotope has a half-life of less than 1 second), the only conclusion left to explain the parentless status of these radiohalos is fiat creation. In other words, the polonium must have been created at the same time as the granite and when the granite was relatively cool. This suggests that the basement granite rocks of the earth formed almost instantaneously, as if someone had spoken them into existence! 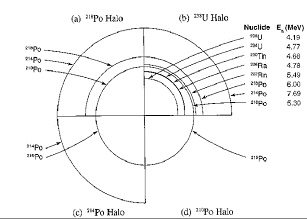 There is now rock solid evidence for rapid radioactive decay having occurred sometime in earth's history. 2  The helium formed from radioactive decay is often formed within granitic minerals called zircons within another mineral called biotite. Laboratory investigations have shown that the rates of diffusion of helium through zircons and biotite are rapid processes. The uranium radiohalos in biotite are often fully developed, having rings from many of uranium's daughter products and the lead isotope composition expected from several parents; much helium must have formed from all this decay. Interestingly, the amounts of helium found in biotites today is much larger than expected based upon the known rate of helium diffusion and the assumption that the rates of radioactive decay of uranium and its daughter products have always been what they are now. The hypothesis that explains all the data is one or more episodes of rapid and extensive radioactive decay in the recent (last 6000 years) past; the helium has simply not had enough time to diffuse from the rocks. This idea also fits nicely with the lower than expected (assuming constant decay rates) amounts of helium found in the atmosphere. The episodes of rapid radioactive decay may have occurred during the first three days of creation week and the early stages of the Flood.

The volcanic eruptions at Mt. Saint Helens in the early 1980s were a gold mine for creation geologists. 3 On May 18th, 1980 a volcanic eruption equivalent to 30,000 atomic bombs (Hiroshima) caused a loss of 1,300 feet in elevation; flattened 150 square miles of forest in six minutes, and resulted in a 0.5 cubic mile landslide. The landslide resulted in an 860-foot wave in nearby Spirit Lake, which washed a forest into the lake.  Afterwards the lake was covered with 1 million logs without bark, branches, or roots.

The landslide also left a crater and lava dome. Mud slides from three eruptions over a two year period formed over 600 feet of finely layered strata.  A canyon 1/40 scale of the Grand Canyon was cut through solid rock in one day! The canyon now has a stream running through it giving the appearance that the stream cut the canyon over a long time span, but in fact the canyon was formed first. The potential for catastrophic events to do serious geological work was forever demonstrated.

The 600 feet of strata revealed extensive sorting and layering as if laid down by a slow uniform process over a long time span. Rapid successive sedimentary layer formation is also suggested in many places by the lack of bioturbation, the lack of soil layers, the presence of polystrate fossils, soft sediment deformation, and the limited extent of unconformities. 4

Bioturbation refers to the evidence of biological activity which would be expected in a sedimentary layer if it had persisted uncovered long enough for a biological community to fluorish. Lack of bioturbation in a layer suggests the layer did not remain uncovered for much time. Soils would also be expected to form on a layer, which remained uncovered; lack of soils between layers suggests little time between deposition of the layers.

The existence of polystrate fossils such as trees which extend dozens of feet through many layers clearly demonstrates rapid successive layer formation. Once layers are laid down they tend to dry out and become brittle over time. Then if an uplift event occurs in some locality, the brittle layers will crack and break where the layers were uplifted next to layers that remain in place. The uplift of layers without cracking suggests that the sediments were still soft when the uplift event occurred. The layers would have been soft during the uplift event only if they had been freshly laid down together. There are sedimentary layers in the Kaibab monocline at Grand Canyon that make 90° turns due to uplift events yet without any evidence of cracking. 5  Unconformities occur where the usual flat and parallel layering of sedimentary strata is disturbed by layers, which lie at an angle relative to the horizontal layers.

This structure suggests there was a significant period of time between the deposition of the horizontal and tilted layers. However, if the layers are followed out laterally far enough (hundreds of miles), one often finds that the tilted and horizontal layers become parallel with no evidence of an event between them. Thus the limited extent of unconformities shows that there may not have been the vast time spans between layer deposition initially suggested by the unconformity.

Clastic dikes are another evidence for rapid successive layer formation. Clastic dikes are vertical shafts of material cutting across several sedimentary layers. Some clastic dikes contain sand grains and are believed to have formed from the top down by the erosion and transportation of material down through openings in the layers. However, there are cases where the sand grains in the dike have the same particle size and distribution as deep laying sandstone layers. Evidently, the material originated in sandstone layers below and was raised and injected under pressure into the vertical openings in the layers above. The key fact is that the sandstone layers must have been soft for this process to work. This implies that the sandstone layer and all layers above it were relatively fresh when the dike was formed or, in other words, that the layers must have been deposited in the same timeframe.