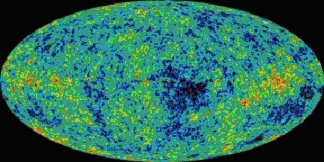 The oval map represents the whole sky, like the spherical Earth is represented as an oval on a flat sheet of paper. Different parts of the map relate to different parts of the sky. Different colors represent variations in the CMB with "warmer" as red and "cooler" as blue. Science News writer Ron Cowen2 likened the astronauts that unveiled this snapshot to "beaming parents showing off pictures of their newborn." Indeed, the WMAP photo, which is alleged to depict our infant universe, shares several other characteristics of a newborn child, characteristics that its worldly parents are not likely to focus on.

Like a baby, the WMAP photo can do no wrong in the eyes of its parents. Overall, the information provided by WMAP is not new but is alleged to be more precise than early measurements. The parents of this portrait claim that it "pegs the universe's age to an unprecedented accuracy of 1 percent." A pretty picture indeed! However, as in all things, beauty is in the eyes of the beholder. For several years now NASA has touted CMB as confirming the Big Bang, as well as the universe's age, composition, geometry, ultimate fate, etc. However, behind these claims are an enormous number of philosophical assumptions. Dr. John Hartnett, a creationist physicist writes, "In short, the big bang is first assumed to be true and they adjust their parameters to get the theory to fit the data. Because of this circular reasoning, it would be a miracle if it did not ‘confirm' the big bang." 5

Like a baby, the WMAP photo is protected against public criticism by unwritten rules of secular social etiquette. Have you ever known anyone to begin an argument with the statement, "Everyone knows that [insert idea]?" If everyone really knew, then why bring the subject up? Such statements are usually meant to convey that "you won't be very popular if you don't agree that [insert idea]." Alan MacRobert declares in the article Mapping the Big Bang in Sky and Telescope (www.skyandtelescope.com) that the NASA report "has powerfully confirmed the conclusions that many teams of astronomers had already reached." Dr. Charles L. Bennett, of the Goddard Space Flight Center (GSFC) in Greenbelt, Maryland and the WMAP Principal Investigator, is quoted in NASA's press release, "The data are solid, a real gold mine." How can a gold mine come from confirming what people already know? MacRobert states that "the big news is actually no news." This is something that both secular and creationist scientists can agree on, but for different reasons.

Like a baby, the WMAP photo is bound to cause problems. As mentioned earlier, the WMAP results are not new, but are more precise than similar maps produced from instruments measuring CMB from the ground, and from balloons, and from its predecessor, the COBE (Cosmic Background Explorer) satellite. The big picture has not changed. As Dr. Hartnett describes in his relatively recent report, CMB actually poses problems for the big bang and supports creationist cosmologies. Contrary to the basic assumption behind the big bang, CMB seems to indicate a preferred frame of reference. Several other problems are pointed out by Dr. Hartnett in his article, and this latest NASA report itself said that the stars formed earlier (by their own dating methods) than previously predicted.

Like babies, the WMAP photo is ultimately a reflection of its true Father, our Creator God. Creationist cosmology models do not have the problems mentioned above and discussed by Dr. Hartnett. 6,7 In fact, Dr. Hartnett contends that recent findings pertaining to CMB are consistent with creationist cosmologies. Don't misunderstand. Creationists' models are not and never will be perfect. They, like secular models are designed by fallible scientists, whose theories change on a weekly basis. Yet, by faith we understand that the heavens were prepared by our Creator God. And through this same faith we can rest assured that, despite limited funding and resources, if any model of our universe should eventually succeed in describing all phenomena, it will be a creationist model.