Have scientists discovered evidence that humans are descended from ape-like ancestors? Are there real "missing link" fossils to prove this? Well, one of the reasons the term "missing link" is what it is, and includes the word missing, is that the evidence has long been—missing. Some have argued that this or that fossil is the "missing link", so we will examine a few of them.

There has been Piltdown Man, which was admittedly a hoax. The teeth were filed, and the bones chemically stained to alter the appearance. Then there was Nebraska Man, which was built out of a pig's tooth. This tooth was presented as evidence for evolution at the famous Scopes trial.

It is suspected that Neanderthal Man was simply a normal human with some medical problems—possibly arthritis, rickets, or acromegaly. Scientists now classify him as human.

But what about the drawings? We see pictures showing the "missing links" with their hairy bodies, their crouching gait, and so forth. Since this is what they looked like, weren't they obviously ancestors of humans? These pictures do show something between a man and an ape; however, the question is not whether the pictures show something between man and ape, but whether the actual creatures looked at all like the pictures. So, did they? 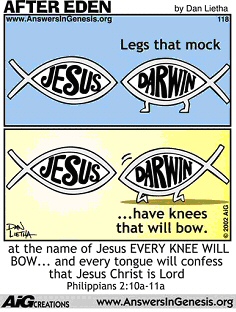 "Unfortunately, the vast majority of artist's conceptions are based more on imagination than on evidence. But a handful of expert natural history artists begin with the fossil bones of a hominid and work from there... Much of the reconstruction, however, is guesswork. Bones say nothing about the fleshy parts of the nose, lips or ears. Artists must create something between an ape and a human being; the older the specimen is said to be, the more apelike they make it... Hairiness is a matter of pure conjecture. The guesswork approach often leads to errors." 1

We cannot trust that the pictures give an accurate portrayal of what the creatures actually looked like. In the case of Ramapithecus, based on nothing more than jaw bones and teeth, a model was created and displayed. Nebraska Man was pictured as a family group of ape-men. Remember now that this was based on nothing more than one tooth, and that of a pig (erroneously labeled as an ape-like pre-human tooth). So artwork may look ape-like, human, or something between, but that does not prove what the creatures really looked like.

Quoting again from the above web page:

"In 1992 Dr. Ian Tattersall stated in Evolutionary Anthropology that ‘it is increasingly clear that Homo Habilis [sic]has become a wastebasket taxon, little more than a convenient recipient for a motley assortment of hominid fossils from the latest Pliocene and earliest Pleistocene...' In other words, any primate bones they can't label as ape or human may become Homo Habilis [sic] specimens." 1

Pithecanthropus erectus was discovered by Eugene Dubois. He admitted late in his life that this was not a man, but a giant gibbon (a type of ape).

Now, consider Australopithecus. One problem mentioned by some researchers is that there are not any bones of chimpanzees near the locations where bones of Australopithecus have been found. Although bones of other animals are found nearby, the bones of modern apes are not. Why?

What if the missing ape bones are the bones of Australopithecus? This would explain their absence—the "missing" ape bones would then actually be present.

Could such an error be made? Consider the case of Ramapithecus. This "missing link" was described as walking upright by its discoverer. However, there were no leg or hip bones found—only jaw bones. Yet these jaw bones were enough to describe the creature as walking upright. Later, the discoverer admitted that he had said that it walked upright simply because he had wanted it to walk upright (not because of any evidence to that effect). Later, after discovery of more bones, it seems that this creature is actually an orangutan.

One of the top forensic anthropologists in the country has stated that often medical men (pathologists) mistake pig bones for human bones. Sometimes, people find what they are looking for, even if it's not there.

A book by an evolutionist described this phenomenon—of allowing what one wants to find to distort one's conclusions in spite of, and even contrary to, the evidence. The book is The Mismeasure of Man, by Stephen Jay Gould. In it he describes how one man let his preconceived opinion determine his description of what his experiments proved, even though the data he published with his conclusion showed his conclusion wrong. (The experiments were measurements of the size of human skulls.) In this case the desired conclusion was claimed, even though the evidence did not support it. 2

Well, this accounts for a few of the so-called "missing links" or cavemen—but what about others? Well, there are not that many others. An evolutionist has said that all such fossils would fit into an ordinary coffin.

In short, it seems that many of the "cave man" fossils can be accounted for as being one of the following:

In conclusion, let's look at a statement by an evolutionist. An evolutionist once asked another evolutionist, who was the co-founder of punctuated equilibrium theory (a theory attempting to explain aspects of evolution), if he could name even a single example of a species, whether in the lab or in the fossil record, that he could document that had arisen from another species. He could not name any human, hominid, or ape-like species! 3 ,4

We can therefore put to rest the arguments that the so-called "missing links" have scientifically proven that man has evolved. When closely examined, the evidence does not prove evolution of man from "cave-men".