Often, each separate part of the entire system is useless, or even worse than useless - detrimental - by itself. Alone, these parts of the system would not have any survival value, and thus no reason for Natural Selection (evolution) to select them. They have value only in conjunction with all the other pieces of the system.

A classic example of this type of system is a mouse trap. Biochemist Michael Behe used this example to illustrate irreducible complexity. The trap simply does not work at all unless all parts are present and functioning properly. 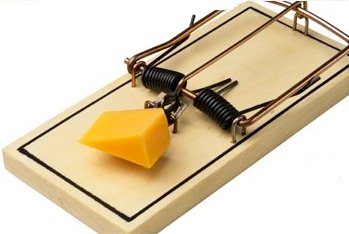 The gradual change implied by evolution would mean the pieces of the system would at first be incompletely, or partially present, and not perfectly or fully functioning. Remember, evolution is not revolution. It is gradual change. Instead of all the parts appearing full-blown overnight, they gradually develop. The problem is that partially developed pieces of such a system would have no survival value, and thus would not be selected by evolution. It is only after they have fully developed and after they are all present that they have value. Then they would be selectable. But the problem is that they would have to be selected before this happened, so evolution could bring the system up to this point of development. But this development needs to happen before there would be reason for selection to occur! We have to have the development before the selection and the selection before the development - a logical difficulty, to say the least.

Concerning evolution, Pierre Grasse has said, "Evolution is revealed only through fossil forms." In other words, Grasse says the fossil evidence is the crux of the argument on which evolution depends. The fossil record is known for not supporting evolution. This is where we hear claims and counterclaims. Some say that the fossils demonstrate evolution. Examples pointed to in support of evolution have included the Archaeopteryx and other birds. Archaeopteryx has been claimed to be transitional between birds and reptiles because, among other things, it has been shown to possess claws, but so do other birds, namely ostriches. To make a long story short, the case concerning Archaeopteryx is not conclusive in support of evolution. It is apparently a fully-fledged bird - it has feathers.

I mentioned the lack of fossils between bird and reptile. In many cases, what we find in the fossil record is lots of one kind of fossil, and lots of another kind, but no fossils of any animals between the two kinds. If evolution occurred, then there should have been many "in-between" fossils.

In fact, one evolutionist pointed out that the best case for documented evidence of one species evolving into another was a species that became infected with a parasite (the species with the infection was the "new" species, different from the same species without the parasite). If we had lots of transitional fossils, he would have mentioned that instead.

The case of the missing "in-between" fossils is a big problem. The so-called "Cambrian explosion" is the "sudden appearance" of many different kinds of fossils. The problem is that the fossils of the kinds leading up to and gradually changing into the Cambrian species are missing. Dr. Ariel Roth, former chairman of the department of Biology at Loma Linda University states, "The Cambrian explosion is not just a case of all the major animal phyla appearing at about the same place in the geologic column. It is also a situation of no ancestors to suggest how they might have evolved." 1

Although it has been argued that birds evolved from dinosaurs, it has also been argued that things went the opposite direction, that dinosaurs might have evolved  from birds. If both can be argued, it would seem that the evidence in support of both is not very conclusive or decisive. Again, we see that apparently the fossil record is not supportive of evolution.

In case after case, with the whale and the horse, for example, we find that the fossil evidence does not really support evolution.

If we look at the theoretical methods by which evolution may be accomplished, we see problems there also. Irreducible complexity has already been mentioned. The  changes in genes necessary for new species have been attributed to mutations. But according to Nicholas Comninellis, president of the Institute for International Medicine, "...almost all mutations are harmful to animals." 2  And from Maxim D. Frank-Kamenetski, Professor of the Center for Advanced Biotechnology and Biomedical Engineering at Brown University, "Mutations are rare phenomena, and a simultaneous change of even two amino acid residues in one protein is totally unlikely. ...One could think, for instance, that by constantly changing amino acids one by one, it will eventually be possible to change the entire sequence substantially.... These minor changes, however, are bound to eventually result in a situation in which the enzyme has ceased to perform its previous function but has not yet begun its 'new duties'. It is at this point it will be destroyed, along with the organism carrying it." 3

One way to avoid the problem is for all the necessary mutations to occur together at the same time. However, the probability of this happening is extremely small. Estimates of the probability of the formation of even some small parts of what is necessary for even a single cell to develop have been made. The numbers calculated have included such estimates as 1 chance in 10 to the thousandth power. The significance of this is that 10 to the hundredth power - a much smaller number than 10 to the thousandth power - is still far greater than the estimated number of atoms in the universe. Think of it - there is a higher chance of picking a single atom out of the entire known universe than the chance that even some of the things that evolution requires would have actually happened.

Why would we believe that these things happened, along with many others necessary for evolution to have occurred? We may give various reasons for believing in evolution, but in this case, we apparently cannot honestly say, "Because of the evidence."