Basaltic columns have been a mystery, not just for their appearance of being ancient manmade structures, but for the little known factors involved in their natural formation.

In this regard, from my December 2006 trip to Ecuador, 1 the basalt columns at the base of the Tungurahua Volcano (Figs. 1, 2), are not well known. I found no research regarding the formation of these columns in Tungurahua, but a student’s thesis regarding avalanches that supposedly happened about 3000 and 30,000 years ago (based on Ar-Ar radiometric dating) includes these basaltic columns or igneous columnar jointing. 2 Currently the Tungurahua Volcano is active and from time to time hits the news worldwide concerning its devastating effects in the region, 3 but the presence of basaltic columns at an elevation of over 5,023 m (16,480 ft)   above sea level is intriguing and probably the result of the global flood recorded in Genesis taking place about 4400 years ago. 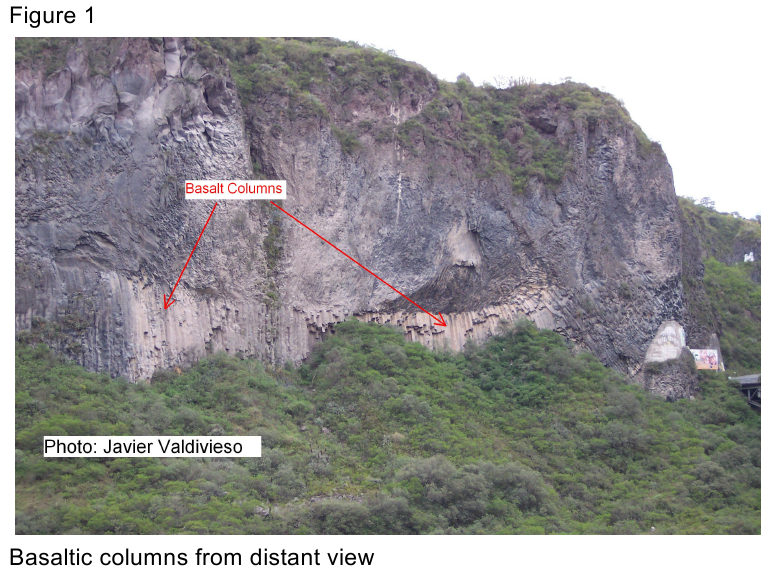 Two famous locations of basaltic columns are Devils Tower in Wyoming or the Giant's Causeway in Ireland (Figs. 3, 4)

Creation Magazine has an article regarding the origin of these geologic curiosities which describes the sequence of its formation from a young Earth creationist perspective: 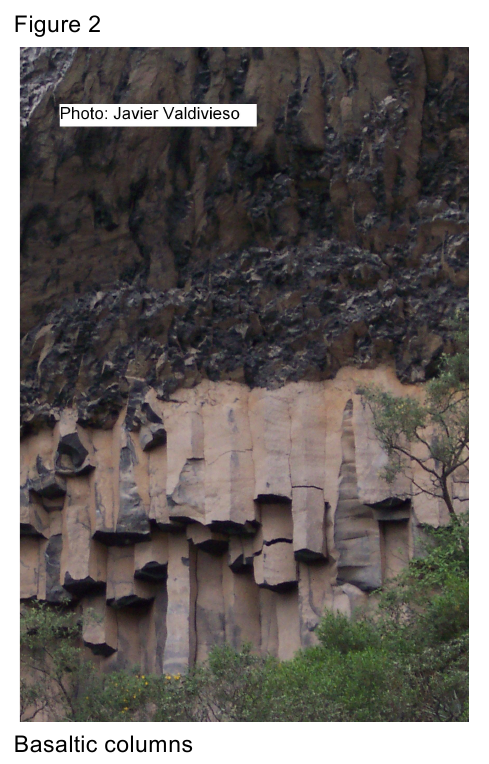 Evidence of water is another indication that Giant's Causeway formed during Noah's Flood. Water left telltale signs all over the lava flows:

• Molten rock flowing over the flooded land generated lots of steam. It bubbled up through the bottom of the lava leaving long, vertical tubes.

• At the top and bottom, water quenched and shattered the lava on contact, leaving broken rock.

• Rapid cooling of the lava under water produced ‘pillow lavas'. They squeezed out like a tongue of toothpaste and have a glassy skin. Frequently, the hot water chemically changed the basaltic glass into a soft, yellow-brown material called palagonite.

• Soon after each lava flow was emplaced, the dis- placed floodwaters returned, flooding over the top of the basalt. The water circulated down into the cracks, which quickly penetrated deeper inside the lava. This produced the distinctive twisted columns at the top of the lava flows called the entablature. 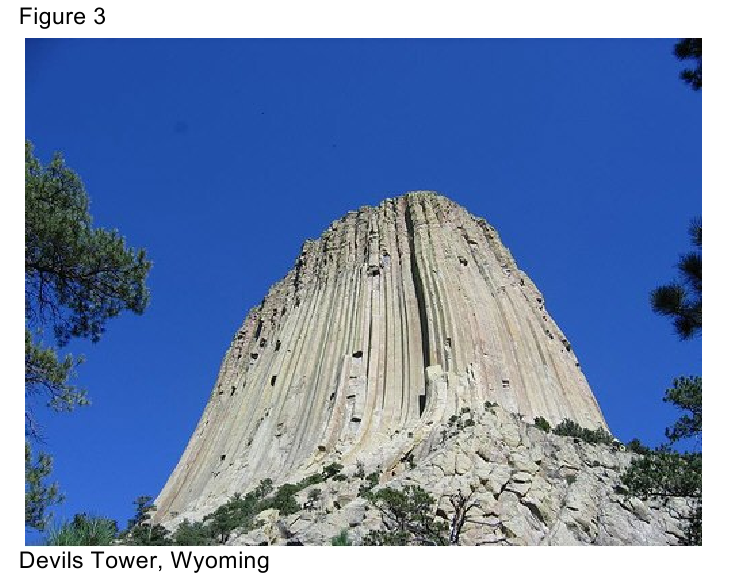 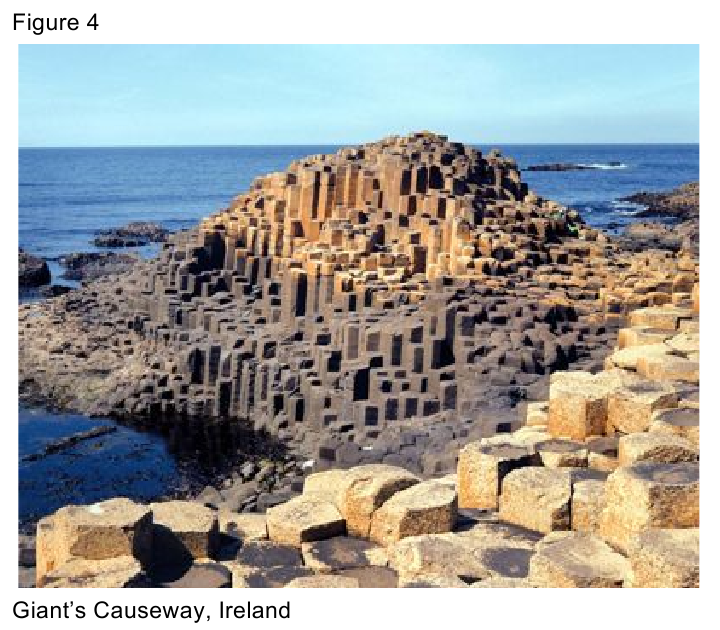 • The successive lava flows occurred so quickly that they preserved the glassy top of the underlying lava surfaces.

Even though the lavas flowed into abundant water, the eruption was so large and rapid that the lavas were able to flow for huge distances. The effects of lava-water interaction are particularly evident at the surfaces and edges of the lava flows." 4

The mechanism of formation of basaltic columns worldwide has only a hypothetical basis; their formation has not been directly observed. Many articles abound which state that the speed of cooling is a factor in their formation. The volcano (Tungurahua III) was built on the edifice of Tungurahua II. The petrography and geochemistry of its rocks are as follows:

The petrography of the DAD-30 ka AP and DAD-3 ka AP is characterized by a similar mineral association, characterized by the occurrence of plagioclase + clinopyroxene + orthopyroxene + Fe-Ti oxides; hornblende and olivine as accessories minerals respectively. Geochemically these rocks constitute a medium-K calc-alkaline series, whose silica content varies from basic andesites to dacites. Globally, the rocks of both avalanche deposits show a strong affinity with 2 rocks of Tungurahua II edifice. 2

Adesite and dacites are igneous basalt rocks, which are the basic constituents of the basalt columns. It is notable that research articles published 15-25 years ago contend that long periods of time are required for basalt column formation. Those articles do not specifically include water as an agent for cooling, but they infer some general idea of either slow or fast cooling. More recent articles on the same topic mention water (either from an Ice Age era or from catastrophic sources) as the most likely agent for cooling the basalt lava beds, allowing the thermodynamics, heat exchange, and crystal formation that are typical of basalt columns.

Extrapolated experiments have been made which include those by Gerhard Müller. His work abstract is as follows:

Basalt columns can be simulated by the desiccation of mixtures of starch and water. This note presents photos of starch columns from laboratory experiments and summarizes results of an extended study (Müller, G., 1998. Starch columns: analog model for basalt columns. J. Geophysics. Res. 103, 15239-15253) [Fig. 5]. Basalt cooling and starch desiccation are diffusion processes causing contraction and cracks. Column-related crack patterns in basalt and starch are largely similar. Differences in their spatial and time scales are due to the difference in the diffusion constants which are about two orders of magnitude. Starch experiments give a few new insights into basalt-column formation. 5

Basalt columns form as sort of desiccation cracks pretty much like drying mud cracks. The main difference is the temperature: basalt is cooling down quite rapidly and by doing so it starts shrinking. Of course this shrinking process starts at the surface, which is either air or more likely another cool rock. And from that contact the shrinking process slowly develops into the depth forming longer and longer columns. 6

Based on these experimental works, Lucas Goehring and Stephen W. Morris affirm in their last study that "the role of water in removing heat from the interior of the flow (of lava) is crucial to understanding the formation of columnar joints." 7 Also they affirm:

Our results strongly suggest that there must exist an efficient means of extracting heat through the cracks of the lower colonnade, at least in the well-ordered types of colonnades7 that we studied. 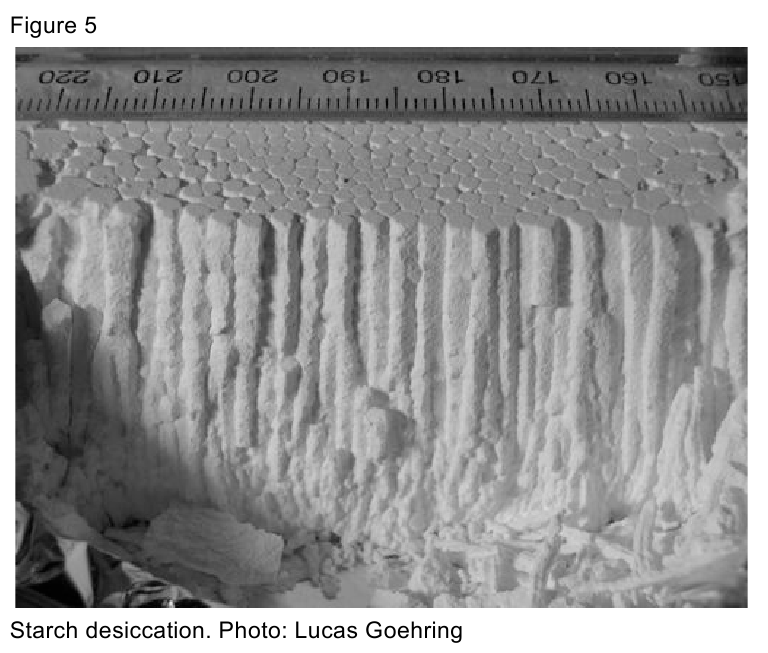 I would like to reaffirm these statements that water was the element to cool a massive basaltic lava bed that was miles in extension and hundreds of feet deep. Furthermore Goehring and Morris state:

It is thought that in these thicker flows the percolation of wa- ter through joints has influenced their cooling...during the last ice age. The scablands of the Columbia Plateau (where they focus their studies) were created through a series of 7 catastrophic flows...

Figure 6 show the remaining salts attached to the sides of the columns. 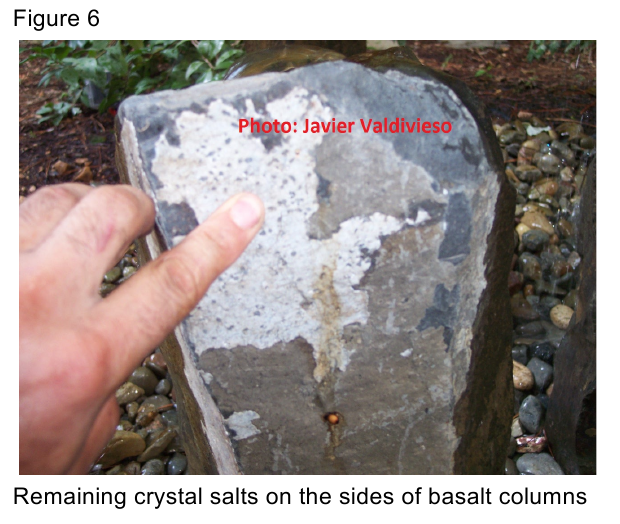 In regard to the Müller's experiment, Goehring and Morris affirm:

...the pattern that develops in desiccated starch has been shown to be statistically similar to that of the Giant's Causeway but does not evolve to a perfect hexagonal arrangement. Instead, there appears to be a well-defined amount of disorder inherent in the ‘mature' columnar pattern."8

From my own field research, I would like to introduce in this article this amazing sample of miniature columnar joints (Fig. 7). This needs further study. The crystal shapes are polygonal and show curved features, striae, and other elements present in basalt columns. Desiccated starch models do not show these elements (Fig. 8).

Basaltic columns or columnar joints are of massive size and depth. The experimental models using desiccated starch are useful in interpreting the mechanism of formation of basalt columns. The formation of basalt columns and the sample found in Ecuador of miniature columnar joints suggest a better model for further study. From my creation perspective, this model could include the consideration of how the worldwide flood, as recorded in Genesis, may have been involved in basaltic column formation. 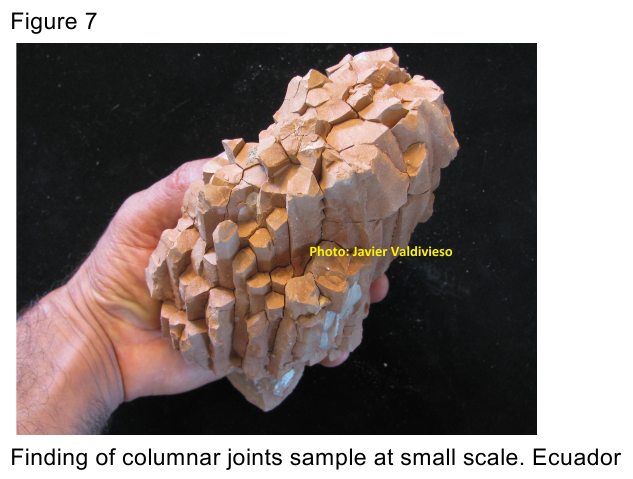 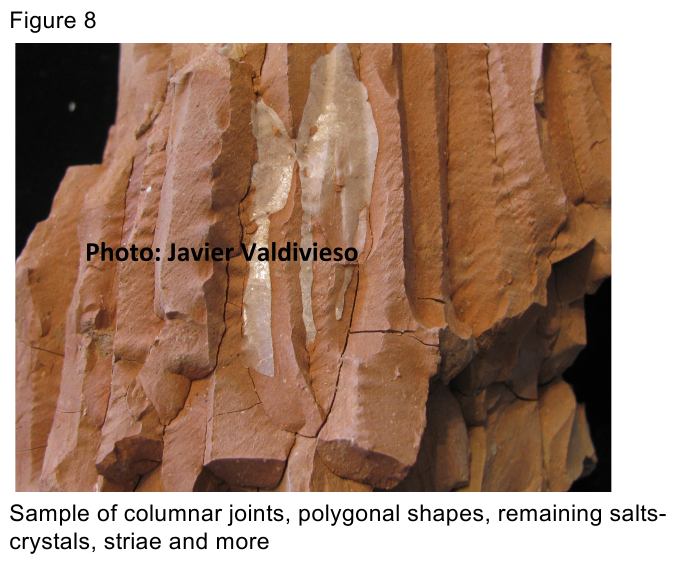 In regards to the basaltic columns of the Tungurahua Volcano, they are estimated to being formed 3000 and 30,000 years ago, depending on inspection and dating of the related avalanches. This places a limitation on the timeframe of their formation. The Ice Age did not reach the equator and, thus, could not supply massive sources of water needed for the cooling of the basaltic lavas for the Tungurahua location. The current location 16,480 ft altitude was not necessarily the location at the time of its formation. The Creationist Model considers tectonic plates and continental drift at the time of the Deluge. Based on my observations and research as a creationist, I propose that the basalt columns are among the most impressive features of the world-wide flood recorded in Genesis that took place about 4400 years ago. Their formation was shaped by massive amounts of water to cool colossal basalt lava beds worldwide.