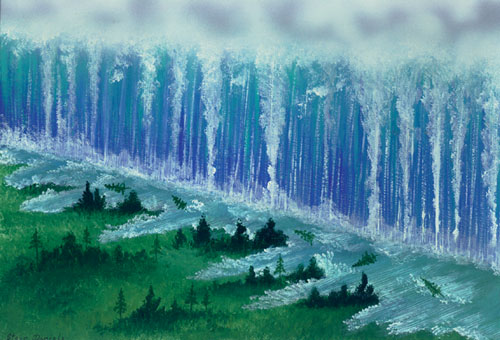 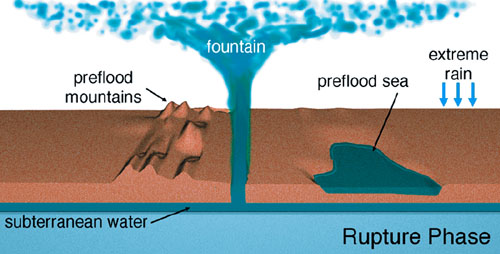 About the author: Walt Brown received a Ph.D. in mechanical engineering from the Massachusetts Institute of Technology, where he was a National Science Foundation Fellow. He has taught college courses in physics, mathematics, and computer science. Brown is a retired Air Force full colonel, West Point graduate, and former Army Ranger and paratrooper. Assignments during his 21 years of military service included: Director of Benét Laboratories (a major research, development, and engineering facility); tenured associate professor at the U.S. Air Force Academy; and Chief of Science and Technology Studies at the Air War College. For much of his life Walt Brown was an evolutionist, but after years of study, he became convinced of the scientific validity of creation and a global flood. Since retiring from the military, Dr. Brown has been the Director of the Center for Scientific Creation and has worked full time in research, writing, and teaching on creation and the flood.

We can see on our planet 17 very strange features which can now be systematically explained as a result of a cataclysmic global flood who's water erupted from subterranean chambers with an energy release exceeding the explosion of ten billion hydrogen bombs.

This explanation shows us just how rapidly major mountains formed. It explains the coal and oil deposits, the rapid continental drift, why on the ocean floor there are huge trenches and hundreds of canyons and volcanoes. It explains the formation of the layers strata and most of the fossils; of the frozen mammoths, the so-called ice ages and major land canyons, especially the grand canyon. The pre-flood earth probably had only one very large super-continent covered with lush vegetation. There were seas and major rivers. The mountains were smaller than today's, but perhaps 9000 feet high.

According to the hydro plate theory, the pre-flood earth had a lot of subterranean water; about half of what is now in our oceans. This water was contained in interconnected chambers forming a thin spherical shell about half a mile thick perhaps 10 miles below the earth's surface. 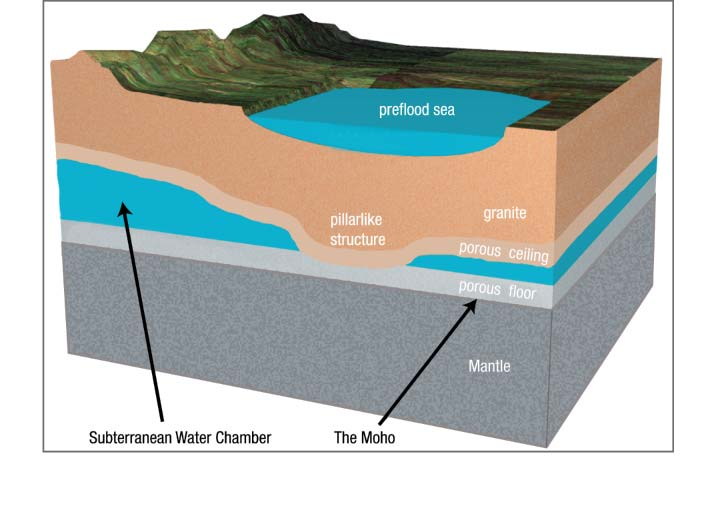 Increasing pressure in the subterranean water stretch the crust, just as the balloon stretches when the pressure inside increases.

Failure in the crust began with a microscopic crack which grew in both directions at about 3 miles per second. The crack, following the path of least resistance, encircled the globe in about two hours.

As the crack raced around the earth, the overlaying rock crust opened up like a rip in a tightly stretched cloth. The subterranean water was under extreme pressure because the weight of the 10 miles of rock pressing down on it.

So the water exploded violently out of the rupture. All along this globe encircling rupture fountains of water jetted supersonically almost 20 miles into the atmosphere. The spray from this enormous fountain produced torrential rains such as the earth has ever experienced, before or after.

Some of the water, jetting high above the cold stratosphere, froze into super-cooled ice crystals and produced some massive ice dumps; burring, suffocating and instantly freezing many animals, including the frozen mammoths of Siberia and Alaska.

The high pressure fountains eroded the rock on both sides of the crack producing huge volumes of sediments that settled out of this muddy water all over the earth. These sediments trapped and buried plants and animals forming the fossil record.

This erosion widened the rupture. Eventually the width was so great that the compressed rock, beneath the subterranean chamber, sprung upward; giving birth to the mid-oceanic ridge that raps the earth like the seam of a baseball. 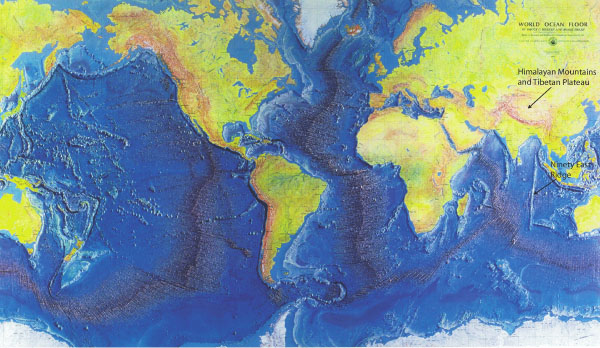 The continental plates, the hydro plates, still with lubricating water beneath them, slid downhill away from the rising mid-Atlantic ridge.

After the massive, slowly accelerating continental plates reached speeds of about 45 miles per hour, they ran into resistance, compressed and buckled. The portions of the hydro plate that bucked down formed ocean trenches. Those that buckled upward formed mountains. This is why the major mountain chains are parallel to the oceanic ridges from which they slid.

The hydro plates, in sliding away from the oceanic ridges, opened up very deep ocean basins into which the flood waters retreated. On the continents each bowl shaped depression, or basin, was naturally left brim full of water; producing many post-flood lakes.

The trench region of the western Pacific lies near the center of the combined Pacific and Indian Oceans. As material beneath the western Pacific subsided, it sheared and buckled downward in some places, forming trenches. The Atlantic Ocean (centered at 21.5°W longitude and 10°S latitude) is almost exactly opposite this trench region (centered at 159°E longitude and 10°N latitude). 1