For another view, see https://tasc-creationscience.org/article/archaeopteryx-not-missing-link; both views, however, concur that archaeopteryx did not evolve and does not prove evolution occurred.

The following article is reprinted from the Center for Scientific Creation, www.creationscience.com/onlinebook/FAQ117.html#wp1365100. It comes from the Frequently Asked Questions part of the book, In the Beginning: Compelling Evidence for Creation and the Flood, by Dr. Walter T. Brown. 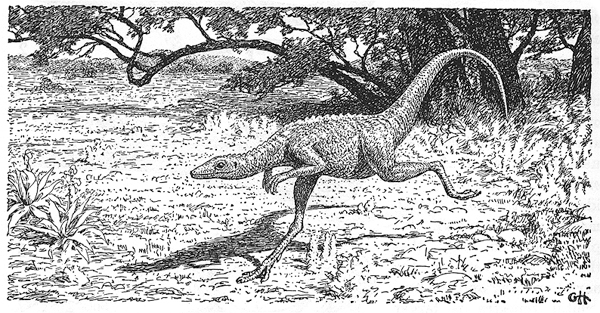 Archaeopteryx means ancient (archae) wing (pteryx). But the story behind this alleged half-dinosaur, half-bird is much more interesting than its fancy, scientific-sounding name or the details of its bones. If Archaeopteryx were shown to be a fraud, the result would be devastating for the evolution theory.

Since the early 1980s, several prominent scientists have charged that the two Archaeopteryx fossils with clearly visible feathers are forgeries. 2

Allegedly, thin layers of cement were spread on the mating surfaces (slab and counterslab) of two fossils of a chicken-size dinosaur, called Compsognathus (komp-sog-NAY-thus). Bird feathers were then imprinted into the wet cement.

If Archaeopteryx did not have a few perfectly formed, modern feathers (clearly visible on two of the seven known specimens 3 ), it would be considered Compsognathus. 4  The skeletal features of Archaeopteryx are not suitable for flight, because no specimen shows a sternum (breast bone), which all birds and bats must have to anchor their large flight muscles. Why would Archaeopteryx have modern, aerodynamically perfect feathers if it could not fly? Finally, after 150 years of filling textbooks and training teachers with false information, two prestigious science journals announced that Archaeopteryx should not be classified as a bird. 5 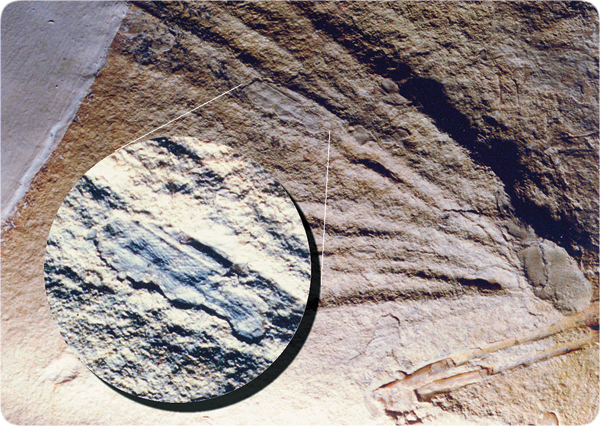 Figure 214 - “Chewing Gum Blob.” These raised spots have the appearance of pieces of chewing gum. They have no corresponding indentation on the mating face of the fossil. Possibly some small drops of wet cement fell on the surface and were never detected or cleaned off by the forger.

The two fossils with feathers were “found” and sold for high prices by Karl Häberlein (in 1861 for 700 pounds) and his son, Ernst (in 1877 for 20,000 gold marks), just as Darwin’s theory and book, The Origin of Species (1859), were gaining popularity. While some German experts thought that the new (1861) fossil was a forgery, the British Museum (Natural History) bought it sight unseen. (In the preceding century, fossil forgeries from limestone quarries were common in that region of Germany. 6 )

Evidence of an Archaeopteryx forgery includes instances where the slab and counterslab do not mate. The feather impressions are primarily on the main slab, while the counterslab in several places has raised areas with no corresponding indentation on the main slab. These raised areas, nicknamed “chewing gum blobs,” are made of the same fine-grained material that is found only under the feather impressions. The rest of the fossil is composed of a coarse-grained limestone.  [See Figure 214.]

Some might claim that Archaeopteryx has a wishbone, or furcula—a unique feature of birds. It would be more accurate to say that only the British Museum specimen has a visible, but strange, furcula—“relatively the largest known in any bird.” 7  Furthermore, it is upside down, a point acknowledged by two giants of the evolutionist movement—T. H. Huxley (Darwin’s so-called bulldog) and Gavin deBeer. As Fred Hoyle and N. Chandra Wickramasinghe stated,

It was somewhat unwise for the forgers to endow Compsognathus with a furcula, because a cavity had to be cut in the counterslab, with at least some semblance to providing a fit to the added bone. This would have to be done crudely with a chisel, which could not produce a degree of smoothness in cutting the rock similar to a true sedimentation cavity. 8   [See Figure 215.] 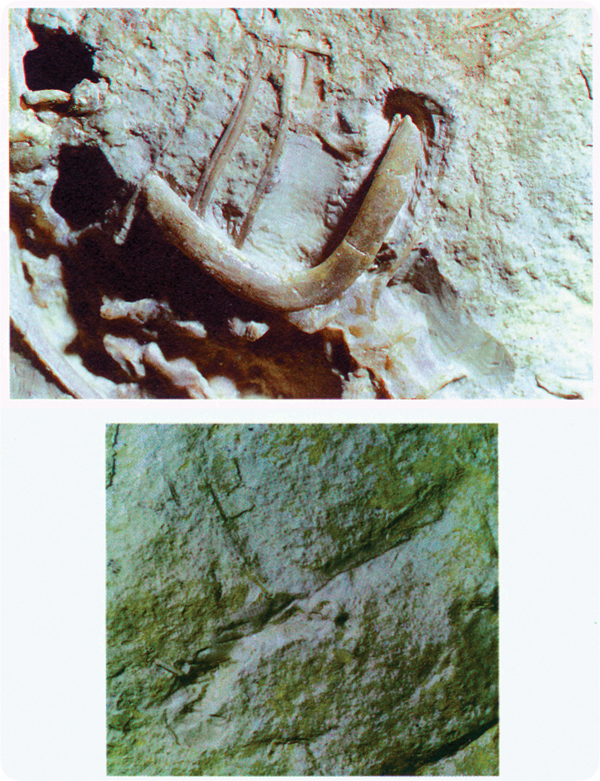 Figure 215 - Furcula of Archaeopteryx? This V-shaped bone is claimed to be the wishbone, or furcula, of Archaeopteryx. It is shaped more like a boomerang than the familiar wishbone in a chicken. A furcula acts as a spring—storing and releasing energy with each up and down wing flap. Notice the crack in the right arm of the furcula and the broken right tip—strange for a bird’s flexible bone buried in soft sediments. Perhaps it broke when a forger chipped it out of another fossil. One must ask why only this Berlin specimen shows a clear furcula. Notice how the counterslab (bottom picture) does not have a correspondingly smooth depression into which the raised furcula will fit.

Feather imprints show what have been called “double strike” impressions. Evidently, feather impressions were made twice in a slightly displaced position as the slab and counterslab were pressed together.  [See Figure 216.] 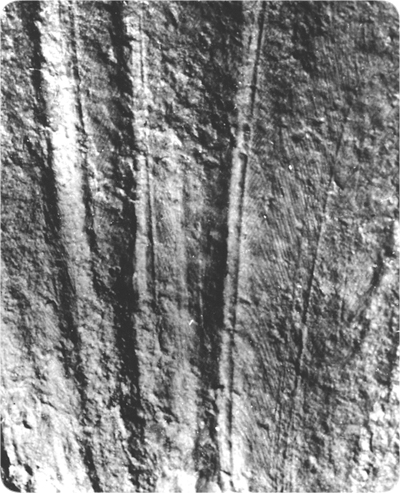 Figure 216 - Double Strike. A forger would have a delicate task positioning the counterslab on top of the slab with a cement paste between the two slabs. The two halves of the fossil must mate perfectly. A last-minute adjustment or slip would create a double strike.

Is Archaeopteryx a forgery? Honest disagreements were possible until 1986, when a definitive test was performed. An x-ray resonance spectrograph of the British Museum fossil showed that the finer-grained material containing the feather impressions differed significantly from the rest of the coarser-grained fossil slab. The chemistry of this “amorphous paste” also differed from the crystalline rock in the famous fossil quarry in Bavaria, Germany, where Archaeopteryx supposedly was found. 9  Few responses have been made to this latest, and probably conclusive, evidence. 10

Fossilized feathers from any animal are almost unknown, 11  and several complete, flat feathers that just happened to be at the slab/counterslab interface are even more remarkable. If a feathered Archaeopteryx had been buried in mud or a limestone paste, its feathers would have had a three-dimensional shape, typical of the curved feathers we have all held. Indeed, the only way to flatten a feather is to press it between two flat slabs.  Flattened feathers, alone, raise suspicions.

Also, there has been no convincing explanation for how to fossilize (actually encase) a bird in the 80% pure, Solnhofen limestone. One difficulty, which will be appreciated after reading about liquefaction on pages 187–199, is the low density of bird carcasses. Another is that limestone is primarily precipitated from seawater, as explained on pages 245–250. Therefore, to be buried in limestone, the animal must lie on the seafloor—unusual for a dead bird. Other problems with evolving birds are described in Endnote i on page 68.

While not addressing charges that Archaeopteryx status as a bird was based on faked evidence (that fooled the evolutionist community, textbook writers, and students for 150 years), leading paleontologists are coming to the conclusion that Archaeopteryx is a dinosaur. “It isn’t a bird after all.” 12  This is based on other fossils found that are definitely two-legged dinosaurs (similar to those seen in the film Jurassic Park). These fossils have too many characteristics in common with Archaeopteryx. 13  Lawrence Witmer, a paleontologist at Ohio University put it this way: “We now really need to accept the fact that Archaeopteryx probably isn’t a bird.” 14

When the media popularize an evolutionist claim that is later shown to be false, retractions are seldom made. One refreshing exception is provided by National Geographic, which originally, and incorrectly, reported the discovery in China of “a true missing link in the complex chain that connects dinosaurs to birds.” (Actually, the fossil was a composite of a bird’s body and a dinosaur’s tail, faked for financial gain.) 15  Details were explained on a few back pages of National Geographic by an independent investigator at the request of National Geographic’s editor. The report stated:

Such fiascoes are common among those seeking rewards and prestige for finding fossils of missing links. Fake fossils, especially from China, 17  have propped up evolutionary stories for decades. The media and museums that popularize these stories mislead the public.

Archaeopteryx’s fame seems assured, not as a transitional fossil between dinosaurs (or reptiles) and birds, but as a forgery. Unlike the Piltdown hoax, which fooled leading scientists for more than 40 years, the Archaeopteryx hoax has lasted for 150 years. [See"Ape-Men?" on page 14.] Because the apparent motive for the Archaeopteryx deception was money, Archaeopteryx should be labeled as a fraud. The British Museum (Natural History) gave life to both deceptions and must assume much of the blame. Those scientists who were too willing to fit Archaeopteryx into their evolutionary framework also helped spread the deception. Piltdown man may soon be replaced as the most famous hoax in all of science. 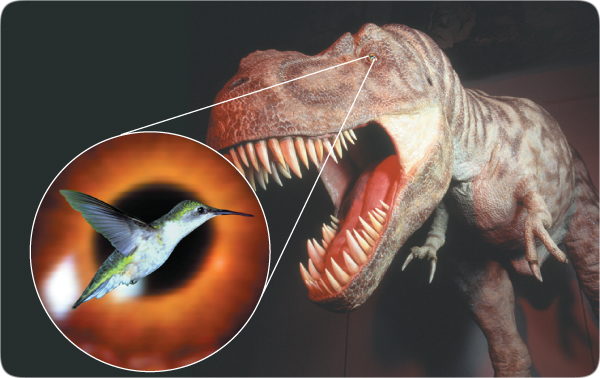 Figure 217 - Birds from Dinosaurs? Birds have many marvelous and unique features: flight, feathers, energy efficiency, navigational abilities, brittle eggs, amazing eyesight, and lightweight construction. If birds evolved, from where did they come? Evolutionists try to solve this recognized dilemma 18  by claiming that birds evolved from dinosaurs 19  or that they are “cousins.” Archaeopteryx is a prime exhibit for both views. Yes, dinosaurs have some features in common with birds, especially aspects of their bone structure, but birds have many characteristics that dinosaurs do not have. No doubt, more will be discovered.

Another possibility is that a designer gave both birds and dinosaurs some common features, because each had similar needs. For example, gears are common to cars, bicycles, windmills, and watches. Everyone knows they were designed. No one teaches, advocates, or even considers that windmills turned into cars or watches. Efficiency dictates design similarities. How could anyone think dinosaurs evolved into hummingbirds? Time, mutations, and natural selection?