Why have many of us forgotten that God has made us humans, and of one race, the human race? I propose additionally to the above statement that we have been indoctrinated under the cloak of science by the Darwinian, naturalistic evolutionary theory, taught largely as fact to us and our children, which would have us believe that we humans evolved from an "ape-like" creature over several million years and that we are not created specially by God in the image of God as revealed in the Bible. (Genesis 1-26). (Note: As believers in God and as creation scientists, we can be encouraged by the recent news that the Ohio State School Board voted on Tuesday, March 9, 2004, to allow a lesson plan in its public schools that includes intelligent design theory along with scientific analysis of the evolutionary theory. The vote was applauded by the Seattle-based Discovery Institute, which supports scientists studying intelligent design theory, and says states should teach both evolution and scientific criticism of evolutionary theory. Yahoo! News. U. S. National - AP. Th., Mar. 11, 2004.)

Charles Darwin's book, The Origin of Species, in 1859 helped to establish the theory of evolution. If we examine the subtitle of this book, ...The Preservation of Favoured Races in the Struggle for Life, we can see the implication of racism and "survival of the fittest". Henry M. Morris, Ph.D., founder of the Institute for Creation Research, points out in his booklet, The Bible, Science, and Creation, 2  that "...evolution is the alleged rationale for many of the evil and harmful practices that have become rampant in the 20th century. Racism is an obvious example..." In Darwin's later book, The Descent of Man, Darwin argued that natural selection would eventually eliminate what he called "the savage races" in favor of "the civilized races of men." Not only Darwin but also Thomas Huxley, Herbert Spencer, and practically all evolutionary scientists and sociologists of the post-Darwin century were racists. This situation prevailed until World War II, when Adolf Hitler and his genocidal policies finally gave racism a bad name among intellectuals. Hitler himself was an ardent evolutionary pantheist, deeply involved in both occultism and imperialistic social Darwinism. 3 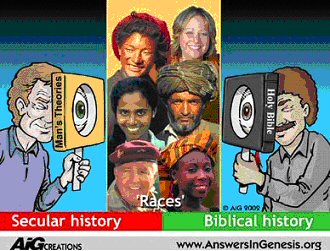 Hitler's evolutionary thinking and racist views undoubtedly influenced him to try to eradicate the Jews and to set up a human breeding farm to develop a superior human race. After World War II, tracking of descendants of that breeding experiment showed that offspring did not come out superior but fell into a usual assortment of human characteristics that included regular struggles with disease and eventual death, as we creation scientists understand came from the penalty of the original sin of disobedience and the fall of man as recorded in Genesis, chapter 3. 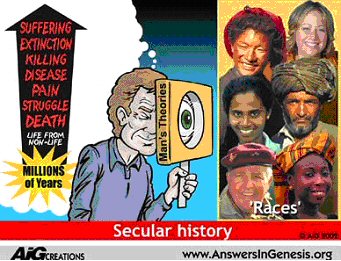 For a better understanding of how the "races", or more appropriately stated, "people groups", or "varieties of humans" came about, let's examine this issue further from the Biblical account and scientific evidences that support the Biblical account. We find from the first book of the Bible, Genesis, that God created man on the sixth day of creation with dominion over the other animals and in His own image; male and female created he them (Genesis 1: 26-27). The primeval mandate of dominion by man is most appropriately called the Dominion Mandate. It clearly specifies that man (Adam and his descendants) is to have full dominion (under God, of course) of the entire earth and its creatures. No details are given as to how this dominion was to be exercised, but it certainly was intended as a stewardship, not a despotism. 4 In Genesis 1: 28, God blesses them and further mandates to them to be fruitful, and multiply, and replenish the earth, and subdue it. In Genesis, chapter 2, we find that Adam and Eve were the first man and woman, are the ancestors of mankind, and therefore would contain the foundation of information in their genetic make-up to provide the variety for all future generations of humans. (And regarding skin color, which will be discussed later, Adam and Eve would hold in their genetic make-up genes for varying degrees of production of melanin, which determines skin color; and most likely they were a brown color, not the white color so often depicted in books and films that have promoted racist attitudes towards people of darker skin or whiter skin.)

As we read and study further from Genesis, chapter 3, we find that Adam and Eve had sons and daughters and their descendants had sons and daughters until the time of the worldwide Noahic flood in Genesis, chapter 7. After the flood, we note in chapter 10 that Noah and his three sons (Japheth, Ham, and Shem) and their wives would then carry on the mandates outlined above and provide the genetic variety in humans inherited from Adam and Eve. Genesis 10: 32 tells us, "These are the families of the sons of Noah, after their generations, in their nations and by these were the nations divided in the earth after the flood." Please grasp the point that we are all of "one blood" and come from the same line from first Adam and Eve and their preserved foundation of genetic information carried forward into all the world by Noah's family and the continuing mandate to replenish the earth.

Genesis, chapter 11, records mankind's dispersal after Babel and the confusion of the languages due to further rebellion and wickedness by man with their intention not to follow the "replenish and subdue the earth" mandate. Now, mankind would scatter according to God's mandate. Briefly, genealogists and historians that have studied the dispersal from Babel link Japheth with Europe and India, Ham with Phoenicia, Sumeria, Egypt, Ethiopia, Southern Arabia, China, and Shem with Israel and the Arabic countries. 5 You may wish to read the book, God and the Nations by Dr. Henry M. Morris, noted theologian and scientist, to learn more about the dispersal of mankind from Babel. You may call the Institute for Creation Research (ICR) at 800-628-7640 to order or come out to our TASC meetings and purchase a copy. 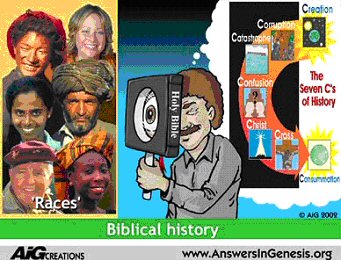 Let us look at some of the genetic and scientific relationships that we can understand from the background of Genesis, chapter 11. Scientifically, from breeding knowledge of humans, all peoples, preferably called "people groups" instead of "races", can freely interbreed and produce fertile offspring. 6 Distance, language, and cultural difference have sometimes prevented this, but we only have to look at rapid transportation means and the melting pot of America today to see this happening to blend our genetic information back to a more similar variety of that of Adam and Eve and Noah's family before the dispersal. We find, scientifically, that the biological differences between people groups are not very great at all. In fact, we are biologically the same species and while people groups' genetic make-up provides for genotypic and phenotypic variety, the total DNA foundation differences are trivial. 7 The most noticeable difference is in skin color, but the fact is, we are all of the same color; some people just have more of that color than others based on the amount of melanin produced by their genetic variety. The predominant shade for a well-mixed group would be brown, 8 probably more similar to our original parents, Adam and Eve and then Noah's family. The fact is, most of the world's population is still mid-brown. 9 For an understanding of development of other traits among people groups you may wish to read some of the references provided in this article, and to acquire, refer to the above purchasing number for ICR.

In summary, the dispersion at Babel broke up a large interbreeding group into small, inbreeding groups. This ensured that the resultant groups would have different mixes of genes for various physical features. By itself, this dispersion would ensure, in a short time, that there would be certain fixed differences in some of these groups, commonly called "races", now preferably called "people groups". In addition, the selection pressure of the environment would modify the existing combinations of genes so that the physical characteristics of each group would tend to suit their environment. 10

There has been no simple-to-complex evolution of any genes, for the genes were present already. The dominant features of the various people groups result from different combinations of previously existing created genes, plus some minor degenerative changes, resulting from mutation (accidental changes which can be inherited). The originally created (genetic) information has been either reshuffled or has degenerated, but has not been added to. 10

Remember, the whole concept of race is evolutionary, not Biblical. 11  I end with some thoughts of Zig Ziglar in his foreword to the book, One Blood: The Biblical Answer to Racism. "Racism is morally, socially, scientifically, and Biblically wrong. It is an ugly blot on our society. When we look at the ugliness of racism and the impact of evolution, we realize there is a solution to the problem of racism—and that is Biblical principles and scientific facts. In God's eyes, all of us are equally loved and equally important. Christ shed His blood to cover the sins of all of us." 12

Regarding racism, which will you choose, "races" or "one blood"?