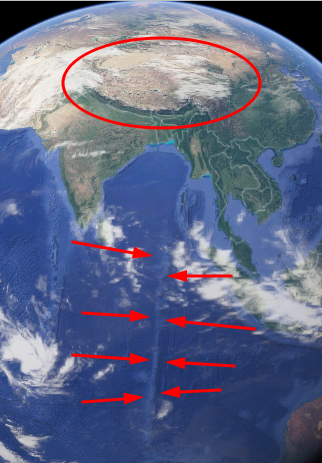 Fig. 1 - 90 East Ridge indicated by arrows; the Himalayas are circled. 1

We will explore these questions in this article.

Another clue is the North-South orientation of the ridge.

"... [A] hotspot in the mantle beneath the Indo-Australian Plate created the ridge as the plate has moved northward..." 4

Hotspots are explained by plumes of magma rising from the mantle (the large portion of the earth that lies beneath the crust and the central core) or from shallower depths. 5

There are two hypotheses that attempt to explain their origins. One suggests that hotspots are due to mantle plumes that rise as thermal diapirs from the core–mantle boundary. The other hypothesis is that lithospheric extension permits thepassive rising of melt from shallow depths. 5

However, there are problems with plumes, 5 as Geophysics Professor Gillian Foulger indicates in his 2010 book Plates vs Plumes: A Geological Controversy:

Since the advent of the mantle plume hypothesis in 1971, scientists have been faced with the problem that its predictions are not confirmed by observation. 6

The model described in this article is that the ridge was caused by a rip in the crust which opened a path for magma to rise and form the ridge. The obvious questions are,

In this model, the crust of the earth near the ridge moved south, differently than the normal spin of the earth on its axis, which moves the earth's surface west-east, not south. Such a rare movement shifted the entire earth's crust, not just the part near this ridge.

To understand this event, let's review some physics. Spinning objects obey certain laws of physics. If there is a concentration of mass spinning about an axis, centrifugal force will "pull" that mass away from the spin axis. You may have felt this "pull" if you ever held a rope with an object attached and spun it around you, such as a cowboy does with a rope at a rodeo. This force increases the faster the mass is spun.

This outward centrifugal force causes a slight bulge at the equator. This bulge is important to note; we will refer to it later.

Orogenesis is the process of mountain forming. The model we are considering in this article holds that mountains were formed by upward buckling. 7 Figure 2 illustrates this. The buckling forming mountain ranges was a result of the flood of Noah in this model. We will not go into why mountains buckled up because of space limitation. The details could fill a book! But for a summary of events leading up to orogenesis, see The Hydroplate Theory and The Great Flood. 8 For more detailed information on the events leading up to orogenesis, you can refer to the book In the Beginning, by Dr. Walt Brown, 9 to Dr. Brown's website, 10,11 and to a series of videos by Bryan Nickel. 12 Another article on this is "90° East Ridge" by David Warren Mathisen. 13

During orogenesis (mountain building) mountains are formed from upward buckling due to compression of the continental plate. This upward buckling resulted in "squeezing" of additional mass into the part of the crust where the mountains formed. 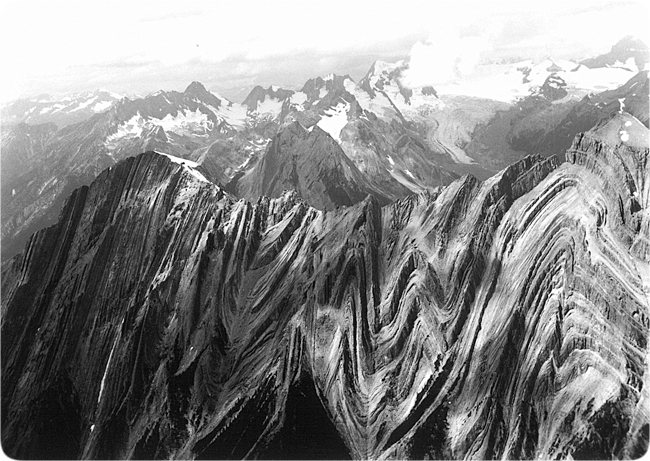 Recall that centrifugal force is directed away from the spin axis. Since the Himalayas were not present before they formed (which should be obvious), the mass concentration was not present before these mountains existed, and the earth's spin was balanced or in equilibrium as any spinning object would be if left alone for a reasonable time. However, after the mountains arose, these most massive and highest mountains exerted the strongest centrifugal effect on the earth which became unbalanced. Thus, centrifugal force was trying to move those mountains outward (from the earth's spin axis) as far as possible.

Please note that other newly formed mountain ranges of the crust would have also been pulled by this same centrifugal force away from the earth's spin axis. The question determing what occurred was which mountain range was being pulled by the strongest force? In this case, the recently-upward-buckled Himalayas, being the largest, would have resulted in the strongest centrifugal force.

Note, this roll would have been in a different direction (more north-south) than the spinning of the earth on its axis (west-east). It would have been a temporary motion, that lasted only until equilibrium among the forces was re-established.

However, during this temporary movement of the Himalayas south toward the equator, there was also another effect.

However, rock does not tend to stretch very easily! It tends to crack instead.

In summary, this theory proposes that the ridge was caused by the following events:

This rip in the crust, from north to south, beneath the Himalayas, would have resulted in material from beneath bulging upward into the crack, as a pressurized inner tube of an old automobile tire bulges through a crack in the tire. This bulge is proposed to have resulted in the 90 east ridge!

You might be wondering, "Would other mountains produce similar effects tending to 'roll' the earth's crust?" There were indeed other mountain ranges, but they were less massive than the Himalayas. They would also tnd to produce a roll of the earth's crust, but the force of the most massive region would dominated the others. Yet they would have had their effect on the roll of the crust that moved the Himalayas southward; thus, the mass of other (mostly mountainous) regions on the earth that also were formed at the time of the flood would have formed a counterbalance so that the Himalayas would not roll all the way to the equator. A mechanical engineer would say the resultant force was the combined resultant of all the individual force vectors.

So we can understand that the regions of earth's crust moving into the equator region were stretching outward, bulging, while the previously "bulged" region was moving south, away from the equator, with less bulging force. The tension from this stretch would have ripped apart the crust at the place where the tension was greatest - where the bulge increase was greatest, which was south of the moving Himalayas. As the Himalayas continued to move southward, the already ripped crust moved south too, while another region moved south into the equatorial region where centrifugal force created more tension, increasing the bulge, and ultimately extending the rip. This elongated north-south rip in the crust allowed magma to escape into the rip, forming the ridge.

The result of this would have been a "stretch mark" on the crust of the earth, aligned north-south in concordance with the direction of the most extreme change in the bulge of the crust. This stretch mark would explain the 90 East Ridge.

Also, this explanation would require the ridge to be underneath or south of the mass concentration. This fits with the fact that the 90 East Ridge is directly south of the Himalayas. There is a short video about this with animation by Bryan Nickel on youtube.com. 15 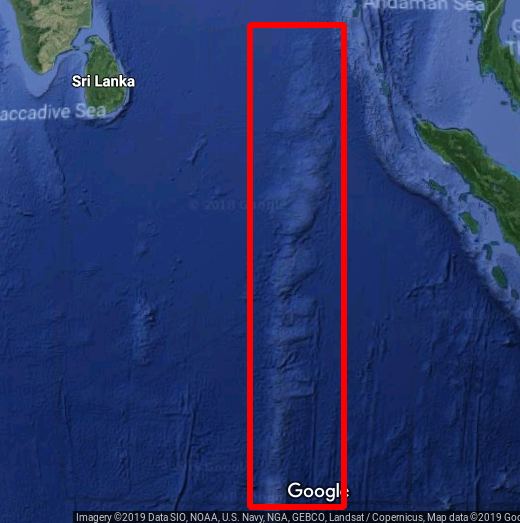 Why isn't there another ridge on the opposite side of earth?

The mantle was not as heavily fractured on the opposite side of the earth, according to Hydroplate Theory. The mantle was much weaker in the Indian Ocean area. For a video with animations dealing with this issue, see https://youtu.be/QQr7ZDWdKCk?t=292.

Other Indications of a Roll of the Earth's Crust

The 40-degree roll indicated by the ridge suggests to us where the previous North Pole was located, which would have been in central Asia. Locations where mammoths have been found would then have been in temperate zones, as shown in Figure 4. 17

Figure 4 - Location where mammoths are found before the roll 18

This can explain the mystery of how a mammoth could be discovered with an undigested plant in its body while the plant could not have grown in the conditions assumed for the region in which the mammoth was discovered. For more on why mammoths were rapidly frozen, see Mammoth Mystery. 18

Antarctica and the Arctic would then be in much warmer zones. Antarctica then would have been largely in a temperate zone (Fig. 5). 19 This can account for what we find - trees under the ice in Antarctica, for example. 20,21

Figure 5 - Position of Antarctica before the roll 22

Evidence at Steens Mountain in Oregon has scientists wondering how the earth's magnetic field changed so quickly - up to several degrees per day.

However, at Steens Mountain, when the field reversed 15.5 million years ago, the lava flows suggest that the field's axis was rotating 3-8° per day -- incredibly fast according to current thinking, in fact a thousand times faster than expected. 23

[T]he Steens Mountain record bears evidence of a complete magnetic reversal that occurred at an extraordinarily rapid pace (between 3 and 8 degrees per day) ... 24

[T]he rate at which the orientation of the ancient geomagnetic field had rotated could have reached an astounding 6° per day over an eight-day period ... 25

We have described a feature of the earth whose conventional explanation has problems, and for which a model that is based on Dr. Walt Brown's Hydroplate Theory has answers. Also, we see evidence in support of this proposed model, from magentic orientation at Steen's Mountain to trees in Antarctica. Dr. Brown's Hydroplate Theory explains the 90 East Ridge and many other real-world geological observations and is consistent with the world-wide flood mentioned in Genesis. To learn more about the Hydroplate Theory, see the references within this article to Dr. Brown's book and website.