The central question evolutionary science has yet to answer is by what natural processes is novel information introduced into the biological world. Until this question is answered, evolution will remain an organized system of unproven speculations and “just so” stories. There are two main events in the evolutionary tale that need this type of explanation: the origin of life and the mechanism for macroevolution. 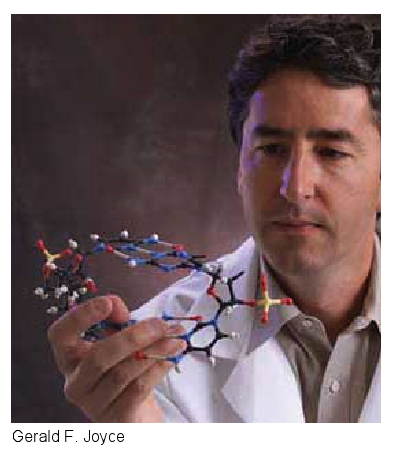 The origin of life is an especially difficult problem for materialists. Some of the remaining mysteries include the origin of ribose, the origin of nucleotides, the origin of amino acids, the origin of optically pure monomers, the polymerization of monomers, the ordering of monomers into biochemically meaningful arrangements, and so on. 1 ,2 ,3 Life today is based on the information-carrying molecules DNA and RNA, the catalytic action of enzymes, and structural proteins. Life is self-perpetuating. The simplest cells known have biochemical machinery that can store and retrieve information encoded in DNA, transcribe the information into RNA, and then translate the RNA into a sequence of amino acids to make enzymes and other proteins as shown in the diagram in Figure 1. 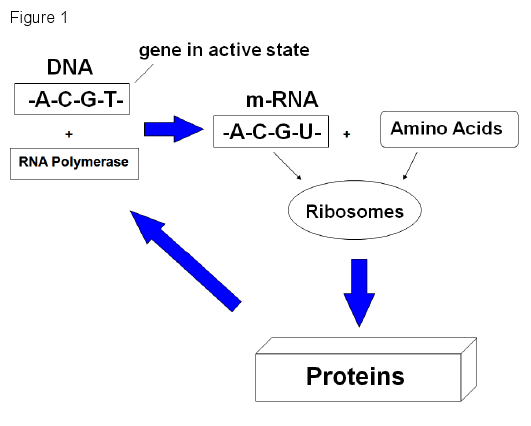 DNA is transcribed into messenger RNA with the assistance of an enzyme called RNA polymerase inside the cell nucleus. The messenger RNA is transported to the ribosome, a protein factory outside the nucleus. The RNA strand is there translated into a sequence of amino acids to form a protein. Some proteins are enzymes, such as RNA polymerase. An origin of life scenario needs to explain the origin of this information processing system.

One theory that has been advanced is called the “RNA World” hypothesis. This theory envisions early life in which RNA played a dual role of information carrier and chemical catalyst. This would reduce the problem of the origin of life to the origin of RNA that is able to replicate itself. Indeed, there are RNA molecules that are known to catalyze chemical reactions. Earlier this year, scientists lead by Gerald F. Joyce at the Scripps Research Institute reported the creation of RNA molecules that can self-replicate. 4 ,5

Variants of A, B, A’, and B’ were used to do competition experiments to generate more efficient enzymes.

The creation of this self-replicating RNA enzymatic system was ingenious. However, it does little to solve the riddle of a natural origin of life. Note that the monomers and enzymes were artificial, read “designed”. The self-replication process continued as long as more substrate was provided, but the substrates themselves had to be created independent of the system. What these researchers have demonstrated is that it took highly trained scientists years of research to bring this system into existence. There is no evidence this system could occur naturally or that the system could ever evolve into something new such as the present DNA/RNA/ribosome/ protein enzyme paradigm of biology. It took intelligence to make this system, something beyond mere chemistry and physics. These researchers plan to explore the “evolution” of their system to see if new functionality will develop. If any new functionality does emerge, its cause will be likely traced back to the scientists themselves.

In 2008 a team headed by Harvard professor Anthony Herrel reported results from a 36-year experiment with lizards that allegedly showed rapid evolution in action. 6 ,7 In 1971, five pairs of lizards (five males and five females) were moved from one tiny Croatian island to another where there was initially none of the transplanted species. However, there was another species of lizard already on the island. After 36 years, researchers visited the second island to see how the transplanted lizards were faring. The indigenous lizard species on the second island was now extinct. Moreover, the transplanted species was not present in its original variety; instead, a new phenotype was found. The original lizards from the first island preferred insects, ate small amounts of plant matter, were territorial, and had a relatively low population density. The new phenotype on the second island ate much plant matter, was less territorial, and had a relatively high population density. The gut of the new lizards was different from that of the original group. The gut was now longer and had cecal valves which slow the movement of food through the digestive tract facilitating the digestion of plants. Nematodes, roundworms that aid in the fermentation of plants, were found in the hind gut. The nucleotide sequences of the mitochondrial DNA in the original and modified species were identical showing the lizards were related by descent. Some scientists have concluded that the original lizards had evolved new structures, especially the cecal valves, by the random mutation-natural selection mechanism in only 30 generations. 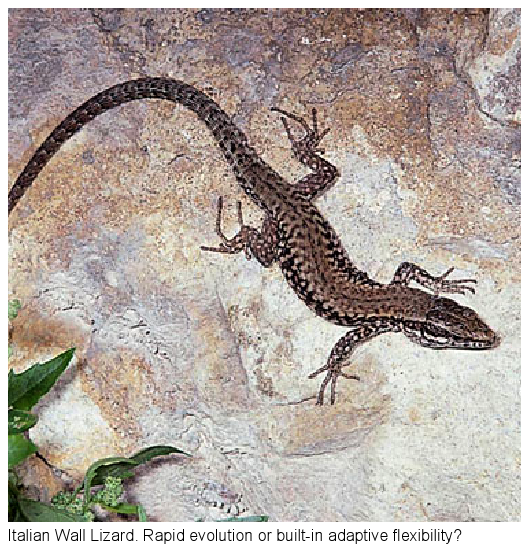 Many examples of rapid phenotype change are now known, so much so that evolutionists acknowledge rapid change is common. This is ironic in that for many years evolutionists thought change was a very slow process, taking place on geological timescales. Young earth creationists, on the other hand, have always said variation within kinds could be rapid. Indeed, rapid speciation is the only explanation for how the limited number of animals on the Ark could have provided the rich diversity of life on earth in just a few thousand years. 8

An important question is whether the mutation-selection mechanism is up to the task of creating the complex specified information required for the building of new adaptive structures in only a few generations. In other words, can a random mutation process write the required code in the DNA that will create the new structures in a short time? Michael Behe, author of Darwin’s Black Box and a professor of biochemistry at Lehigh University, has reported findings in his recent book The Edge of Evolution that have direct bearing on this question. 9 Behe studied malaria (a eukaryote) and its adaptation to antibiotics. There have been 1 billion people infected with malaria in the last 50 years. An infected individual may have a trillion parasites. Hence there have been 1021 malaria parasites worldwide in the last 50 years. Resistance to the antibiotic chloroquine has appeared about ten times over this interval. Hence, the chance or developing chloroquine resistance is 1 out of 1020. Note this is a result derived from observation and not a theoretical model. Resistance to chloroquine involves two key mutations that must both be in place to impart resistance. Behe refers to the probability of developing chloroquine resistance in malaria (getting a specific double mutation) a Chloroquine Complexity Cluster or CCC. There have been about 5000 species of mammals. Assume there are one million of each mammal species at any given time, a generation span of one year, and that has gone on for 200 million years. In that case there would have been 1018 mammals that ever lived. The chance of a single CCC mutation occurring in all those organisms would be only one in 100. Yet Darwinian evolution is supposed to account for bats, whales, humans, elephants, etc. without any mutations the complexity of a CCC. Most mutations are either harmful or neutral. This analysis reveals the impotence of the mutation-selection mechanism to generate the complex genetic novelty required for macroevolution. Unlikely mutations can only occur in gigantic populations.

The rapid speciation of the lizards on the second island is consistent with recessive genetic information that was expressed as needed, built-in by design, and not generated by accident (mutation-selection). The number of mutations required to develop new structures would surely be out of reach of the mutation-selection mechanism in only 30 generations with a relatively small population. While rare, the cecal valves observed in the transplanted lizards are also observed in other lizards of the same order (squamates) suggesting the information was already present in the original lizards. It would be interesting to take the transplanted lizards and put them into a vegetation- poor/insect-rich environment to see if they would rapidly “evolve” back into the original species. Such reversible evolution has been observed in the case of “Darwin’s finches” where the size and length of beaks vary with the climate. 10

There are other examples of apparent rapid speciation. Take guppies for example. In South America there are two well known species of guppies that differ in their gestational behavior. There are two strains that are adapted to two different predators. The first strain matures late and has relatively fewer offspring. 11 Its predator eats young guppies. The second strain matures early and has many offspring. Its predator prefers mature adult guppies. The second strain was moved to a habitat where the predator liked young guppies. There was none of the first strain present. After two years, the entire guppy population matured late and had fewer offspring. This rate of change was too fast for evolution; the predator induced the changes, but the information must have been already there.

The potential for rapid speciation is implied by the biblical record. The original created kinds and the animal pairs on the Ark no doubt contained all the genetic potential to rapidly speciate into the diversity we see today as they adapted to the various environments on the earth.