As a toxicologist working for the United States Environmental Protection Agency, I have become increasingly aware that the biggest environmental concern of the general populous has little to do with the chemicals and air pollutants that I study so intently every day. Not one of my neighbors, friends, or relatives has ever asked me how this chemical or that chemical affects their health. Instead, the question I’m most often asked, by a large margin, is “what do you think about global warming?” To be honest, I doubt they really care about what I think. What they probably mean is “what does the big, powerful, and influential USEPA think about global warming?” For the answer to that latter question I refer them to the USEPA website, www.epa.gov/climatechange. But after pushing the big red button on my desk that chimes “that was easy,” I start feeling a bit guilty. I’ve read the EPA perspective, and there are a number of opinions in it that, as a Christian and a Creationist, I do not agree with and some that I’m not sure about. As much to sort things out in my own head as to edify this readership, I’d like to take you for a walk through the EPA website and compare some of the statements therein with what I have read in creationists’ scientific literature, particularly a recent article by Dr. Larry Vardiman, Chairman of the Astro/ Geophysics Department of the Institute for Creation Research (ICR). 1  Perhaps in doing so together, we can begin to understand the perspective of a bigger, more powerful and ultimately more influential entity than the USEPA, our creator God. First of all, while disagreeing on the amount of time involved, both the USEPA and Dr. Vardiman acknowledge that significant climate change has occurred throughout earth’s history without man’s intervention. Some natural causes for such climate change discussed by both parties include changes in the earth’s orbit, 2  changes in the sun’s intensity, 3  and volcanic eruptions. Volcanoes can affect the climate because they can emit aerosols and carbon dioxide into the atmosphere. Aerosols do not produce long-term change because they leave the atmosphere not long after they are emitted. However, carbon dioxide (CO2) in the atmosphere can contribute to what is referred to as the “greenhouse effect.” According to the USGS Volcano Hazards Program, human activities now emit 150 times as much CO2 as volcanoes (whose emissions are relatively modest compared to some earlier times). 4

There is no disagreement regarding the current trend in atmospheric carbon dioxide levels. Numerous bodies of evidence indicate that the concentration of carbon dioxide in the air, as shown in Figure 1, has been increasing exponentially for almost 50 years now. The data depicted in Figure 1 below were collected by C. C. Keeling of the Scripps Institute of Oceanography at the Mauna Loa Observatory, Hawaii. 5 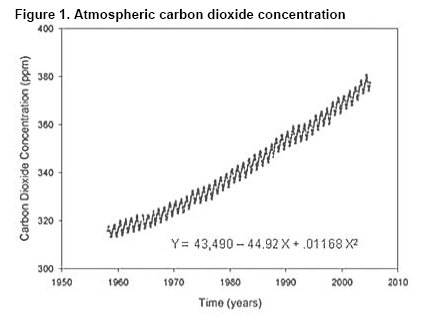 Dr. Vardiman analyzed three data sets in his analysis of recent warming trends, (1) the sea-surface temperature in the Gulf of Alaska, (2) the frequency of hurricanes in the southeastern Atlantic and Caribbean, and (3) the polar extent of sea ice in the Arctic Ocean. Figures 2-4 show that the trends for all three processes seem to be consistent with global warming for at least the short term. Seasurface temperature in the Gulf of Alaska has increased about 3% over the past 30 years. Hurricane frequency in the western Atlantic appears to have increased about 3% over the past 150 years. And, the Arctic sea-ice extent has decreased about 5% over the past 25 years. Based on these limited observations, it appears likely that global warming seems to be occurring over at least the past 30- 50 years. Dr. Vardiman emphasized, however, that because of the limited spatial coverage and short time period of these data, it is still not possible to say if these trends will continue. There may be even longer-period fluctuations which we don’t yet see in the data. 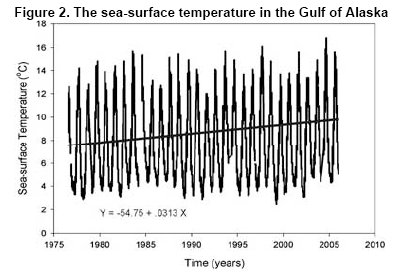 Figure 2 - The sea-surface temperature in the Gulf of Alaska 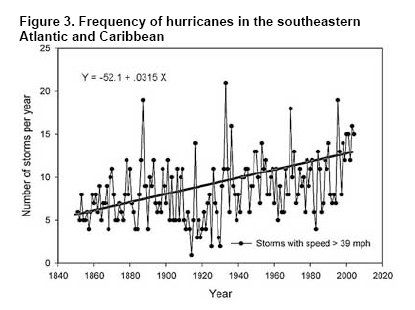 Figure 3 - Frequency of hurricanes in the southeastern Atlantic and Caribbean 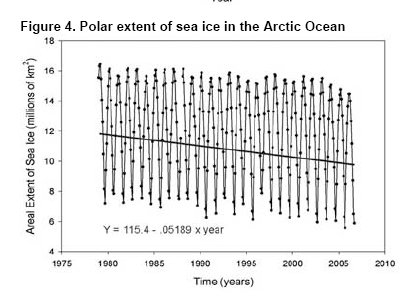 Figure 4 - Polar extent of sea ice in the Arctic Ocean

When long-period records of data are plotted, oscillations for many periods are often seen. In fact, the EPA website contains extrapolations back millions of years, showing significant fluctuations of magnitude equal to or greater than what is being observed today. 6

While the two sides may agree that some research questions remain unanswered, they do not appear to agree on the extent to which additional resources and funding will help to resolve global warming. Due to growing concerns in this area expressed by the media, EPA and other secular organizations, a great deal of government money is being spent to address the areas of scientific uncertainty identified above. 7 Dr. Vardiman’s perspective, and the perspective of many Christians and young earth creationists, is that such intense scrutiny and concern may not be justified. Global warming may affect some parts of our society negatively but would likely benefit others. In fact, the current warming trend may be returning our global climate closer to that prevalent in the Garden of Eden. In any case, it is likely that the global warming issue is not the catastrophic concern that many in the media currently convey. Now, going back to my real area of expertise, would anyone like to ask me about toxic air pollutants? I’m pretty sure that the Garden of Eden contained less ozone and particulate matter than we breathe today.

Table 1. What is believed to be known about the global warming issue?

Table 2. What is likely to be true about the global warming issue?

Table 3. What should be done about the global warming issue?