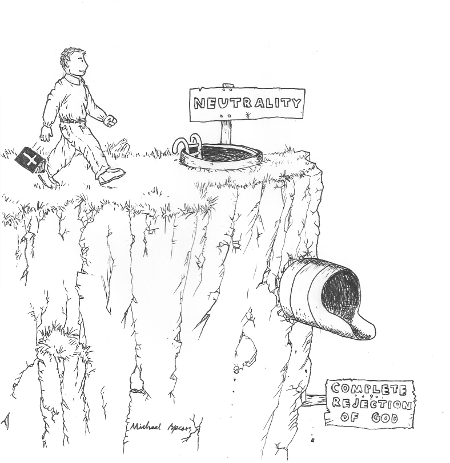 Have you ever had a debate with anyone about something, and the first thing they want you to do is come to their supposed “neutral ground?” Before the question about the existance of neutral ground is answered, it should be understood that what is considered by unbelievers as “neutral ground” and true objectivity are not the same thing. Everyone has a bias based on their world view, which is either based on a Biblical foundation or one that is not, that is, it is based on the atheistic assumptions of evolution. Creationists and evolutionists obviously have a different worldview—a different ultimate standard by which all evidence is interpreted. 1 Without most people even realizing it, both creationists and evolutionists use the same raw data to support their position. It is illogical to think that the evidence alone is proof to most people of either position. The evidence will support whatever presuppositions the biased observer brings to view the evidence. Some will look at the evidence such as fossils and see them showing an evolutionary history. Others will look at those same fossils and see catastrophic upheaval supporting the global flood of Noah. The creationist worldview dictates that God’s Word is truth, and all evidence is seen from that perspective, while the evolutionist worldview dictates that man decides “truth”, and all interpretation of evidence is decided upon by man.

Dr. Jason Lisle, in his recent book, states, "Much of the frustration in arguments over origins stems from a failure to recognize that creationists and evolutionists must interpret the same data differently due to their different worldviews. Many people do not want to accept the fact that all evidence must be interpreted in light of prior beliefs--a faith commitment of some kind." 2

Don't misunderstand and think that evidence is not important in the creation/evolution debate. Evidence as is found in the field of information science provides compelling arguments for creation. Whenever we find any sort of information, certain rules or theorems apply, such as:

There is also the argument of irreducible complexity that is found in living things that supports the creationist position. Every living cell of every organism contains a host of complex biochemical machines, each cooperating with the others to enable the survival of the cell. Interdependent parts are a real challenge to the idea of single cell-to-people evolution. Each part cannot survive without the others, and as such a system, they are considered to be "irreducibly complex" because its complexity cannot be reduced without destroying its functionality. It is statistically improbable that any irreducibly complex system could arise by an evolutionary process since every piece requires all the other pieces to exist at the same time.

Age indicators and dating methods are also a point of conflict in the creation/evolution debate. There are a number of evidences that challenge the secular claim that the earth is billions of years old such as Carbon-14 (C-14). Since C-14 has a half life of approximately 5730 years, it would decay to being undetectable after 100,000 years. In fact, if the whole mass of the earth were C-14, after one million years not even one atom would be left. C-14 is even found in rock layers that evolutionists claim to be hundreds of millions years old. C-14 is also found in diamonds that the evolutionary view dates to be over a billion years old.

We have good evidence to support the Biblical worldview of reality, and evidence can help show the inconsistencies with an evolutionary worldview. Most people have not really given much thought to their worldview. Our worldview is like having on mental glasses that color our perceptions of reality and everything we see. Our worldview could be defined as our network of our most basic beliefs about reality, in light of which all observations are interpreted. 5

The consistent biblical creationist is one whose worldview is based on the Bible and not interpretations of science; this is his or her ultimate standard. 6 There is no single evolutionary worldview, but all evolutionary worldviews have certain features in common and are rationally defective. Their ultimate standard is often either naturalism or empiricism. Naturalism is the belief that nature is all that there is. Empiricism is the idea that all knowledge is gained from observation. Some beliefs do not comport with each other; in other words, they do not go well together. When considering a worldview, the criterion for whether it is a valid worldview or an invalid worldview is based on its being logically consistent. Another criterion is that a rational worldview must provide for the preconditions of intelligibility. Examples of this would be memory, the reliability of our senses, and the laws of logic. A logically correct world view must provide these preconditions of intelligibility, because without them we could not know anything about the universe. 7

Neutral ground is an unbiblical concept because God says that you are either for Him or against him, there is no other position possible. In reality neutral ground is therefore not neutral. Christians who try to debate on "neutral ground" have already lost since they have given up what they are trying to defend. The plea for Christians to surrender to neutrality in their thinking is not uncommon, but it strikes at the very heart of our faith and our faithfulness to God. Satan loves it when Christians surrender their distinctive religious beliefs, to put those beliefs on the shelf and take a neutral attitude in their thinking. More than anything this would prevent belief in Jesus Christ as Lord and make professing Christians impotent in their witness, aimless in their walk, and disarmed in their battle with the principalities and powers of this world. Dr. Greg Bahnsen, one of the greatest debaters of the last century, declares, "Contrary to neutrality's demand, God's word demands unreserved allegiance to God and His truth in all our thought and scholarly endeavors." 8

Jesus is the one:

In whom are hid all the treasures of wisdom and knowledge. And this I say, lest any man should beguile you with enticing words. For though I be absent in the flesh, yet am I with you in the spirit, joying and beholding your order, and the stedfastness of your faith in Christ. As ye have therefore received Christ Jesus the Lord, so walk ye in him: Rooted and built up in him, and stablished in the faith, as ye have been taught, abounding therein with thanksgiving. Beware lest any man spoil you through philosophy and vain deceit, after the tradition of men, after the rudiments of the world, and not after Christ. (Colossians 2:3-8)

Note that it is all wisdom and knowledge that is deposited in the person of Jesus Christ. It does not matter if it is Shakespeare, chemical compositions, historical events, or the laws of logic. Every academic pursuit and every thought must be related to Jesus Christ, for Jesus is the way, the truth, and the life. 9

To avoid Christ in your thoughts at any point is to be misled, untruthful, and spiritually diseased. To put aside your Christian commitments when it comes to defending the faith is willfully to steer away from the only path to wisdom and truth found in Christ. It is not the end or outcome of knowledge to fear the Lord; it is the beginning of knowledge to reverence Him. 10 It is very dangerous to fail to see the necessity of Christ in all our thinking. One must be presuppositionally committed to Christ in the world of thought, not neutral, and firmly tied down to the faith which he has been taught, or else the persuasive argumentation of secular thought will delude him. By attempting to be "neutral" in your thought you become a prime target for being robbed by "vain philosophy" of all the treasures of "wisdom and knowledge" which are deposited in Christ alone. Vain philosophy is that which follows the world and not Christ. It is submitting to the world's demands and not being committed to Christ in all our thinking.

There is no such thing as neutral ground! Jesus stated plainly in Matthew and Luke that:

There is no fence sitting or neutral ground according to Jesus. Attempting to be neutral in one's intellectual endeavors is tantamount to striving to be like the unbeliever that is in rebellion to God. Jesus declared that we are to be set apart from the unbeliever by the truth of God's word. 11

One has to make this basic choice in his thinking: to be set apart by God's truth or to be alienated from the life of God. 12 Either have "the mind of Christ" 13 or the "vain mind of the Gentiles." 14 Either "bring every thought into captivity to the obedience of Christ" 15 or continue as "enemies in your mind." 16

The Christian who strives after neutrality in his thought is found actually to be endeavoring to efface the fact that that he is a Christian! By denying his distinctive religious commitment he is reduced to apostate thought patterns and absorbed into the world of unbelief. Attempting to find a compromise between the demands of worldly neutrality, or agnosticism, and the doctrines of Christ's word results in the rejection of Christ's distinctive Lordship by obliterating the great gulf between the thinking of the old man and that of the new man. 17 Neutrality is nothing short of immorality and friendship with the world. Therefore whoever wishes to be a friend of the world makes himself an enemy of God. 18