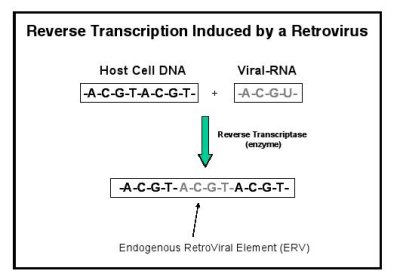 One protein alleged to demonstrate common ancestry is cytochrome c. Cytochrome c is ubiquitous in living things. As a much as 66% of the amino acids in cytochrome c vary among various species, suggesting only a third of the amino acids are required for the protein for function. Presumably, the extent to which the remaining 66% amino acids differ among organisms is the result of time and chance mutations, or genetic drift. But there is indirect evidence that these amino acids are more than mere placeholders, that they do serve a function. For example, the human genome consists of roughly 30,000 genes that must code for 300,000 proteins. Clearly, each gene must code for more than one protein. This means that a given section of protein coding DNA may have overlapping codes for several proteins with the code sequences defined by unique starting and stopping points. This would be equivalent to writing a paragraph where a new paragraph could be obtained if one started reading from the second letter of the first word instead of the first. The implication for cytochrome c is that the apparently non-essential amino acids may reflect part of the genetic code that is essential for another gene product such as another protein. If so, the apparently nonessential amino acids would reflect essential code that was not the result of a random mutation process. Also, the amino acid sequences of the cytochrome c molecules in humans and rhesus monkeys differ by only one amino acid despite the alleged 50 million years since the last common ancestor. The lack of change in the cytochrome c molecule since divergence would imply the DNA are preserved, presumably for function. The data are at least as consistent with the idea that an intelligent designer made the DNA that codes for cytochrome c (and simultaneously other gene products) as required for each organism; similar organisms would have more similar coding and amino acids sequences than dissimilar organisms.

Most of the DNA found in the human genome does not code for proteins. Several types of DNA that do not code for proteins have been identified including transposons, SINEs, LINEs, pseudogenes, and endogenous retroviral elements (ERVs) among others. 1 ,2  This non-protein coding DNA has been often referred to as “junk” because it is assumed to be the left-overs of a random evolutionary process. Some of the DNA found in various organisms appears to have been inserted by retroviruses. Presumably, these insertions into the germ cell DNA have been rare and at random locations in the genome. Hence, if any two species, say monkeys and humans, had the same retroviral element (ERV) in the same location in their respective genomes (this is observed), this would be best explained by common ancestry, because chance insertions in the same locations in extant organisms would be very unlikely. This inference of common ancestry from the ERV data is based on several assumptions: 1) the vast majority of ERVs, being the result of viral infections, have no beneficial function, 2) the DNA code for the ERVs has remained essentially intact and in the same location over millions of generations, 3) ERVs insertions have always been non-specific with respect to location, 4) God would not have separately created organisms with the same ERVs in the same locations in their genomes, and 5) ERVs are the result of viral infection. On the other hand, design would be implicated if it could be demonstrated that the insertion of ERVs is specific, ERVs have beneficial function, or if similar ERVs were found at the same locations in the genomes of unrelated organisms (convergence). We’ll explore the data after a brief discussion of how retroviruses work.

In normal cells, segments of DNA are transcribed into strands of RNA. The RNA sequence is then translated into an amino acid sequence in the ribosomes to form a protein. Viruses consist of either DNA or RNA inside a protein sheath. A virus infects a cell by attaching itself to the cell wall and injecting its nucleic acid material. Retroviruses contain RNA, and once injected into the cell, the retroviral RNA is then transcribed into DNA (hence the term retrovirus) which is then spliced into the cell’s genome. The viral DNA strand, using the cell’s biochemical machinery, is then used to generate new viruses within the cell (protein sheaths and RNA segments for the core). Eventually this replication process destroys the cell and the new viral particles are released. However, sometimes the spliced viral DNA is not expressed (used to manufacture new viruses) allowing the survival of the cell, but with a modified genetic code. The descendants of the infected cell will inherit the viral DNA strand.

Now, are there ERVs that have a beneficial function? If ERVs have function, then it can be argued that they are not the result of some purposeless, random viral infection but were designed for the benefit of the organism.

Consider the following excerpts from an article that show ERVs have several beneficial functions:

Human endogenous retroviruses (HERVs) have recently been suggested as mediators of normal biological processes such as cellular differentiation and regulation of gene expression. …Elucidation of the mechanisms regulating HERV biology should provide information about fundamental cellular activities. …We propose that the evolutionary persistence of endogenous retroviruses in the genomes of eukaryotic cells reflects their indispensability in important normal functions in specialized cellular environments.

The large number of solitary LTRs and complete HERVs may benefit the host genome by contributing regulatory enhancer sequences to genes in their vicinity. At present five human genes have been shown to be transcriptionally regulated by HERV LTRs. These are the salivary amylase, ZNF80, cytochrome c1, Krüppel-like H-plk and phospholipase A2-L (PLA2L) genes. The potential for beneficial effects provided by these LTRs could represent a fine functional balance for specific gene regulation in the host genome. Moreover, accumulated changes in gene regulation are likely to be important factors in the process of speciation. 3

In placental animals, retroviruses play a role in development:

The function of ERVs, particularly ERV3, in the placenta has been linked to several ERV activities: (1) provision of immunological protection of the embryo and the fetus; (2) regulation of trophoblast 4  cell growth; (3) protection of the fetus from unwanted maternal material, and (4) protection against infection by a related exogenous retrovirus, i.e. ‘germline vaccination’. 5

Hence there is evidence that ERVs help in gene regulation, fetal development, and may even help prevent viral infections! Additional functions for ERVs may be found as research continues.

From an evolutionary point of view, the fact that so many ERVs have retained their DNA sequence and location in respective organisms is best explained by there being beneficial functions that natural selection would conserve, otherwise genetic drift might be expected to scramble the ERV coding over the generations, contrary to evidence.

There is evidence that ERVs insertions are specific with respect to location:

The completion of the human genome sequence has made possible genome-wide studies of retroviral DNA integration. Here we report an analysis of 3,127 integration site sequences from human cells. We compared retroviral vectors derived from human immunodeficiency virus (HIV), avian sarcoma-leukosis virus (ASLV), and murine leukemia virus (MLV). Effects of gene activity on integration targeting were assessed by transcriptional profiling of infected cells. Integration by HIV vectors, analyzed in two primary cell types and several cell lines, strongly favored active genes. An analysis of the effects of tissue-specific transcription showed that it resulted in tissue-specific integration targeting by HIV, though the effect was quantitatively modest. Chromosomal regions rich in expressed genes were favored for HIV integration, but these regions were found to be interleaved with unfavorable regions at CpG islands. MLV vectors showed a strong bias in favor of integration near transcription start sites, as reported previously. ASLV vectors showed only a weak preference for active genes and no preference for transcription start regions. Thus, each of the three retroviruses studied showed unique integration site preferences, suggesting that virus-specific binding of integration complexes to chromatin features likely guides site selection (emphasis added). 6

If ERV insertions are specific as the above implies, similar ERV sequences found at the same positions in the genomes in various organisms may be explained simply by separate viral infections instead of common ancestry.

The questions of whether God independently created organisms with ERVs in the same locations in their genomes and whether ERVs are the result of viral infections are related. Although the ERVs appear to have resulted from viral infections, we don’t really know their origin, or that of viruses for that matter. What if God did indeed place the ERVs in the genomes of various organisms for beneficial purposes we are just beginning to understand? Perhaps viruses formed from the ERVs instead of the other way around. Or perhaps viruses were originally designed for benevolent purposes but have degraded somewhat since the Fall. Whatever happened, viruses in their present state could not have existed before cellular life because they require the biochemical infrastructures of cell in order to reproduce.

There is evidence of convergence of specific ERV sequences in humans and mice:

Together, these data strongly argue for a critical role of syncytin-A and -B in murine syncytiotrophoblast formation, thus unraveling a rather unique situation where two pairs of endogenous retroviruses, independently acquired by the primate and rodent lineages, would have been positively selected for a convergent physiological role (emphasis added). 7

Below is another example of where the ERV results don’t support common ancestry.

Evidence from DNA sequencing studies strongly indicated that humans and chimpanzees are more closely related to each other than either is to gorillas. However, precise details of the nature of the evolutionary separation of the lineage leading to humans from those leading to the African great apes have remained uncertain. The unique insertion sites of endogenous retroviruses, like those of other transposable genetic elements, should be useful for resolving phylogenetic relationships among closely related species. We identified a human endogenous retrovirus K (HERV-K) provirus that is present at the orthologous position in the gorilla and chimpanzee genomes, but not in the human genome. Humans contain an intact preintegration site at this locus. 8

Exactly what patterns most ERVs will ultimately show across species is still an open question. Only seven 9  of the ~30,000 10 ERVs in the human genome have shown the expected pattern (consistent with common ancestry) when compared with chimps, so its still too early to draw any firm conclusions. The fact that some ERVs have beneficial function, show some preference for insertion sites, and can appear in the same location in unrelated species is consistent with purposeful design without common ancestry.