As part of my December 2006 trip to Ecuador, I had the opportunity to visit the extraordinary Petrified Forest of Puyango hidden in a living tropical forest. The forest is located near the Peruvian border in the provinces of Loja and El Oro in Southern Ecuador (Figure 1). 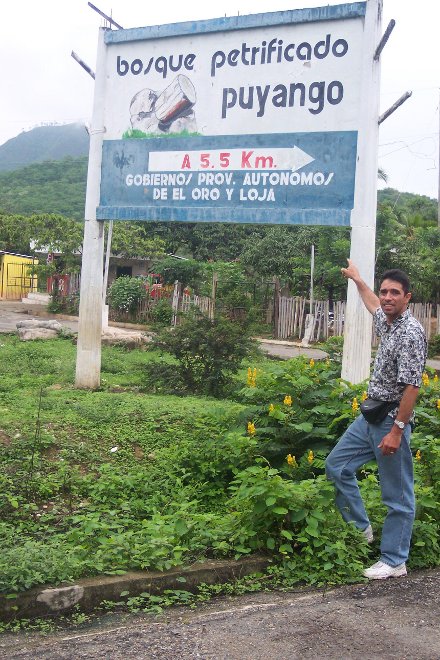 Figure 1 - Entrance to the Petrified Forest

The forest is at an altitude between 812 ft. to 2460 ft. above sea level and covers an area of about 6567 acres. I finally found the site after a five-hour trip from Guayaquil, the main port of the country. In addition to petrified wood, all sorts of fossilized creatures could be found, such as ammonites, sea turtles, sea shells, snails, and fish, just to name a few (Figures 3-5).

In a recent article I addressed fossil formation from a creationist point of view,1 so in order to better understand the conditions of fossil formation, one must consider the polystrate fossil. These types of unique and complex fossils have left evolutionists puzzled for decades. Polystrate fossils form under unique conditions in which several layers of strata emerge. Fossilized tree trunks can be found running through several layers of strata, which evolutionists believe to be several thousand to millions of years old (Figure 2). 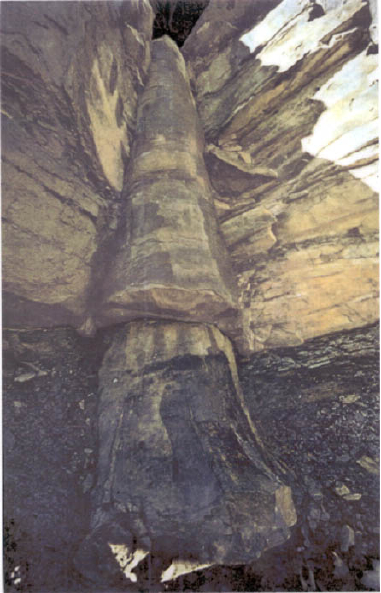 The 30 foot petrified tree shown in Figure 2 is one of hundreds found in the Kettles coal mines near Cookville, Tennessee. 2 The top and bottom appear in different coal seams dated thousands of years apart. Evolutionists believe that those logs grew there, even though the soil is too weak to support them. If the soil is too weak to support forest growth, why are coal seams always nearly found on layers of clay and rock? The answer is that those logs did not grow there but were uprooted, transported, and buried at another location.

Figure 3 shows me standing beside a log lacking roots taken in the Puyango Petrified Forest. Vigorous currents from floods sweep away vegetation, transporting logs and trunks to different locations. Interestingly enough, my tour guide told me these species of trees are found only in Chile several thousand kilometers away from where we were standing. 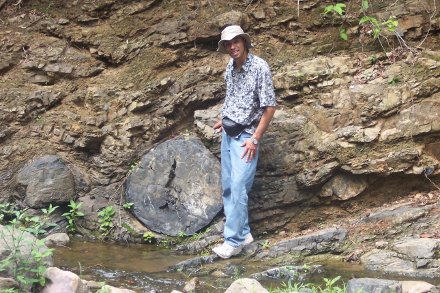 The same type of phenomenon took place in the 1980 explosion of Mt. St. Helen. Dr. Steven Austin asserts, “The landslide-generated waves on Spirit Lake stripped the forests from the slopes adjacent to the lake and created an enormous log mat, made up of millions of prone floating trunks that occupy about two square miles of the lake surface. These logs float freely as the wind blows them, and the decreasing size of the log mat indicates that the trees are gradually sinking to the lake floor. Careful observation of the floating log mat indicates that many trees float in upright position, with a root ball submerging the root end of the trunk, while the opposite end floats out of the water. Hundreds of upright floated and deposited logs have been grounded in shallow water along the shore of the lake. These trees, if buried in sediment, would appear to have been a forest which grew in place over hundreds of years, which is the standard geological interpretation for the upright petrified “forests” at Yellowstone National Park.”3 Also Dr. John Morris, talking about fossilized tree in Joggins Fossils Cliff, states, “Some of the fossilized trees are inclined, not directly in vertical growth positions. A few are found upside down. None of the tree root systems are complete; all have been truncated.”4

Several tree trunks are displayed in vertical position in the Petrified Forest. These fossil trunks broke into pieces after collapsing to the ground as displayed in Figure 4. 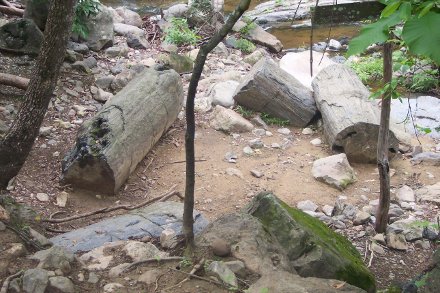 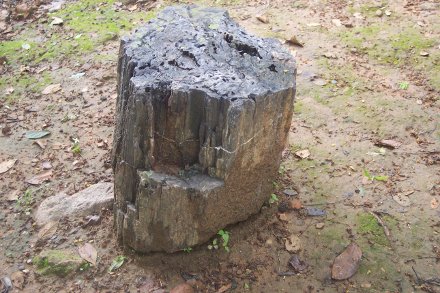 Figure 4-b - Remains of a vertical petrified tree

Both marine and land creature fossils can be found in the same location, even in the same strata. 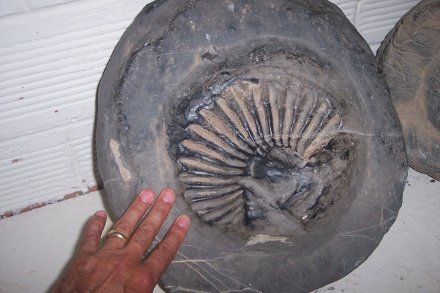 Figure 6 shows samples found entirely in the region of the Petrified Forest of Puyango. The proximity of these two different types of fossils further supports the unique mechanism by which these organisms were transported, buried, and fossilized. Muscles ordinarily die with the valves open. Formation of a fossil with closed valves as shown in Figure 6 requires rapid burial. Furthermore, the fossils were found at 812 ft above sea level, suggesting uplift after burial, possibly due to collision of tectonic plates. 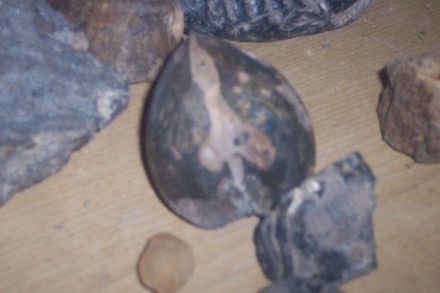 One shocking find was colossal snails about 20 inches in diameter (Figure 7). 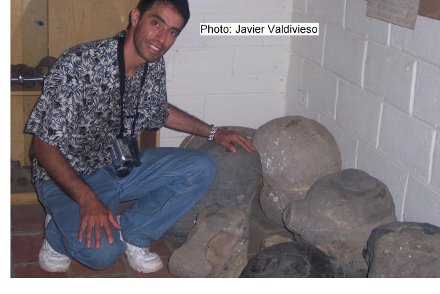 Snails of this magnitude cannot be found today. The living conditions of the pre-flood environment were most likely very different. A theory known as the Canopy Theory might be the key in explaining how animals grew to such gigantic proportions even though this theory presents difficulties of excessive heat accumulation in its mathematical model. However we do not know if some sort of atmospheric mechanism existed in the pre-flood world that could release this excessive heat to outer space. Oxygen content was much greater than the present atmosphere due to a canopy of water above the atmosphere which in turn increased the atmospheric pressure. 5 Insects that breathe through their skin grew in size as their oxygen intake was far greater than today. A dinosaurs’ size was also due to the amount of oxygen available as they inhaled large amounts of oxygen with their small lungs and nostrils. These and other ideas have been formulated to explain these facts.

My 2008 trip to the central mountains of Ecuador was guided by the Lord’s hands. Six days before my return home I had the privilege of sharing a message on Creation Evangelism. Shortly after my seminar, a guest approached me and revealed that locals had discovered a giant fossilized oyster on Chimborazo Volcano. The volcano has an altitude of 20,565 ft above sea level and is known to be an “inactive” stratovolcano and is Ecuador’s highest summit. Its last eruption is thought to have occurred sometime in the first millennium AD. Its summit is generally regarded as the spot on the surface farthest from the center of the Earth (since the Earth is not a perfect sphere), a distance of 6,384.4 km (3,968 mi). 6

I had visited the volcano years before. For someone to discover the giant oyster was amazing, considering the mountain is covered with snow year around. I was eager to see the giant oyster; however, the exact location was unknown. Two days before my return to North Carolina, I stopped by the National Polytechnic School to see some of my old friends. Something moved me to visit the Museum on Natural Science there. I introduced myself to the director who agreed to speak with me. He recognized me from a television interview a few days before. He is an evolutionist but extremely curious about the message of creation. He introduced me to the museum’s personnel including the Department Chief of Paleotólogy with whom I shared the creation message. He wore an expression of shock as he informed me they had several giant fossilized oysters found in the Chimborazo Volcano (Figure 8). 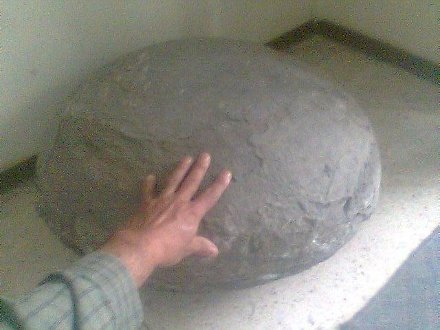 I ended in the right museum and department, the precise location where the discoverers had donated the fossils. At that moment a door had been opened to go further in depth about the message of creationism.

Giant snail fossils, polystrate fossils, and other unusual discoveries fit the biblical creation/flood model? Continental drift may have played a role in the elevated location of giant marine fossils, such as the giant oyster found on the Chimborazo Volcano and the giant mollusks located in the Puyango Forest. Fossil formation is due to rapid burial by catastrophic means. Water and tectonic activity assisted in massive removal, transportation, and deposition of sediment. The worldwide occurrences of these events support a historical worldwide flood rather than a local one as some proponents of Old Earth state.