Most information in this article comes from Nature’s Destiny
by Dr. Michael Denton. 1

About 60% of the sun’s radiation is in the visible range, only about one trillionth of one trillionth of the entire electromagnetic spectrum. Amazingly, this same range is what the air, the atmosphere, is transparent to. 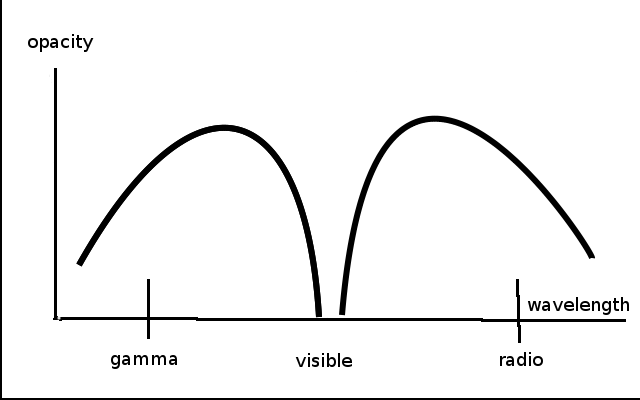 Of course, you may think, air is transparent! Obviously, everyone knows that! But, the amazing thing that everyone does not know, is that air is not transparent to wavelengths on either side of the visible range. A plot of atmospheric opacity versus wavelength has a notch in just the visible range of the spectrum (Figure 1). Opacity is the lack of transparency: the more opaque, the less transparent and vice-versa. This transparency of the atmosphere allows the light to penetrate to the earth’s surface, where photosynthesis can then occur.

Also, the water of the earth’s oceans is also transparent— in the same “notch”—in exactly the same range of the electromagnetic spectrum as is the atmosphere. This allows photosynthesis to occur in the oceans, underneath the water where plankton reside. But ultraviolet (UV) light is blocked by a thin layer of water, protecting aquatic life from damage.

The UV light from the sun can be damaging. The amount of light of this wavelength reaching earth’s surface is limited by the ozone layer and also by water vapor in the atmosphere. Also, the sun itself does not put out as much UV light as it does visible light. But some UV light does get through, and this is good! UV light is used to produce vitamin D, which is essential for life.

Also, the visible range of light provides just the right amount of energy required to stimulate most biochemical reactions (15–65 kilocalories per mole). Wavelengths with less energy would fail to stimulate reactions needed by life, and more energy would damage life.

As already noted, both water and air are transparent to the same wavelengths, visible light, which is amazingly well-suited for vision. If a shorter wavelength were used for vision, photons would carry additional energy, which would be destructive to biological molecules. Also, this radiation would be much more difficult to focus with a lens because higher-energy waves tend to not be bent (or blocked) by many materials. (This is why X-rays pass through flesh.)

On the other hand, if longer waves were used for vision, then we would loose resolution or detail in what we see. Longer wavelengths would be more difficult to detect since they would carry less energy. The energy of a single photon must be amplified many times by the photoreceptors in the eye in order for the weak signal to be useful. This is also evident in man-made devices, such as radios, which make use of longer wavelengths. The signal must be amplified. If any of you have ever used a crystal radio set, you know that there is no amplification, and the sound is very weak. Yet even this weak signal consists of not one, but many, photons. The eye, remember, can detect a single photon, which is a much weaker signal. In order to amplify this weaker signal there would need to be a larger amplification apparatus, which would increase the physical size of the photoreceptor unit. This would change the “pixel size” of an image to a larger size and would reduce the resolution, which means less detail.

As it is, the wavelengths of visible light are just right—not too long and not too short!

Remember, also, that we have a coincidence of several necessary factors for vision: the transparency of both air and water—the eye contains water—to the same visible light range, and the fitness of this visible range for vision.

Vision is limited by spherical and chromatic aberration, which increase with the size of the opening receiving light in the eye. To keep this opening small and limit these distortions, we have another problem—diffraction limiting resolution. The larger the wavelength, the larger the diffraction and the less the resolution. Increased resolution, as microscopes and telescopes provide, comes at the cost of a decreased field of view—obviously not desirable for living things.

To optimally balance all these factors requires a design like that actually found in the eye of man. The minimum size formed on the retina will be about 2 microns, which cannot be made smaller due to the limitations discussed above. Amazingly, this is actually the size of light detectors found in the eye of man. The size of an eye is limited by the fact that the supply of nutrients to the internal parts of the eye depends upon diffusion, and the supply by diffusion becomes more limited as the distance nutrients must travel increases. On the other hand, an eye too small would suffer from too few photoreceptors and consequent insufficient resolution.

Also, due to the physics of light waves, even if photoreceptors could be made smaller than 2 microns, there would be no improvement in resolution. As Denton states: “This is a remarkable coincidence. The two optical limits to the resolving power of the eye—the one set by the waveguide optics…the other set by the laws of classical optics…have the same value: 2 microns.”

Another limit on the physical size of photoreceptors to about 2 microns is that photoreceptors require many millions of rhodopsin molecules per cell to increase the probability that a single photon will encounter a rhodopsin molcule and thus be detected—important for low light or night vision. Reducing the cell size to gain more resolution means lowering the number of rhodopsin molecules and thereby reducing the probability of detecting single photons. It seems that the size of photoreceptor cells is just right for vision, and that the properties of visible light are just right for that size!

Water is the matrix in which life exists. Most living organisms have a lot of water in them. Humans are over 70% water.

Water has the following unique properties, which make it wonderful for life:

Proton conductance is unique to water and important in the vital life processes photosynthesis and phosphorylation.

The surface tension of water allows capillary action to occur, enabling water to carry nutrients up the trunks of tall trees to their leaves. Also, surface tension enables water to go deep into cracks in rocks where another unique property of water, expansion upon freezing, weathers the rock and helps create soil.

The low viscosity of water makes blood circulation and molecular movement inside a cell much easier; yet, if it were much lower, the fragile cellular mechanisms would be weakened.

Another property of water, its awesome ability as a solvent, dissolves the minerals out of rocks, which then can be absorbed by plant roots. Most rocks of earth’s crust consist largely of silicates, which are perfect for creating soil; soil, of course, is useful for plant life (and ultimately for animals and humans, too).

Another property of water protects plants from freezing— the insulating properties of solid water: frost, ice, and 3 snow. But, the thermal conductivity of liquid water is not a problem. It is a benefit, serving a useful purpose for life! The relatively high thermal conductivity of water allows it to transfer heat from the core of the body to the surface, where evaporation cools the organism.

Water’s high latent heat of evaporation, the amount of heat released when water evaporates, is one reason perspiration cools so well.

Another property of water helps keep organisms cool: the high heat capacity of water, that is, the ability of water to absorb large amounts of heat without changing temperature. This helps stabilize body temperature, which is important for temperature-dependent biochemical reactions.

Another benefit of water’s high heat capacity is that it allows the oceans to moderate the weather and the climate by maintaining the temperature in a range of approximately 0–100° C, the range in which water is a liquid, making life possible on earth, unlike places like the moon.

The temperature of the earth, buffered by the presence of liquid water, is also the range in which the metastability of carbon compounds is most pronounced, and this metastability is essential for life on earth!

What is metastability? Simply, unstable compounds easily break apart into constituents; stable compounds do not (at least not so easily). For example, metastable compounds can be “burned” for energy. But they don’t burn too readily, which is why we don’t burst into flames!

Consider another example of molecular metastability: hemoglobin. It needs to be able to combine with oxygen to carry oxygen to parts of the body that need it. However, once the hemoglobin arrives at a tissue in need of oxygen, it needs to release that oxygen. So hemoglobin needs to be stable enough to not loose the oxygen before reaching the destination cells and not be so stable that the oxygen cannot delivered to cells. Hemoglobin is just one example. There are countless other carbon compounds involved in life. Enzymes, the transparent parts of the eye, the strong muscles, the flexible skin, the trunk of a tree—all are made from carbon compounds.

Other Coincidences Necessary for Life

There are many other exciting properties of various substances involved in biological life that seem to be “just right” to allow life to exist on earth. Many have commented that it seems almost as though they had been designed to make life possible. For example, at higher air pressures, breathing is much more difficult. At lower pressures and at lower temperatures, body fluids would tend to vaporize much more readily. Yet another example: the strength of the bonds holding double-stranded DNA together allows for the two strands to come apart for cell replication but prevents the strands from unraveling when the cell is not dividing.

Why should so many seemingly unrelated properties be just right for life to exist? The probability of just a few of the coincidences mentioned above is pretty low. Then add in the many other coincidences not mentioned here, and it seems unlikely that all the laws of nature are the way they are, uniquely perfect for life, just by chance. This is consistent with the design of a creator.

To find out more about other, similar properties that are seemingly tuned for life, look at the book Nature’s Destiny, by Michael J. Denton. 1