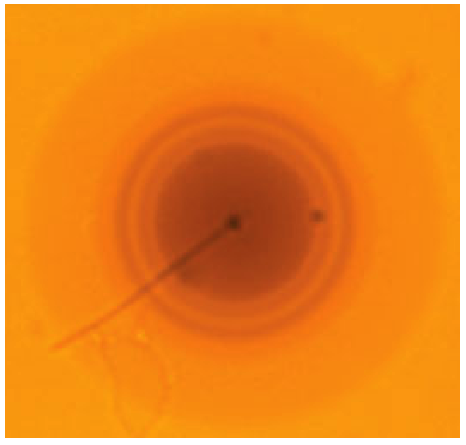 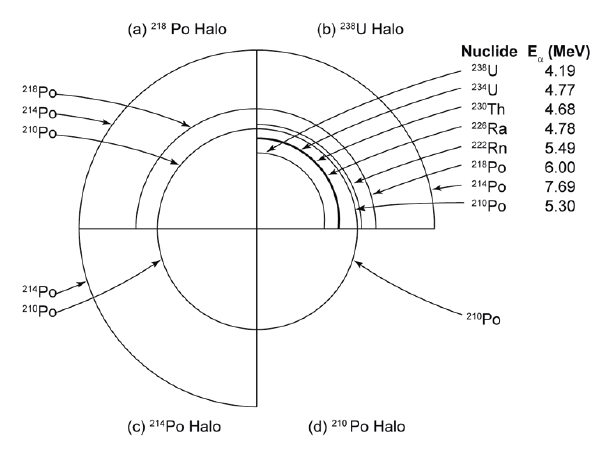 A couple of years ago, in the January 2006 issue of the TASC newsletter, Dr. Dan Reynolds reviewed competing interpretations of Drs. Robert Gentry and Andrew Snelling for polonium radiohalos. While both believe that these phenomena provide evidence for a young earth, Robert Gentry, refers to them as “Fingerprints of Creation” (www.halos.com), etched by God into granite during the creation week. Geologist Dr. Andrew Snelling, on the other hand, speculates that polonium radiohalos found in metamorphic rock formed during the Genesis Flood, and an episode of “grossly accelerated 238U decay.” Recently, Dr. Snelling traveled U.S. Highway 441 in our very own State of North Carolina to gather evidence in support of his theory. 1

In review, radiohalos are areas of discoloration found in rocks containing radioactive elements that undergo alpha decay. Alpha decay occurs when a radioactive element emits energetic alpha particles. The alpha particles are emitted randomly in all directions but stop at the same distance from the parent. After enough alpha decays have occurred, a spherical shell of discoloration results. Cross sectional specimens of these discolored areas can be studied with an optical microscope.

The uranium238 isotope decays ultimately into lead through 14 intermediate elements, 8 of which involve alpha decay. Each of the intermediate alpha emitting elements can form radiohalos, each with its own unique size (Figure 1). There are three isotopes of polonium (Po) in the decay chain of uranium-238. These are 218Po, 214Po, and 210Po, with half-lives of 3 minutes, 164 microseconds, and 138 days, respectively. The amazing fact is that there are radiohalos in Precambrian granite (basement rocks of the earth’s crust) that are attributable exclusively to these polonium isotopes without evidence of radiohalos from precursor elements, that is, the polonium appeared to be parentless or orphan. Dr. Gentry has observed that many of the polonium radiohalos appear to be isolated from any nearby uranium radiohalos which could theoretically be sources of the polonium or its precursors, suggesting that they were created ex nihilo, by God. Dr. Snelling believes that uranium-238 is the origin of the polonium radiohalos. To explain the extent of uranium-238 and polonium radiohalos frequently found together in biotite flakes in granite rock, he estimates that hundreds of millions of years worth of uranium-238 decay (at today’s rates) had to have occurred in a few days. 2 ,3  To explain how the polonium was separated from its parent uranium-238 and concentrated in nearby radiocenters to form polonium radiohalos, a hydrothermal fluid transport model was proposed. 2 ,4 ,5

Water-saturated sedimentary rocks release water as a by-product as they become deeply buried and transformed into regional metamorphic complexes. 6  This hot water could then act as a hydrothermal fluid transporting polonium and its precursors through cleavage planes and conduits to sites where polonium could accumulate and eventually form parentless radiohalos. Dr. Snelling argues that this same hydrothermal fluid transport model could explain the formation of polonium radiohalos in those regional metamorphic rocks where an adequate supply of uranium decay products occurred. 2

To test the hydrothermal fluid transport model for polonium radiohalo formation, nine samples of the metamorphosed Thunderhead Sandstone were collected from road-cut outcrops along U.S. Highway 441 between Cherokee, North Carolina, and Gatlinburg, Tennessee. This section of road cuts through the biotite, garnet, staurolite, and kyanite zones of the regional metamorphism. 7  These zones are named according to the first appearance of the distinctive metamorphic minerals which characterize them as the intensity of the metamorphism increased laterally. The boundaries between these zones, called isograds, are where mineral reactions have produced the new minerals because of the progressively higher temperatures and pressures.

Experiments have shown that mineral reactions in the staurolite isograd of the metamorphosed Thunderhead Sandstone would have resulted in large volumes of water. 8  According to Dr. Snelling, the resultant relatively large volumes of hydrothermal fluids in the rocks surrounding this isograd would have been ideal for the generation of polonium radiohalos. 9

Snelling (2008) collected nine samples of the metamorphosed Thunderhead Sandstone from road-cut outcrops along U.S. Highway 441 between Cherokee, North Carolina, and Gatlinburg, Tennessee. The total number of polonium radiohalos found in each sample was plotted against each sample’s relative position along the traverse through the metamorphic zones. Figure 2 illustrates that all samples contained polonium radiohalos, but that the two samples near the staurolite isograd (between the Garnet and Staurolite zones) contained approximately a 5-fold higher count of polonium radiohalos per sample. 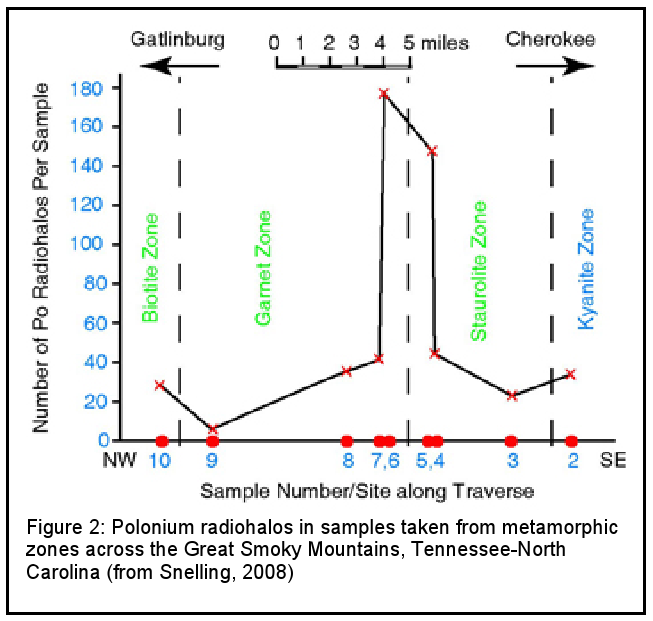 Thus, where the mineral reaction around the staurolite isograd has produced a lot of hot water, large numbers of polonium radiohalos have formed.

According to Dr. Snelling, these results verify the hydrothermal fluid transport model for polonium radiohalo formation. His theory is that the biotite flakes containing the polonium halos were formed in the sandstone only during the metamorphism early in the Flood year, and derived from uranium-238 decay. While it is still possible that these rocks were created during the during the creation week, as is speculated by Dr. Gentry, Dr. Snelling’s hypothesis does provide a reasonable explanation for the observed variations in polonium radiohalo findings across metamorphic rock zones along U.S. Highway 441 between Tennessee and North Carolina. Of course, both explanations are consistent with a Biblical Flood and a young earth and, according to Dr. Gentry’s website (www.halos.com), the National Academy of Sciences has been challenged but has yet to offer an old earth explanation for the polonium-halo evidence.