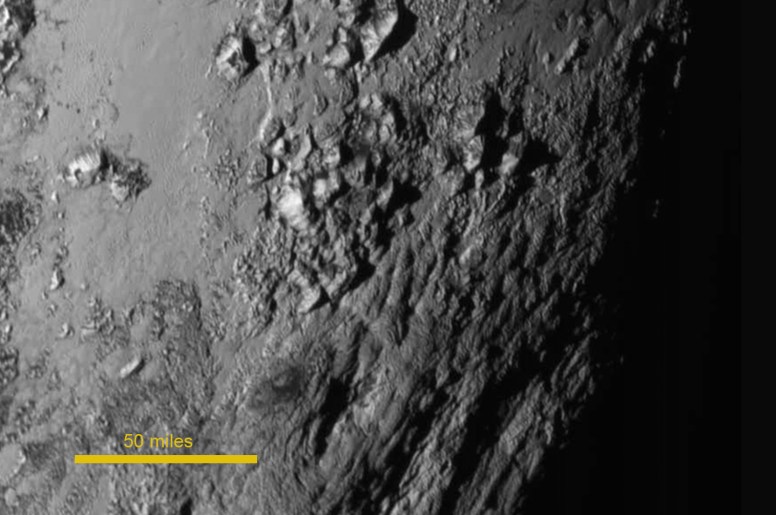 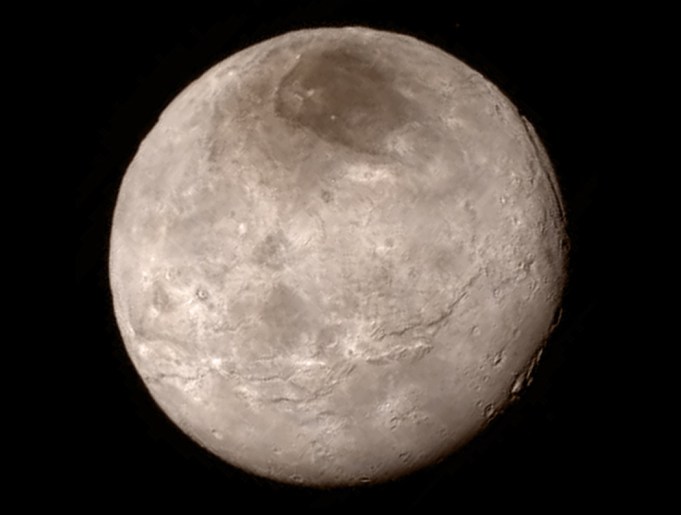 Fig. 2: Charon, moon of Pluto, having the same color as Pluto, and having few craters, but many cliffs, chasms, and a six-mile-deep canyon. Source: NASA/JHUAPL/SwRI 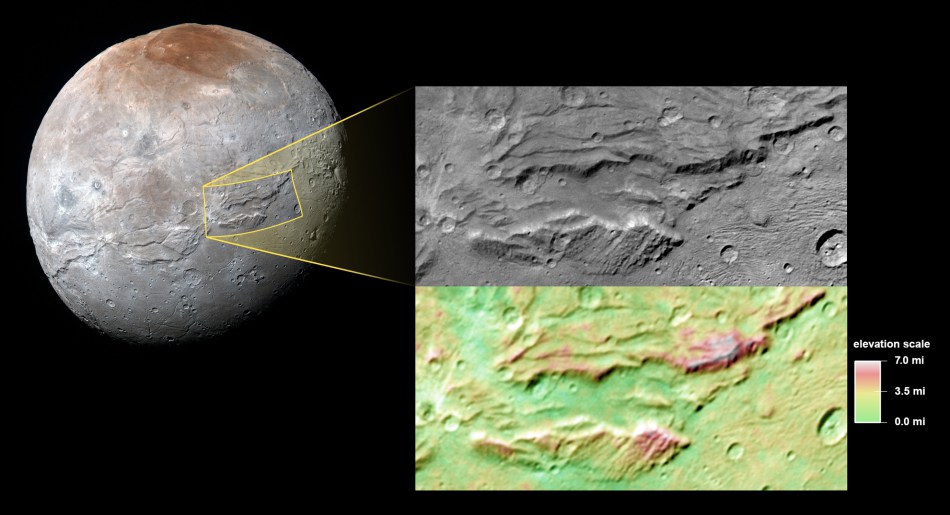 Fig. 3: Charon, moon of Pluto. Note the fractured equatorial surface. Some of the cliffs in the inset rise 7.0 US Customary statute miles high. Source: NASA/JHUAPL/SwRI 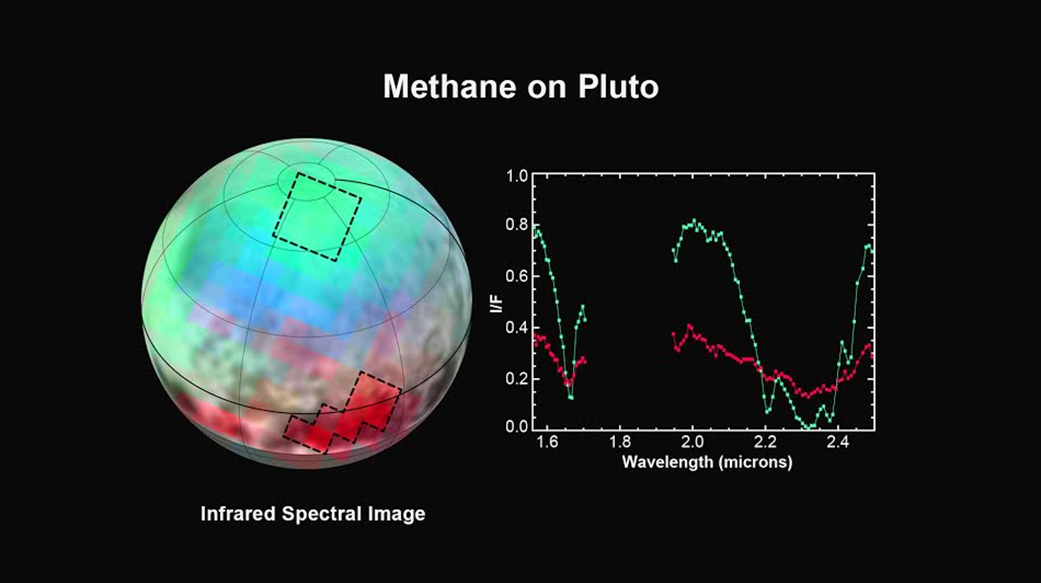 These findings point to youth, not age. Furthermore, the tallest mountains on Pluto, including Wright Mons (Pluto’s “Everest”), are volcanic. The volcanoes of Pluto spew ice, not lava. Wright Mons didn’t erupt during the flyby. But past eruptions left clear signs. (The ice is mostly water ice, plus some methane, nitrogen, and ammonia.) 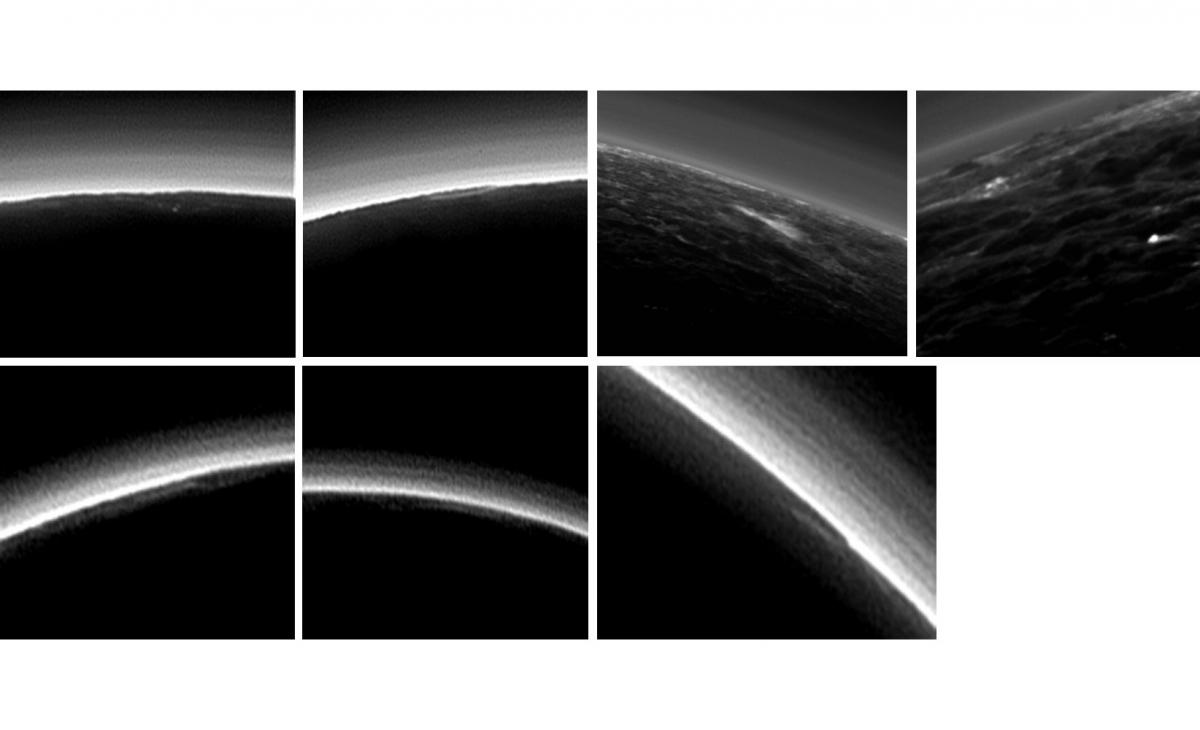 Figure 5: Condensate clouds on Pluto. The atmosphere on Pluto is thicker than it should be if it were as old as most workers assume. Source: NASA/JHUAPL/SwRI

And did New Horizons photograph clouds on Pluto? Two of its camera sets found some likely candidates. They lie low to the “ground” and look like condensates. Condensates imply warmth. If the dwarf planet were 4.6 billion years old, everything in the atmosphere should have condensed, then frozen. In fact, NASA fully expects the atmosphere on Pluto to collapse. Again, if Pluto is that old, why hasn’t its atmosphere collapsed already?

Charon turned out to have something NASA suspected even before New Horizons arrived: a subglacial ocean. Those cliffs, troughs, and canyons, especially at the equator, came about when parts of Charon’s surface pulled apart. The surface consists of water ice—which cracked. Why? Because underneath the ice, Charon had an ocean that stayed liquid. Then the ocean froze. When water freezes, it expands. Charon’s ocean did just that, and cracked the ice that covered it.1

Charon has even more evidence of “geological activity.” Landslides have taken place on Charon.

Pluto has water ice for a “ground” and nitrogen and methane ices above it. These ices actually flow as glaciers over the water ice.

The great heart shape in Pluto’s “southern” hemisphere alone presents a puzzle. Why should it have so few features? Where are the meteorite impact craters that scarred Earth’s Moon, for instance? 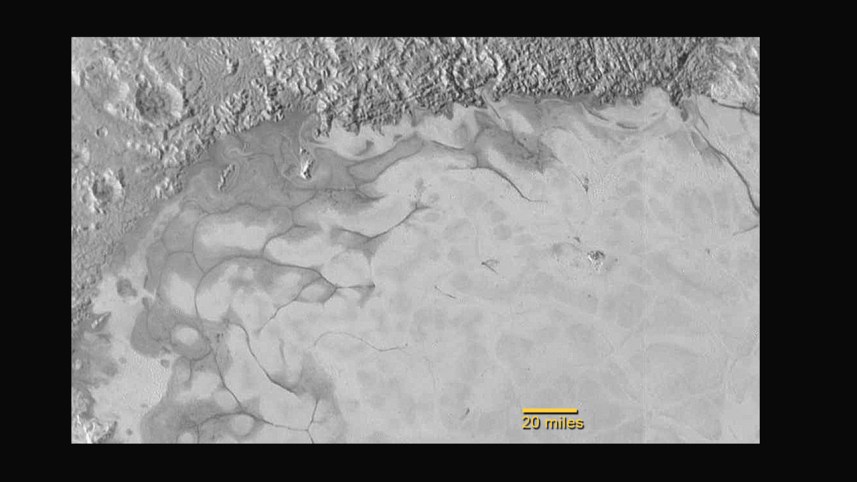 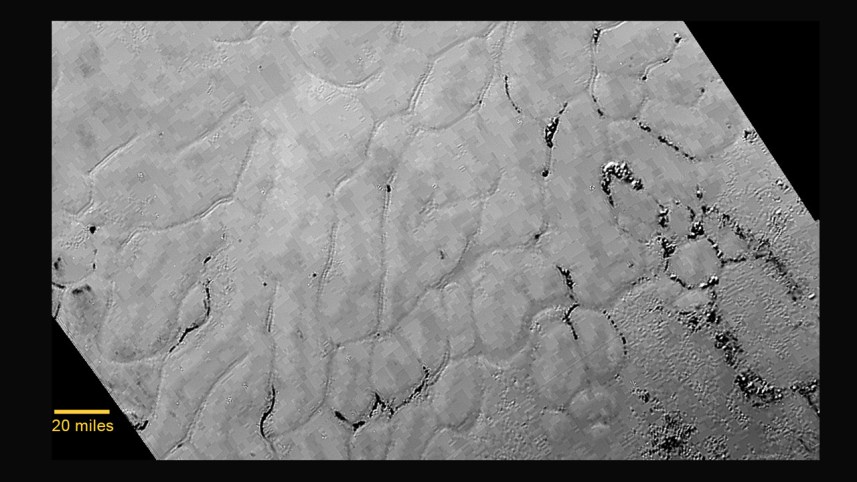 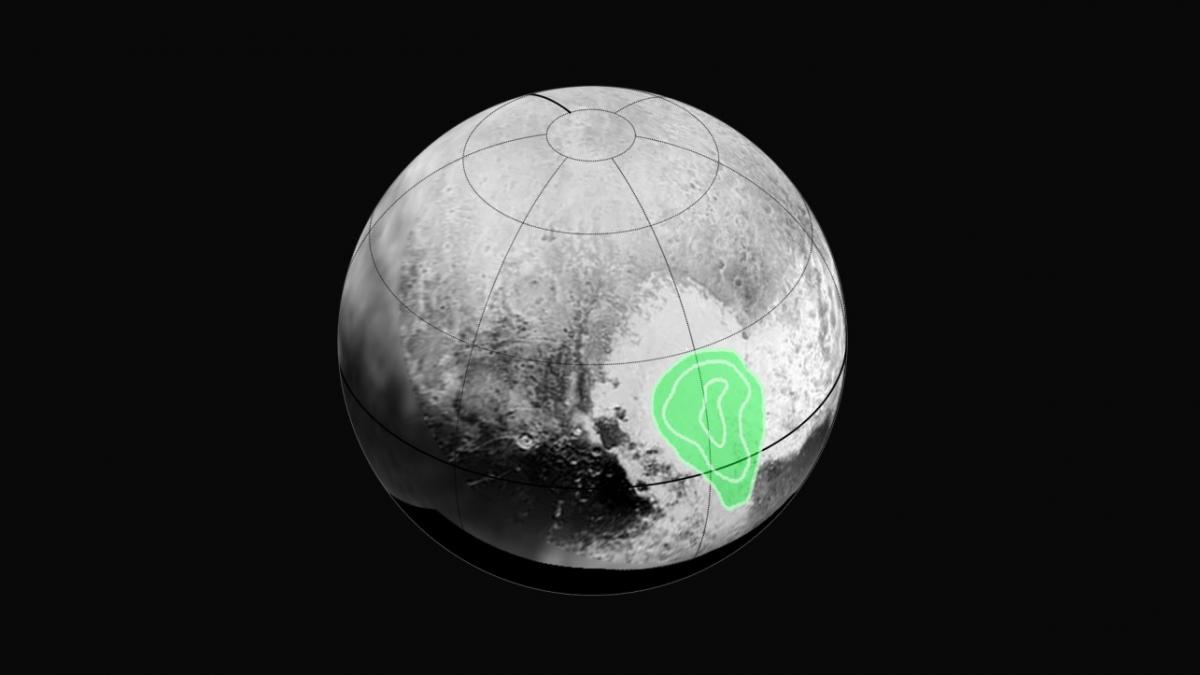 But by far the most provocative finding on Pluto was its lake of solid carbon monoxide. NASA had its first sign of carbon monoxide on Pluto in 1994. New Horizons confirmed: Pluto has carbon monoxide, and a lot of it, in the western lobe of Tombaugh’s Heart. NASA last updated its image of the carbon monoxide lake on July 30, 2015. And they never followed up on it.

How to explain these things?

The NASA scientists try to explain the heat on Pluto the same way they explain the heat at the Earth’s core. Pluto, they say, has a core with radioactive materials in it. As radioactive elements decay, they give off heat. True enough, some of the most productive deep-space rocket probes work that way.

So all that heat makes Pluto and Charon “geologically active.” The ice volcanoes, including Wright Mons, give the most spectacular evidence. Mountains rising 3.5 kilometers high, canyons seven to nine miles deep, and a subglacial ocean freezing and cracking the ice above it, give further evidence.

But of course New Horizons did not and could not do any kind of radiological survey. So how does anyone know any radioactive elements exist on Pluto? They don’t. They can only guess. The guess comes from an already weak theory of the origin of the solar system. Dust clouds came in from three separate directions, collided, then accreted. The dust held radioactive elements, supposed to form in the hearts of supernovae. Of course, no one can explain how dust clouds can collide and accrete. Besides, the planets differ too much in their chemistries for them to have all accreted from a combined dust cloud.

The Hydroplate Theory of the Global Flood suggests a better explanation. To explain Pluto properly, one must first know where it came from.

Pluto weighs 0.218 percent as much as Earth. At that, Pluto weighs more than any other single trans-Neptunian object. Indeed it weighs more than most of the “large” moons of Saturn – but less than any of the Galilean moons of Jupiter. The International Astronomical Union even “demoted” Pluto to its new “dwarf planet” status. They did this after the discovery of Eris, an object larger in diameter but lighter in weight. Neither object has “cleared its area,” in that all sorts of smaller objects litter their orbits.

The objects below are all far too heavy to have formed from ejected material from Earth during and after the Flood. (Some weigh many times the Earth!) So one may regard these as pre-Flood objects:

All other objects in the Solar system, together weigh not more than four percent of what the Earth weighs. So one has no reason to doubt they all formed during and after the Global Flood, not before.

When Earth first formed, it had a subcrustal ocean. Over at least 1500 years, the Moon “pumped” the crust with its tidal forces. So this ocean, confined and under pressure, heated to more than the critical temperature. Thus the ocean became supercritical water. And at a critical moment, the crust cracked open. The ocean exploded out of containment and eroded both sides of the crack. Most of the escaping water fell back as rain (and hail) or sloshed over the land. (The crust failure broke the land into the seven pieces we call “continents” today.) But much of the water escaped into space, and carried much rock and mud, and many trees and shrubs, with it. (It might also have carried some animal carcasses, though that would prove difficult to show.) Earth likely lost three percent of its total mass, and might have lost four percent.

Most of the debris that launched from Earth, escaped the gravity of Earth. Much of this merged under its own gravity to form the other objects in the Solar system today. These included:

And: it would form the asteroids, the comets, the meteoroids—and all the trans-Neptunian objects (TNOs). These included Pluto, the largest TNO in current catalogs.

Pluto formed as a lot of material accreted under gravity. Pluto also got a lot of iron rust, more than Charon got. This iron rust gives Pluto its ruddy color.

Two things combined to make Pluto hot. First, all that material falling into a ball, released a lot of heat. (The Law of Conservation of Energy says all energy must go somewhere.) Second, other, smaller objects bombarded Pluto as it grew from a swarm of accreta to the mini-world we know.

On July 18, 2015, three days after the release of the first “young Pluto” findings, Dr. Brown said this:

Because Pluto is the largest known TNO, it probably received more heat-producing impacts than all other TNOs as it grew from its swarm stage following the flood. All that heat would have melted some of Pluto’s internal ice causing delayed eruptions of slushy geysers on Pluto’s surface. Eruptions here on Earth produce volcanic cones and ash. On Pluto they produced icy mountains and snow storms that buried many craters.

So Brown predicted cryo-volcanism on Pluto before NASA and the JHUAPL confirmed it.

The heat, from both accretion and impacts, explains most of the striking findings by New Horizons. The carbon monoxide is another matter.

Carbon monoxide forms from the partial burning of wood and other plant material. Aristotle first noted that burning wood makes toxic fumes. The Romans often executed people by confining them to the hypocausis, or under-furnace, and closing all exits. And in the wild, any forest fire will produce more carbon monoxide than dioxide, as it consumes the oxygen.

In the case of Pluto, the heat of accretion must have started an underground fire. Uprooted trees, shrubs, and other vegetable matter supplied the fuel. The oxygen came from photolysis of water, or else escaped with the rest of the ejecta. Eventually the oxygen ran out, and the fire produced carbon monoxide. This escaped to the surface, condensed, and fell as rain into a basin in Tombaugh Regio. Then it froze.

Could the carbon monoxide have formed from sunlight acting on trace gas? Perhaps—but not in such great quantity. Nor has any official of NASA or JHUAPL ever tried to explain why so much carbon monoxide collected in such a vast lake on Pluto. Recall that they had that finding more than a year ago.

So what do we now know about Pluto? Pluto is young—younger even than the Earth. It formed far more recently than conventional astronomers suppose. It is geologically active—even the NASA and JHUAPL scientists admit that. And it holds the by-product of an underground fire that burned for a long time. A wood fire.

The history of Pluto also began with the most violent event in the history of the Earth—the one event that deserves the name cataclysm.