In the lead article of our March, 2003 issue, "Baby Picture," we focused on satellite pictures of cosmic microwave background radiation (CMB) that NASA scientists claimed were "the best "baby picture" of the Universe ever taken." In this issue we focus on another "baby," one of a dozen baby bristlecone pine (Pinus aristata) trees that are the subject of a recent, June 16, 2003, New York Times article. 1 This baby is about nine inches long with a green, bushy top and is the offspring of the oldest known living thing, a bristlecone pine tree named Methuselah."

Because of the remote location of Bristlecone forests (White Mountains of eastern California), you are not likely to have heard of or seen these trees, unless you are a creation scientist. For like the beauty of a flower, the incredible complexity of a living cell, the wonder of harmonious sound, and the perfect fit of the moon over the sun during a solar eclipse, these trees represent another "fingerprint" of God's wondrous creation. 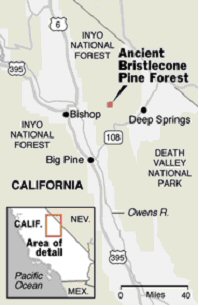 The Bristlecone pine became famous in scientific circles through the work of Dr. Edmund Schulman (1908-1958) of the University of Arizona. Through his study of their annual growth rings, a fairly precise method of dating has been obtained. During the summer of 1957, his last season of research, he discovered "Methuselah," a tree dating back 4600 years. 2 Though scientists continue to search the globe, 1 no older tree (or any other older living thing) has been discovered.

Animals and plants generally lose their ability to reproduce as they age. However, Bristlecone pines seem to be one exception, leading Le Roy Johnson, Forest Service manager of their preserve and former director of the Institute of Tree Genetics in Placerville, California, to state that they seem "capable of growing forever." 1 According to Mr. Johnson, the last time Methuselah is known to have reproduced itself (in the 1970's) "it had a 100 percent germination rate."  "That's more than we get on most trees, let alone the oldest tree in the world." All this begs the question, why are there no Bristlecone pines that are older than roughly 4,600 years?

Irish Archbishop James Ussher (1581-1656) used Genesis chapters 5 and 11 to compile genealogical chronologies that were widely accepted in his day. 3 Ussher placed the date of Noah's flood at 2350 B.C. and creation at 4004 B.C. 4  Other Biblical scholars have researched dates for the flood ranging from 3398 B.C. to 2348 B.C. and creation between 3760 B.C. and 5555 B.C. 2 Of course, these dates are scoffed at by "modern" evolutionists, but the Bristlecone pine research may actually verify them. 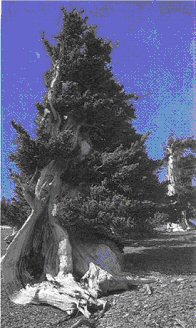 With "Methuselah" dating back to around 2600 B.C, it seems quite possible that this oldest of Bristlecone pines has been growing since right after the flood. The actual date may be adjusted for extremely wet years which occurred in the past, as shown by the numerous dry lakes in the desert regions of eastern California and Nevada. Experiments have shown that trees can grow an extra ring every one to four years during unusually wet seasons. 5  These varied conditions could allow a slightly more recent date, which may even closely match Ussher's date of 2350 B.C.

Some have suggested much older dates for the flood, and ultimately creation based on the record of rings found in dead Bristlecone wood. Flood dates in the range of 10,000 to 15,000 years before present have been suggested. 6 However, it could be possible that the preserved dead wood grew in the period before the flood. These pre-flood trees could have remained in the same vicinity probably anchored as stumps, for the period of around a year until the flood waters receded. If the dead wood was still viable for sprigs and seeds, this would explain the continued existence of the Bristlecone pine forest in the same location.

The fact that dead wood from both on the trees and on the ground, provide a tree-ring record going back to proposed dates of around 6800 B.C. or earlier 7 may or may not cause a problem for the Ussher dating. The same argument for multiple ring growth in wet years could hold for the dead wood. In addition, creation had to involve some superficial appearance of earth history. Trees were likely created with tree-rings already in place. Rocks would likely have yielded old dates by the faulty radioisotope methods in use today. Even man and animals did not appear as infants. Nevertheless, even with only minor adjustments in the growth-ring-to-year correlation, most creation scientists would have no problem with a date of creation in the 6000-7000 B.C. range. 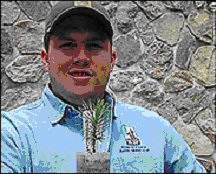 This month, a ceremony is being planned to recognize the new Bristlecone offspring, and one will be presented to the United States Botanic Garden on the grounds of the Capitol.1   While the world admires them for their great age, we should recognize these marvelous and now famous trees as a record of God's relatively recent creation. Dendrochronology is certainly a science that provides facts which should make evolutionists uneasy and bear witness to the truth of Romans 1:20, that we have no excuse whatsoever for not knowing and trusting God and His word.