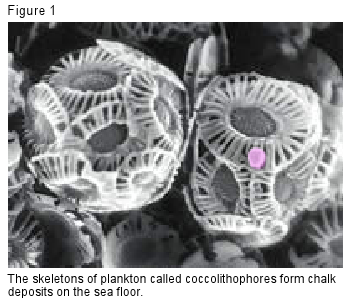 The geological time scale including most of the fossils is divided into three eras, the Paleozoic, Mesozoic, and Cenozoic eras. A few fossils are also found in pre-Cambrian strata, which are believed to have been formed before the Paleozoic era. These eras are subdivided into geological periods. The last period in the Mesozoic era is the CCretaceous period. This period is conventionally dated at between 145.5 million years ago to 65.5 million years ago, when it is commonly believed that the dinosaurs became extinct, possibly due to the impact of an asteroid. During the CCretaceous period, chalk deposits formed over most or all of the surface of the earth. These deposits indicate much about conditions existing at the time.

Chalk deposits form from the microscopic skeletons of plankton called coccolithophores, which accumulate on the sea floor when they die (Fig. 1). Coccolithophores are a kind of algae that have calcium structures called coccoliths around them. These structures fall off and accumulate on the ocean floor, forming chalk. Coccolithophores only survive in warm, sunny water. The chalk deposits are believed to have formed near the end of the Cretaceous period, and are dated from 100 million to 60 million years ago. The fact that chalk deposits are so widespread indicates that most or all of the earth was covered by warm water during this time. However, chalk deposits only form in relatively shallow water, because the skeletons of plankton dissolve if the water is too deep. The chalk had to have formed in water 200 to 300 meters deep, because this is the only way the skeletons of the plankton could have been so well preserved. The chalk is also very pure, indicating that land was far away and there were no sediments washing off the land to mix with the chalk (Fig. 2). 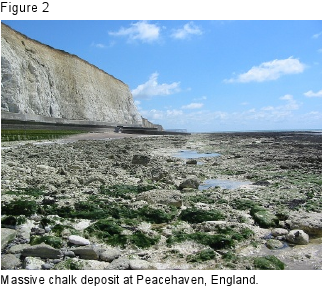 From a creationist viewpoint, these findings show that much of the earth was covered by water during the Cretaceous period. For example, geologists state that “most of Britain was under water and evidence of shorelines was scanty even in the western outcrops and near Scotland”. 1 The fact that the land was far away from these chalk deposits shows that essentially the whole earth was under water. Therefore this period must have taken place before or at the end of the flood, because afterward the Lord promised that there would no more be a flood to cover the surface of the earth (Genesis 9:11). This also raises the question how land animals could have survived in the conventional model when all or almost all of the earth was under water.

How could so much chalk have formed so quickly? After the flood the oceans would have been warm and filled with organic matter. Thus conditions would have been favorable for plankton blooms and chalk could have accumulated rapidly. In fact, it is hard to see how the chalk could have formed slowly. Even if the chalk formed far from land, in water only 200 to 300 meters deep one would expect many clam shells, snail shells, worm holes, and fish bones to accumulate on the bottom and be mixed with the chalk. The purity of the chalk shows that it had to have formed quickly. Sometimes well-preserved and large fossils are found in the chalk, consistent with its rapid formation. It is believed that some asteroids hit the earth at the close of the Cretaceous period and led to the extinction of the dinosaurs. Probably asteroids were striking during the flood but only those that hit near the end have left any evidence. 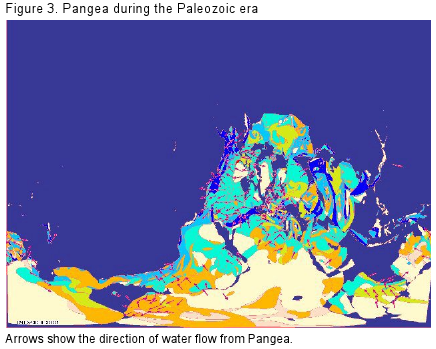 It is interesting also that coral formations give evidence of the sequence of events in the flood. Most coral only grows in shallow water. Certain kinds of coral reefs, called atolls, form on top of submerged mountains (Fig 4). These formed as the mountains descended or the water level gradually rose. This shows that the oceans were shallower in the past, but the ocean floor sank slowly enough that the coral could keep up with it. Sometimes the ocean floor descended faster than this and the coral could not keep up. 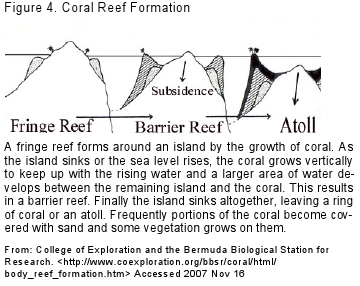 Geologists are finding evidence of massive floods in the past. For example, Richard Kerr provides evidence that the British Isles were separated from the continent by a massive flood. 3 Also, geologists believe that great eruptions of magma on the sea floor caused the ocean to rise as the continents separated during the Cretaceous period, explaining why sediments are found on the continents and not on the floor of the ocean. In the flood model, this would be explained because the “fountains of the great deep” breaking up (Genesis 7:11) would have caused water levels in the ocean to rise as the rain fell, containing the sediments on the surfaces of the continents. A problem for conventional geology is that at current rates of erosion the continents should have eroded away many times during the time that they are assumed to have existed. Also, sometimes entire geological layers are missing for many miles in all directions with no evidence of erosion. Geologists believe these layers formed and then eroded away, but if so, why is there little or no evidence of erosion between the layers?

As for astronomical evidences, Kerr also gives evidence that the massive cratering on the moon and in other planets originated in the asteroid belt. 4 Kerr suggests that a collision in the asteroid belt produced the asteroids that led to the extinction of the dinosaurs at the end of the Cretaceous period. 5 He also points out that small asteroids tend to be more widely dispersed than large ones in the asteroid belt, an effect of the sun’s energy pushing away the smaller asteroids. However, this observation can also be explained if one assumes that this collision, or breakup of a planet, happened very recently and the small asteroids were propelled farther than the large ones. This breakup of a planet could have happened during the flood when rates of radioactive decay were accelerated, possibly due to an increase in radiation reaching the solar system. Another evidence for this is the tremendous energy emanating from Jupiter’s moon Io; this is far too large to have continued for millions of years. 6 This could have been caused by an increase in the decay rate heating up the moon Io. In fact, even on earth, more heat is found leaving the surface of the earth where the concentration of radioactive rocks is highest. This should not be so if these rocks were slowly decaying for millions of years. Where could all this radiation reaching the solar system have come from? Astronomers have observed a star whose pole points almost directly at the earth. 7 If such a star happened to become a supernova, large quantities of radiation could have been directed at the earth, and such an event could also have a role in last day events and the breakup of the earth at the second coming of Christ.

Thus there are geological evidences that are consistent with a flood scenario and even easier to explain in that way than in the conventional millions of years of geological time. Even astronomical findings can give insight into the mechanism and sequence of events in the flood.