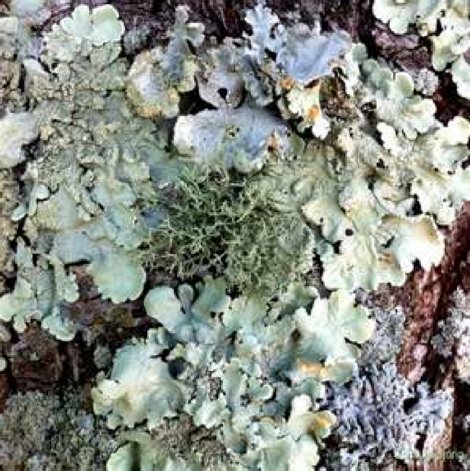 Symbiotic relationships may be categorized as mutualistic, commensal, or parasitic. Mutualism is the way two organisms biologically interact where each individual derives a fitness benefit (i.e., increased reproductive output). Commensalism is a class of relationship between two organisms where one organism benefits but the other is neutral (there is no harm or benefit). Parasitism is a type of symbiotic relationship between organisms of different species where one organism, the parasite, benefits at the expense of the other, the host.

Lichens (Fig. 1) are the result of an alga and a fungus growing mutually together. The two organisms form lichen structures that are only possible when the alga and fungus unite. The fungi involved in lichens are seldom found growing separate from the alga, but together these two very different organisms produce another organism that has some interesting characteristics. The chemicals resulting from their interaction are unique, including chemicals with antiseptic properties, dyes, etc. They are capable of surviving extreme climactic conditions. In some lichens, nitrogen is captured from the air and converted into forms usable by plants. Lichens are often first invaders in ecological plant successions (establishment of vegetation on harsh environments such as rocks).

Some evolutionists are now saying that lichens gave rise to plants. I believe this is a totally unfounded claim. What seems to continue to happen, since evolutionists have no real scientific evidence for origins, they can make up any conclusion they want. Unfortunately many will believe anything. Believing what their itching ears want to hear, as the apostle Paul said.

During my 40+ years of scientific research, I specialized in the study of fungi 1 and their interactions with plants and some insects. 2 I particularly studied parasitic and mutualistic reactions. One such parasitic relationship is a fungus called a “rust” fungus because it produces reproductive structures on plants called “pustules” (Fig. 2) that contain fungal spores. In earlier times when someone walked through wheat fields and brushed against infected wheat plants, the spores would appear on their clothing like rust from a rusty piece of metal, thus the name “rust” fungus. I studied several “rust” fungi with the aid of light and electron microscopes. 3 By using these instruments I could observe the intimate interaction of the fungus with the cells inside of a plant.

Figure 2 - Three magnifications of rust pustules on a leaf. Orange areas are rust spores inside the pustule.

The tenants of biological evolution would suggest that such relationships, during the coevolution of both plants and fungi over millions of years eventually resulted in the establishment of the fungus invading, parasitizing, and using nutrients from the plant for its own reproduction. If we analyze what is known about these fungal plant interactions, there are some very interesting phenomena involved that suggest an involvement much too complex to have happened by accident. First and foremost, rust fungi are obligate parasites. This means the fungus can grow, survive, and reproduce only on a host plant; the fungus will not grow in any other environment such as on a culture medium as other non-obligate fungi are capable of doing. Furthermore the plant host and particular fungus are usually uniquely paired. In other words, only one specific “rust” fungus will infect and reproduce only on specific plant species, such as wheat rust, corn rust, soybean rust, etc. The fungal plant interaction is so delicate that the fungus, using either enzymatic processes or osmotic pressure, penetrates the plant cell wall (mostly composed of cellulose, a complex carbohydrate of long chains of sugars) but does not penetrate the cells lipo-protein membrane. 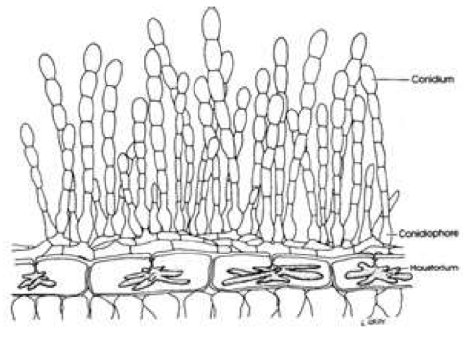 Figure 3 - Plant cells with haustoria (finger-like structures inside cells) with the fungal spore bearing structures on the surface of the leaf.

The fungal structure that invades the plant cell is called a haustorium (Fig. 3). Haustoria take several forms but mostly look like fingers invaginating the plasma membrane of the plant cell; it is as though the membrane is like a balloon and fingers were pushed into the balloon without bursting it. This delicate interaction of the fungus next to the cell membrane enables the fungus to extract nutrients it needs for growing and making reproductive spores without initially harming the plant cell. In this kind of interaction the host plant is considered to be succeptible to the fungus because the fungus keeps the plant alive until it obtains enough nutrients to make reproductive spores that are able to infect the same plant or a similar plant of the same species, then subsequently makes a different spore type that usually becomes dormant (called a resting spore) for future infection of the same host or another host plant.

In genetic breeding of certain varieties of susceptible plants involving cross pollinating same-species plants, the resulting crosses produce plants in which the fungus establishes a haustorium inside the plant cell, but the plant “rejects” the invasion and the cell dies; subsequently the fungus does not receive nutrients and it dies without producing spores. 4 In this relationship the host plant is considered to be resistant to the fungus, similar to humans having resistance to certain fungal, bacterial, of viral infections. In these interactions the plant resistance suggests that originally these plants were resistant to the fungus but became susceptible as a result of human intervention, i.e., breeding plants for characteristics beneficial to humans. Again this suggests that the interaction was not a natural result of chance-time, as evolution theory would conclude.

One rust fungus I studied involved a fungus that produces five different spore types on one host, white clover. 5 Some “rust” fungal-plant interactions involve more than one plant species in which the fungus produces spore types on one plant and other spore types on another unrelated species of plant. There can be five or less different spores types produced by the same fungus (Fig. 4). In these interactions certain spores produced on one host plant are not able to infect the host on which they are produced but can only infect the other host plant known as the alternate host, and likewise the spores produced on the alternate host can only infect the other host, not the one they are produced on. This relationship gets even more interesting because in some cases the fungus alternates between two different species of angiosperm (flowering) plants; an examples of this is the wheat/barberry “rust” disease. In other cases, the fungus alternates between an angiosperm plant and a gymnosperm (cone bearing) plant; examples of this include the cedar-apple (it is actually the apple-juniper “rust” disease) and the oak/pine “rust” disease. 6 Now to add another twist to the story there are examples of angiosperm/gymnosperm fungal interactions with certain spores types being produced on the two host plants and then a different angiosperm/ gymnosperm “rust” interaction with the spore types reversed on the two other host plants. All of these fungal-plant disease complexes, according to evolution theory, happened as a result of random chance over long periods of time. The Creation conclusion could be that these complex, intricate relationships are more likely the result of a designer. 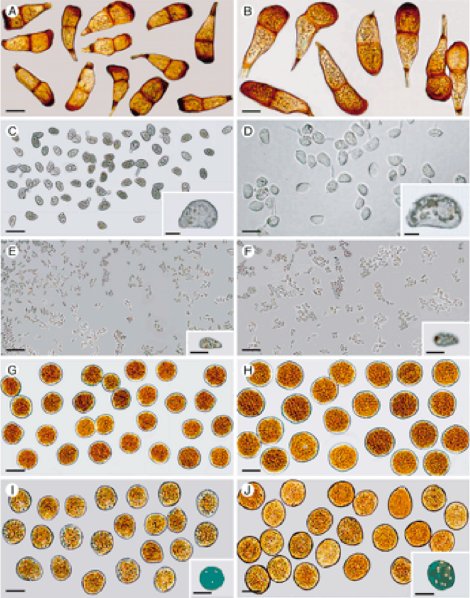 Another fungal-plant interaction I have studied involves the mutualistic relationship of a fungus with the roots of both angiosperm and gymnosperm plants. 7 These are known as mycorrhizal relationships. Myco (Gr.) means fungus and rhizal refers to plant roots. In these fungal plant interactions (there are several different fungi and several different interactions), a fungus juxtaposes with the roots of a plant, with the plant providing nutrition for the fungus, and the fungus aids the plant in the uptake of phosphorus and other minerals from the soil. Phosphorus is essential in biological systems, particularly in the formation of DNA. In some cases, the fungus encases plant roots and provides a protective barrier against harmful organisms and root damage. There are two unique and different kinds of mycorrhizal formations. In one instance, the fungus totally encases the root but has little or no other intimate interaction with the root; whereas in other mycorrhizal interactions, the fungus invades the plant root and forms haustoria (arbuscules) similar to those produced by “rust” fungi (Fig. 5). 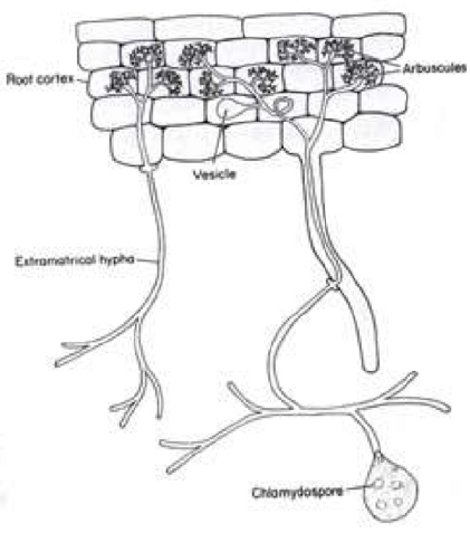 All mycorrhizal relationships are mostly underground where most roots are located; however, some of the fungi in these associations may seasonally produce above ground mushrooms or puffballs (Fig. 6). 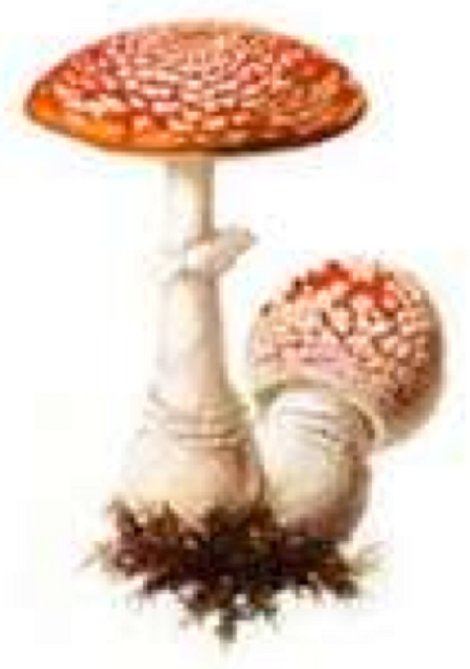 Figure 6 - A mushroom (Amanita species). One of many fungi forming mycorrhizal relations with plant roots.

There are various fungi that grow on or in insects. I have studied a particular fungus that grows on a certain ant species (Fig. 7). 2 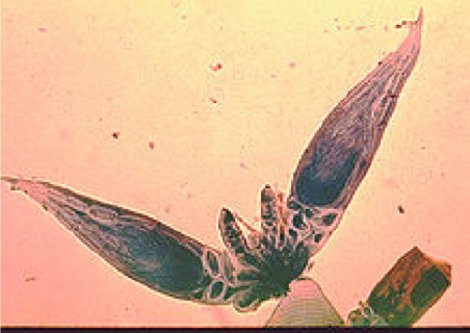 Figure 7 - Herpomyces: A fungus that grows on the exterior of an insect.

This particular fungus grows only on the external body of a specific ant. The fungus grows on almost all parts of the ant, however no evidence of harm to the ant has been shown. There are other examples of these fungi where the fungus is located only on very specific parts of certain insects, for example a beetle with the fungus only on the hind leg of the male and only on the abdomen of the female, suggesting that the fungus is transmitted from male to female during copulation, a sort of STD of the insects.

All of these examples I have given are certainly worthy of contemplation if just for their curious nature. They all perhaps should cause us humans to wonder if the Creator has a wonderful sense of humor and has provided us with yet more examples of His marvelous handiwork. In simpler terms, the mechanism of natural selection, central to evolutionary theory, cannot possibly account for the development of these varied and complex life forms simply by mutations in DNA. Rather, some conscious design, thus requiring a Designer, is necessary to explain the emergence of these life forms and interrelationships.