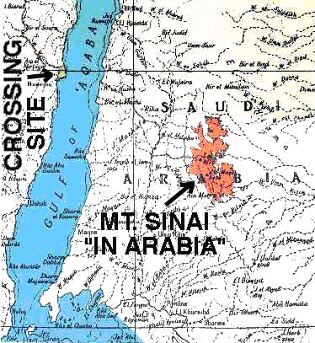 Another example of a Biblical reference which men have tried to prove is the so-called Mountain of God. This mountain, referred to as Horeb or as Mt. Sinai in the Bible—Mt. Sinai is in the Horeb mountain range—is the place where God spoke with Moses in the burning bush and Moses received his commission to deliver the children of Israel out of the slavery of Egypt. This is the mountain on which God gave Moses the Ten Commandments. Briefly, the story is that at God's command Moses went up onto the mountain, leaving Israel below, and while Moses was gone, the Israelites built a golden calf to worship.

Smoke and lightning and fire are associated with this mountain:

Exodus 19:17-18. And Moses brought forth the people out of the camp to meet with God; and they stood at the nether part of the mount. And mount Sinai was altogether on a smoke, because the LORD descended upon it in fire: and the smoke thereof ascended as the smoke of a furnace, and the whole mount quaked greatly.

Near Jebel el Lawz has been found an ancient altar with pictures of cows on it. This seemed strange, according to Wyatt, Williams, and Cornuke, for cows are not common to this region. Some have suggested that this might be the altar to the Golden Calf mentioned in the Bible (Exodus 32).

Jebel el Lawz has a row of stones surrounding it which fit the description of the marker stones placed around Mt. Sinai in the Bible (Exodus 19:23). (Incidentally, the locals call this mountain Moses' Mountain.)

And on the mountain itself is a most amazing thing. The top of Jebel el Lawz is not the same color as its base. The top of the mountain looks scorched. Cornuke described a rock from the mountain as having a melted, dark exterior, and a light interior.

You can see pictures of this mountain on the Web. One place is http://www.wyattarchaeology.com/sinai.htm

But there are others. Just do a Web search on Sinai and include the names of researchers/explorers Ron Wyatt, Larry Williams, or Bob Cornuke.

Other evidence in support of Jebel el Lawz as the Mt. Sinai of Exodus is that Mt. Sinai is stated to be in Arabia according to Galatians 4. Scholars say that at the time Paul wrote his letter to the Galatians Arabia would not have included what we refer to today as the Sinai Peninsula. Another point they make is that the children of Israel are described as having left Egypt, but at the time they left, the region of today's Sinai Peninsula was controlled by Egypt.

The Bible describes Mt. Sinai as being at the back of a desert (Exodus 3:1). Wyatt, Williams, and Cornuke point out that Jebel el Lawz is at the edge of a desert.

Leaving the vicinity of the Red Sea and trying to follow the route of the children of Israel, Williams and Cornuke came to some springs where the water was bitter. This they compare with the Biblical description of the bitter water in Exodus 15:22-23.

Exodus 15:27 tells of Israel passing through an area where there were springs and palm trees; Williams and Cornuke say they passed through a group of springs and a grove of palm trees. The Bible says Israel camped there; the explorers say they found caves at the site, where a worker told them that cave writings said that Moses and the Hebrews had come through the area.

Figure 2 - Egyptian-style petroglyph of cow or bull on the altar at Jebel el Lawz, not found anywhere else in Saudi Arabia. From the Wyatt Museum.

What do we see here? If we can believe these men, we see corroboration of the Bible, we are seeing more evidence for the accounts of Exodus.

The interesting thing is that Williams and Cornuke departed from conventional wisdom to search for the mountain of God by exploring a different region than the area of modern Mt. Sinai. They based their directions on the account given in the Bible. They appear to have succeeded.

(You can read more about the expedition of Williams and Cornuke in the book The Gold of Exodus by Howard Blum.)