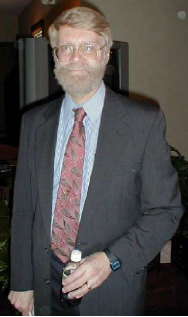 The young earth approach to questions on origins often start with the following assumptions: (1) scripture is absolute and the final authority on all subjects about which it has spoken clearly (sola scriptura); (2) scripture speaks clearly about the events of creation week and the Flood (perspicuity); (3) whatever scripture teaches clearly is considered undeniable fact which science may help to explain (ministerial use of reason) but can never contradict or refute. Scripture constrains science to what explanations are possible; (4) teachings of scripture should be held firmly while theories of science are held loosely (“If you marry your theology to science today, you’ll be a widow tomorrow”); (5) science changes, scripture remains the same; and (6) scripture is absolute truth from a perfect God; science is tentative truth from a fallen man. It should be noted that point #4 also applies to scientific theories made by young earth creationists; only the scriptures are absolute. Even if a scientific theory explains all the known data, makes predictions that have been confirmed, and is consistent with scripture, it must still be viewed as tentative because there may yet be facts yet undiscovered which will not agree with it. For this reason, the theories of science (young earth, old earth, etc.) must never been considered equal in authority to scripture.

The first prediction concerns the nature and magnitude of planetary magnetic fields. Most of us played with magnets as children or perhaps remember studying them in physics class. Recall that “bar” magnets are conceived as having “north” (N) and “south” (S) poles. Like poles of different magnets repel (e.g., N-N) while opposite poles attract (e.g. N-S). The invisible “force field” surrounding magnets can be described mathematically and is called a magnetic field. The speed and direction of charged particles (electrons, protons, etc.) can be altered by magnetic fields. On the other hand, the circulation of charged particles (e.g., electrons through a coil of wire) can generate magnetic fields. Objects that have two magnetic poles like a bar magnet are called dipoles. It turns out that the most of the planets and moons in the solar system have magnetic fields that act like dipoles. Unlike bar magnets however, planetary magnetic fields vary with time. Dr. Humphreys has devised a biblically consistent scientific theory to explain the origin and decay of planetary magnetic fields over time as well as field reversals during the Flood. 1

The features of Dr. Humphreys’ theory include:

Hence the initial field strength of a planet’s magnetic field would depend upon how much water it was made from. The decay rate of a planet’s magnetic field would depend upon the electrical resistance of the core material, determined by its composition. With this information, the present strength of a planet’s magnetic field could be predicted assuming the planet was created 6,000 years ago (if, in fact, the solar system is young). The result? The theory accurately predicted the previous field on Mars as confirmed by Mars Global Surveyor, 2  the magnetic field strengths of Uranus and Neptune as confirmed by Voyager 2, 3  and explains the present and former fields of moons and planets with slow rotation. The latter success is important because rival “dynamo” theories, which assume planetary magnetic fields depend on the rate of planetary rotation, mis-predicted the magnitude of fields where the rotation speed was slow.

The fact that the theory explains the data and made accurate predictions supports the validity of the theory and lends support to the young earth interpretation of Genesis. The earth’s field supports a young earth in another way. Extrapolating the earth’s field strength backward in time using its present decay rate indicates the field could not be much older than tens of thousands of years. This is due to the fact that the heat resulting from resistance to the electric current eventually exceeds the melting point of the earth when the current becomes too great.

There is good evidence that the earth’s magnetic field has reversed several times in the past. The dynamo theory holds that the molten material in the earth’s core is circulating ions unevenly, thereby creating an electric current and magnetic field. As the intensity of the main magnetic field decreases, secondary fields form which have the same energy as the energy lost from the main field. At some point, these “reservoirs” of magnetic field energy can rebuild the main field but with the opposite polarity, thereby accounting for past magnetic field reversals. This main field-secondary field energy exchange is how the dynamo is supposed to sustain itself over billions of years, with reversals occurring over several million years. However, recent measurements of the field strengths of the main and secondary fields over a 30 year period have shown the total field energy (main + secondary) is decreasing, making the perpetual dynamo impossible and limiting the age of the earth’s magnetic field to thousands of years. 4  Additional measurements have shown that the “missing” energy is being lost as heat. This outcome is expected from The Second Law of Thermodynamics, which says that all natural processes loose some energy as heat. Some have suggested that a planet’s rotation could restore the original field strength after reversal, but as we have seen, Dr. Humphreys believes that the earth’s magnetic field reversed several times during the Flood, when global tectonic activity may have caused circulation of the core fluids temporally giving rise to magnetic reversals. 5  That rapid reversals have occurred in the past is evidenced by remnant magnetic fields in small lava pools that must have cooled rapidly (in days) where the orientation of remnant magnetic fields (imprinted by the earth’s external magnetic field at the time of solidification) varies by as much as 90 degrees.

Hence, the Decaying Current model of planetary magnetic fields explains the origin and magnitude of planetary magnetic fields, including those generated by planets and moons with slow rotation. The model also explains rapid field reversals and has made accurate predictions concerning the field strengths of several planetary bodies. Another prediction of the theory will soon be put to the test, possibly as early as January 2008, when NASA’s MESSENGER mission to Mercury will measure the planet’s magnetic field. 6 ,7

The second prediction is that the universe has a rotation axis. As stated above, Dr. Humphreys believes that the original created matter was a rotating ball of water with a magnetic field. As described elsewhere, Dr. Humphreys believes that God used a white hole to unfold the universe to its current state. His theory offers a solution to the starlight-time problem within the young earth framework. 8 ,9  If the universe does have a rotations axis, where might evidence be found for it? It turns out that the CMB (Cosmic Microwave Background) radiation, the alleged echo of the time when the universe was first cool enough to allow matter to form from plasma, is polarized. 10 ,11  For our purposes, polarization just means that the light has direction in it. 12  Big Bang cosmological models assume that the universe is the same everywhere, that there are no special places such as a center, an edge or an axis to the universe. However, Dr. Humphreys’ white hole cosmology predicts the universe is finite and bounded; that it has a center, an edge, and a rotation axis. The polarization of the CMB is consistent with a cosmic rotation axis and/or a pervading cosmic magnetic field. It also turns out that light from galaxies is also polarized. 13  The magnitude of the polarization increases with the distance to the galaxies, making a local cause unlikely. Indeed, enough evidence for a cosmic axis has mounted that many secular cosmologists make reference to the “axis of evil”. 14  The reason they refer to the axis as “evil” is that if confirmed, the axis will contradict the basic assumption that the universe is the same everywhere, an assumption crucial to Big Bang scenarios. However, the existence of a cosmic axis is completely consistent with and even predicted by some creationist cosmologies, such as Dr. Humphreys’.

The final prediction we will discuss deals with the diffusion rate of helium gas through zircons. 15 ,16  This subject has implications for the rate of radiometric decay in the past. Helium gas is a by-product of radioactive elements such as uranium and radium that undergo alpha decay. It turns out that there are tiny crystals of zirconium silicate (called zircons) that occur in granites and may contain up to a few percent uranium in their crystal lattice. As the uranium decays, helium builds up inside the zircon. Eventually, the helium diffuses out of the zircons into the surrounding rock. Dr. Humphreys lead a team that investigated the speed at which helium diffuses through zircons. They studied zircons from a borehole thousands of feet deep where conventional radiometric dating put the age of the rocks at 1.5 billion years. They examined zircons from various depths and temperatures. They tested the zircons for helium content and found that the zircons contained less and less helium with increasing depth and temperature. This was expected because the rate of diffusion should increase as the rock gets hotter. The coolest zircons contained ~80% of the helium expected from the amount of radiometric decay based on the measured uranium and lead (the final decay product of uranium). Studies showed that the amount of helium in the rock surrounding the zircons was less than that in the zircons demonstrating that helium was diffusing out of the zircons, not vice-versa. The question was then how fast  does the helium diffuse through zircons. Dr. Humphreys then predicted what the diffusion rates would be as a function of temperature assuming the rocks were 1.5 billion years old and assuming they were only 6000 years old. Dr.  Humphreys team then had a contract lab experimentally determine the diffusion rate of helium through zirconium silicate at various temperatures. The results are shown in Figure 1. 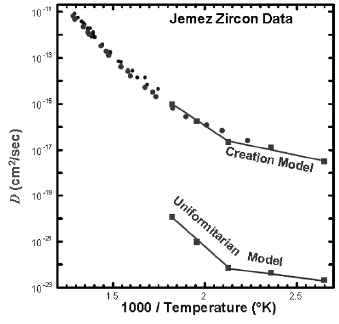 Reciprocal temperature is plotted on the horizontal axis and the diffusion rate on the vertical; hence the temperature increases going from right to left. The square boxes are the predicted values of the diffusion rates as a function of temperature for the creation model (6000 years) and uniformitarian model (1.5 billion years). The round dots are experimental data. As can be clearly seen, the data closely overlap with the predictions based on the creation model (6000 years) and are no where near the values expected for the uniformitarian model (1.5 billion years). Hence, according to the diffusion rate data and the amounts of helium detected in the zircons, the zircons are only about 6000 years old! The implication is that the nuclear decay of uranium was accelerated in the past.

In summary, we have considered three scientific predictions that were based on sound science and a young earth interpretation of scripture. In each case, subsequent studies showed the predictions were correct. Stay tuned this January to see if Dr. Humphreys’ prediction concerning the strength of Mercury’s magnetic field will be born out by the Messenger probe.