As with other models, there have been criticisms and questions raised regarding the theory. Edward Isaacs published an article questioning the theory’s proposed formation mechanism for the Pacific trenches. Isaacs’s article can be obtained here: https://creation.com/images/pdfs/tj/j32_3/j32_3_58-63.pdf

Below is Bruce Armstrong’s letter to the editor [published in J Creation 33(2):61–62, 2019] in rebuttal to Isaacs’s article. It is presented here with Armstrong’s permission. Spelling, punctuation, and styles used in the original publication have not been edited.

First, I would like to thank Issacs for his brief summary of Walt Brown’s Hydroplate Theory (HPT), which is mostly correct. However, Issacs’ entire paper is based on his incorrect claim that HPT requires a trench that is antipodal to the Mid-Atlantic Ridge (MAR) system. As this letter will show, Walt Brown clearly illustrates in his book In the Beginning that this system is not part of HPT. 1

Issacs begins building his case by quoting passages from pages 155 and 159 of Brown’s book. He claims that they "identify two major locations for trench formation". He then claims that the trenches within the Pacific Plate must be antipodal to the MAR.

Brown simply says that much of the Pacific plate, centred around a position opposite the middle of the Atlantic floor, sank and cracked, forming "fractures in millions of places". These fractures are the same ‘trenches’ referred to in the earlier quote. He does not claim that this subsidence resulted in a major trench system being formed in exact antipodal positions to the Mid-Atlantic Ridge (MAR) as Issacs proposes. In fact, Brown does not even mention the MAR in this context, but merely indicates the centre of the Atlantic floor. Brown goes on to explain that the deepest trenches opened up primarily around the west, north and east edges of this sinking plate, exactly as one would expect if a large three-sided ‘flap’ of the crust subsided and then later was lifted. This is why Brown has no illustrations showing a Central Pacific Trench system and Issacs has had to create his own graphics for his Figures 6, 7 and 8. Issacs could have easily seen that he had misinterpreted Brown by examining Brown’s own graphic (figure 83) on the previous page (p. 154), as shown below. 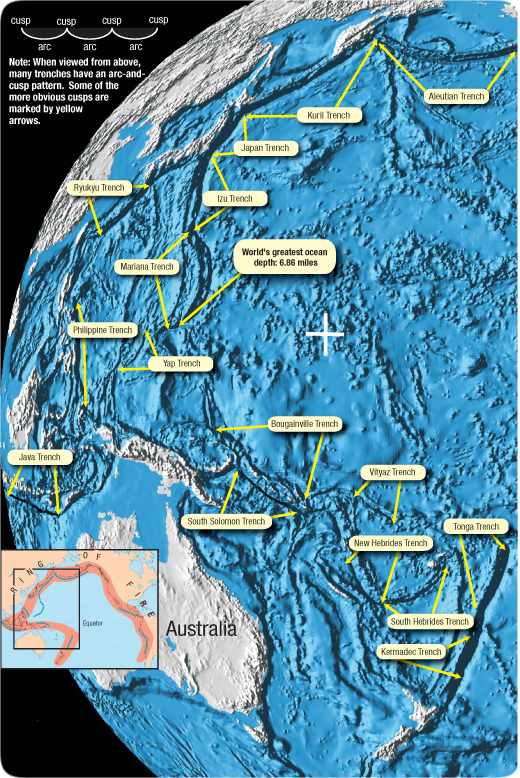 Brown’s Figure 83 shows the actual location of the edge subsidence trenches as they are today as well as some of the major internal trenches such as the Mariana and Vityaz Trenches. The smaller inset map of the Ring of Fire indicates Brown’s proposed edges of the subsided plate. There is also a white cross on the main map. Brown’s caption explains that “the white cross marks the centre of this concentrated trench region”. This cross, at 10N 159W, is antipodal to 10S 21.5W which Brown identifies on page 161 as the centre of the Atlantic. If one checks this out, one will see that Brown’s Atlantic position is about 10° west of the MAR at that latitude. Brown was making no attempt to link his white cross with a specific trench or even its antipode, the MAR, as Issacs is claiming.

The actual Pacific Ridge system that Brown accepts is clearly illustrated in his Figure 44, page 114. In the caption below this image, Brown comments: “Also notice the different characteristics of (1) continents and ocean basins, and (2) the Atlantic and Pacific Basins.” So he is fully aware that the ridge placements in these two basins are very different. Figure 44 shows a Pacific Ridge, not a Trench, formed by similar processes to the Mid-Atlantic Ridge, partly beneath western North America, then extending south from the Baja Peninsula off South America and crossing the South Pacific/Southern Ocean below New Zealand (see p. 127 and its Endnote 49 for confirmation). Brown’s theory actually attempts to explain why these basins are very different. He does not impose an antipodal MAR onto the Pacific basin as Issacs does. 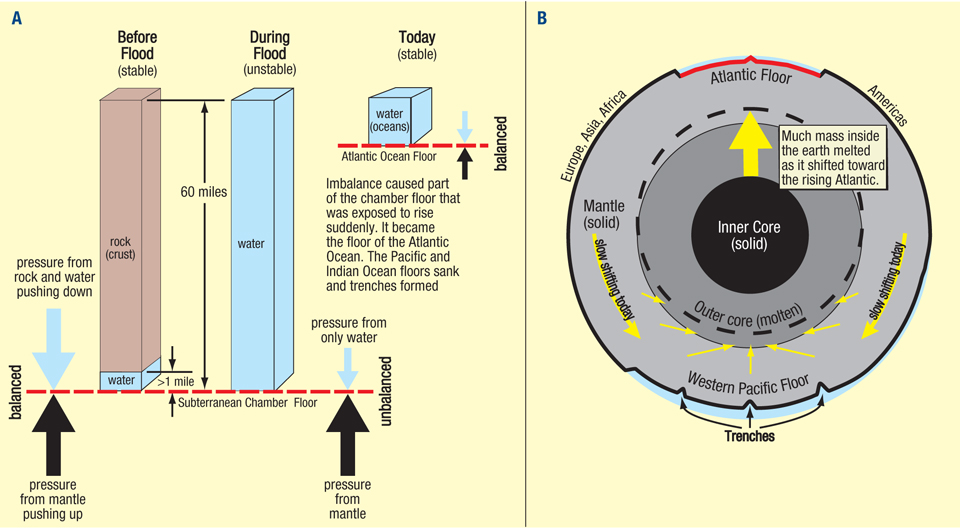 Figure 85: "Hydroplate Explanation for Trenches (Part B). During the flood phase, the escaping subterranean water eroded and thinned the preflood crust to a thickness of about 48 km. Frictional heating from movements near the centre of the earth began melting solid rock which then contracted ... . This caused the crust on the Pacific side of the earth... to subside by at least 48 km, fracturing the Pacific plate at thousands of places within the boundaries of the Ring of Fire! (Mountain High Maps c 1992-2019 Digital Wisdom Inc.)

Issacs’ Figure 4 seems to support his MAR copy claim, as it appears to represent Brown’s Figure 85. Figure 4 clearly shows a Central Trench Complex and Issacs’ caption below says that HPT has a "Central Trench Complex mirroring MAR". Attached below is Brown’s actual Figure 85, including its caption. In contrast to Issacs’ altered image, there is no mention anywhere of a 'Central Trench Complex' on it, nor anything to suggest that such a complex, if it had ever been proposed by Brown, would mirror the MAR, nor does it identify any other trench complexes. Instead, all three indents are merely marked as trenches, and Brown’s actual caption says that the subsiding of the Pacific plate resulting in “fracturing the Pacific plate at thousands of places within the boundaries of the Ring of Fire!” The three trenches in the illustration merely represent some of these fractures in the Western section of the Pacific Plate, as identified in both versions of this image. Issacs’ modifications of Brown’s illustration and caption are misleading.

In addition to Issacs’ invention of the non-HPT antipodal MAR, his article has other errors. The caption under his figure 5 claims to show the 'motion of the MAR'. Presumably he means 'position'. In figure 6 he claims to show a mirror image of the MAR superimposed over the Pacific Basin. But it is not a ‘flipped’ mirror image. It is merely a ‘straightened’ version of the MAR that has been rotated longitudinally by 180°. In Figure 8 he claims to show the antipodal positions of the MAR. But it is only his rotated MAR again. An antipodal MAR would also need to be flipped north to south. And note that Issacs’ proposed alternative mid-Pacific Trench shown in figures 7 and 8 is neither predicted nor required by HPT.

To recap this, Brown did not propose a Mid-Pacific Trench which was an antipodal Mid-Atlantic Ridge. Issacs proposes this, then points out that it does not exist and unreasonably concludes that “These issues challenge HPT’s overall plausibility...” In reality, Issacs’ ‘challenge’ is meaningless.

Brown’s Hydroplate Theory provides us with a unique, and in my opinion valuable, model of the mechanisms of the Great Flood, and it deserves honest and intelligent discussion.